An online exhibition exploring the intersection of heartbreak, line break, and break the internet 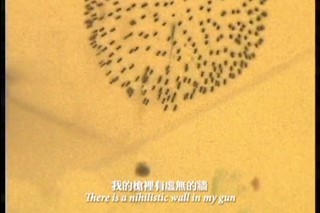 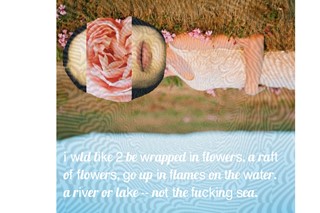 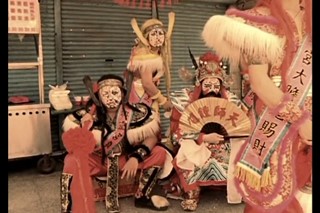 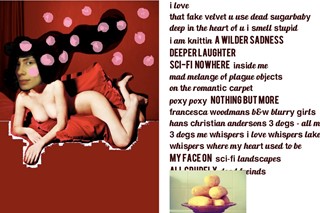 Many a poetry lover will know, a poem isn’t only the words that compose it: the materials in which the poem is embedded, or its technologies of publication, are just as integral to the poem as the language it employs. As London-based writer Harry Burke points out, there is no natural or neutral “blank page”: every publishing decision is a choice that shapes the nature of the piece.

An online exhibition curated by Harry Burke and co-presented by Rhizome and the New Museum in New York as part of their First Look series, Poetry as Practice releases a new online poem by a different poet each Monday through 6 April, totaling six poems. Using the web not as a blank page but as a digital media environment, the varied poems draw attention to the conditions of their production and circulation.

In Alex Turgeon’s piece “Better Homes and Gardens Revisited,” GIFs feature animated calligrams roping through barred windows and slipping out from under doors. Ye Mimi’s poetry film Was Being Moved? – the only piece not commissioned for the online exhibition – depicts pilgrimages, parades, and postcards. Tan Lin’s poem “Mastering the Art of French Cooking and Systems Theory” uses code to pit two difficult-to-master books – Julia Child’s celebrated cooking tome and Niklas Luhmann’s systems theory – against one another. The two texts race at variable speeds, producing what Lin compares to a “screensaver on amphetamines.” Lin says: “The piece is about ambient speed reading that’s been hacked. I think you can make anything into poetry if you alter its timing. I like a novel with a stopwatch in it; but even more, I like a novel that is a stopwatch.”

Penny Goring says that these days, she uses “twitter as my notebook, facebook as my scrapbook, tumblr as my studio walls, and the internet as my archive, my source, my raw text, my toy.” Her mesmerising DELETIA- self portrait with no self is a seventy-plus-page epic (“cuz fuk internet attention spans,” she pronounces) made with multimedia publishing platform NewHive. Goring explains, “Deletia is about loss – it’s a grief circus. Too many close friends and almost all of my lovers have died young because of drugs, suicide, cancer.” To represent this ‘death snowball,’ Goring needed DELETIA to be sprawling and unconstrained. The piece, which has a twisted Tumblr aesthetic, inserts the artist’s face in a variety of images and features an original font, ‘Hell Lobster,’ which mixes Helvetica and lobster.

Batter up: giving us a hint of what’s to come with her forthcoming contribution the project (live on March 30), Melissa Broder of Twitter poetry fame describes her new poem as “audio ekphrasis.” The piece emerged from a series of sleepless nights during which she continuously listened to Oneohtrix Point Never’s R Plus Seven album. NewHive’s embeddable frames allowed song and language – both integral to her piece – to co-exist.

Attention to the material structure of a poem doesn’t detract from the linguistic or emotional force of the poem; in Poetry as Practice, this awareness actually enriches the poetic experience. In the words of curator Harry Burke: “I’m into poets who just write poetry, too! I’m into the intersection of heartbreak, line break, and break the internet.”

Poetry as Practice runs through April 6, with new works published each Monday. For more, click here

Your guide to a safe acid trip
Arts+CultureLightboxpoetry