From the streets of Ohio to the Whitney, the conceptual artist shines a light on her creative origins

Taken from the March 2010 issue of Dazed:

“I was born in Ohio at Holzer Hospital, oddly enough. My father was an athlete and an unsuccessful car dealer, my mother a horserider. I drew madly and happily until I was five or six years old, but in my teenage years I tried to become normal. It was only when I was in my 20s, I realised ‘being normal’ was out of reach (and that maybe I was okay with that), so I went back to art. I first studied the standard liberal arts, including Biology, English and Sociology, and changed schools every year or so. I spent time at two high schools, Duke University, the University of Chicago, Ohio University and eventually the Rhode Island School of Design, which was officially ‘arty’.

Before RISD I thought I should become a lawyer. The idea of being an artist worried me for a long time. A lot of my family helped people for a living. One set of grandparents included a doctor and a nurse, and the other set a capitalist and a schoolteacher. I was uncertain that art’s wonderful lack of utility could ‘do good’ in the same way. I enjoyed Rhode Island, but I was nearly kicked out for painting my studio – windows, walls, ceiling, door and floor – in a washy blue. This blue was hardly radical but it was too odd for what was then a relatively conservative painting department. I was accepted into the Whitney Museum Independent Study Program and that saved me, and through that I was able to graduate. Although Rhode Island was difficult occasionally, it was useful and pleasant to have ‘fellow travellers’, other art students, around me. And I had good experiences with professors outside the painting department. These men were sincere and dedicated; they couldn’t imagine themselves as anything but artists. 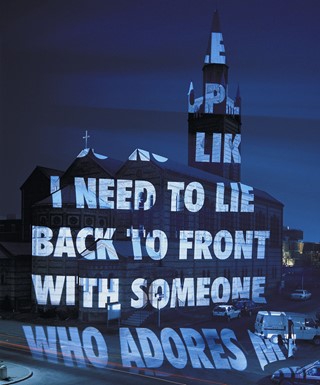 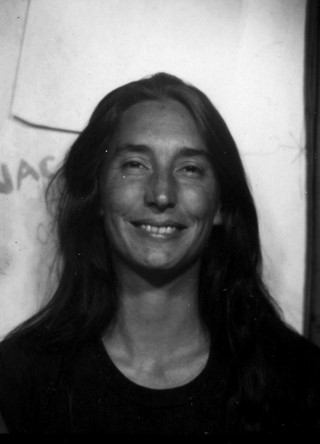 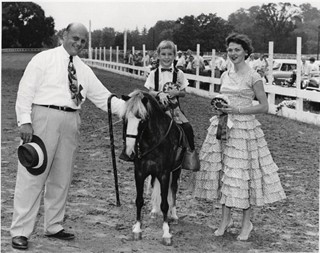 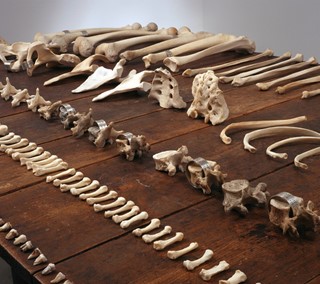 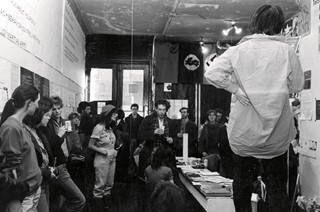 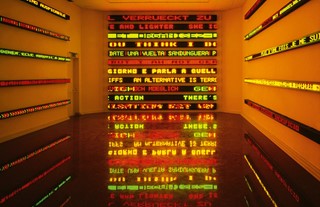 It was at RISD and then at the Whitney where my conceptual work developed. I would go to the library to search and find physics, psychology, economics, and many other sorts of diagrams. I was curious about the relationship between image and text, and diagrams seemed a rather essential representation of information. I appreciated the way the captions gave you what you needed in very few words. This research led me to write on my mediocre abstract paintings, but that proved to be an unhappy combination. There was colour and atmosphere in these paintings, not satisfactory colour or atmosphere, but the start of what I try to have in my installations now. And the diagrams encouraged me to search hard for concrete content, an ongoing occupation.

At the Whitney, I began looking at ideology and wanted to approach belief systems from many different angles. I went to the left-wing, to centrists, and to the right-wing. I read politicians, critics, crackpots, dictators and visionaries, and I began to compose short pronouncements distilled from what I had read. These sentences became the Truisms, the oneliners that started my art life. Once I had the Truisms, I had to decide where to display them. They didn’t belong in a book, and they weren’t poetry; so I came up with the idea of displaying them on street posters. I wanted to give short versions of the big versions to people in an accessible form.

At that time, I had no interest in showing in a gallery space. I still wasn’t sure I was an artist, or that I could be or deserved to be – I thought of my practice more like standing on a soapbox, but without actually being there. The anonymity was critical. I wanted people to consider the ideas but not give more than passing thought to who produced them. Sometime during that period, my work became noticed, through the kindness of Dan Graham who saw my posters and mentioned them to the curator Kasper König, and I began to have an official art career.

I would describe it as a slow incline with various dips rather than a steep trajectory, but I was relatively young when I did a show at DIA, then the Guggenheim, and represented the United States at the Venice Biennale. During that time, I also had a baby. Those three shows all took place within a few years, and that was an insane time. I worked on DIA when I was pregnant, had a young child for the Guggenheim, and my daughter celebrated her second birthday at the Venice Biennale. I don’t recommend that. I see why guys don’t do it. Although it was a great period for learning-realising, art is hard (and it should be). The rest of my life was desperately difficult at moments.

It’s tough on relationships when you’re obsessed by art, and to be honest, I think it’s harder for women than for men. Successful male artists appear to attract adoring people while successful female artists tend to make partners and acquaintances angry, and babies (properly) confused. What is considered a good thing in a man is potentially troublesome in a woman but I was determined not to crumble, tempting as it was. It’s almost impossible to balance one’s personal relationships and mothering with the art imperative. I still apologise to my daughter with some regularity.

I have to admit that the move from the street into museums was not the most comfortable one. Anonymity was taken away, but it was an honour to be invited inside. At the very beginning, I thought I was better off on the street, unseen, but it became clear soon enough that I wasn’t fast becoming anything other than an artist, so I finally gave over and allowed myself to make work. Over the years, my work has changed. Going from the street to the museum partly came from the need and desire to be a better artist. In the best of worlds, the work would be seen, and I would remain a shadowy figure. This mindset still affects the sort of work I tend to make: pieces that are glimpsed, that exist for a moment and then in memory.”

Jenny's work is currently being featured in Adventures of the Black Square at the Whitechapel Gallery. The exhibiton runs until the April 6 2015