In an era marked by racial discrimination and ominous Rising Sun flags, these two non-violent vigilante-style groups are pushing back against the oppressors

Their infamous genocidal phrases yelled on the streets of Tokyo include “Kill, kill, kill Koreans” and “Good Koreans, bad Koreans, still kill them all”. Black vans bearing national flags drive through Korean communities, bellowing the aggressive slogans from on-board speakers. Patriotic music fills the air as they hurl verbal abuse at students in Korean-affiliated schools. Finally, they come to a stop outside liberal media and government buildings, calling for an end to the Koreans’ residency in Japan.

On August 29, 1910, Japan officially took control of the Korean peninsula, marking the beginning of a 35-year occupation that would end in 1945 and force hundreds of thousands of Koreans to migrate to Japan. This minority was eventually labelled the ‘Zainichi’, which literally translates as ‘staying in Japan’, and thus began an era of racism and discrimination. Today, the grandchildren of Korean migrants suffer for their descendants’ expatriation. The Korean minority primarily faces a single opponent – a group formed in 2007 called the ‘Zaitokukai’, translated into English as ‘Citizens against the Special Privileges of the Zainichi’. In a story known around the world, they falsely claim that the minority group is granted special privileges as part of their integration into Japanese society. The government frequently permits public displays of oppression from the Zaitokukai, who pass through residential streets waving Rising Sun flags (symbolic of Japan’s former empire), encouraging the murder of Koreans. 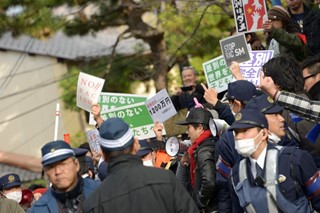 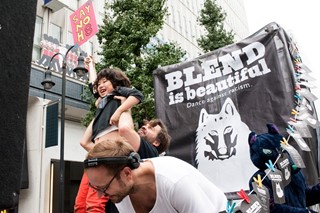 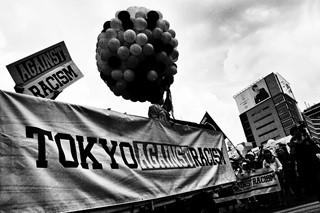 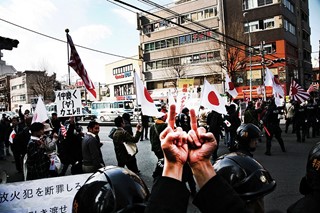 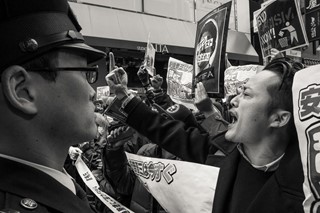 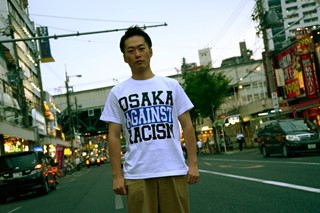 This is where Counter-Racist Action Collective (CRAC) and Otokogumi (The Menfolk) come in; two groups wholeheartedly opposed to racism on all levels, but focused on anti-Zainichi movements. They utilise aggressive tactics, believing that a hard-hitting approach is the best approach. Almost all Zaitokukai rallies are met with noise and numbers from both groups in an attempt to counter the protest. Members scream for justice and a stop to this extreme oppression of Koreans. Police lines are formed between the protestors, but occasionally one will break through. Up close and personal, the Zaitokukai feel the full force of the anti-racists’ intensity.

CRAC and Otokogumi aren’t merely interested in street protests, though: they are “a platform for speech, photography, art, music, petitions, lobbying, events and workshops” that aim to confront the racism present in Japan today. But this is no easy task, as they are forced to fight on three fronts: against the racists, against the police and against the government. Group members are frequently arrested by police during demonstrations, despite operating under a total non-violence policy. When they are not being detained by the authorities, they are subject to government-approved house searches in order to ascertain their motives and movements.

We spoke to two anonymous representatives of the groups changing the shape of protest in Japan:

Is racism widespread in Japan, or do you feel it is dying out?

CRAC: Racism levels in Japan are the highest they’ve been since WWII. The situation has never been this bad before.

Are the Zainichi the main target for racism in Japan?

CRAC: Yes, the targets have been mostly Zainichi, who are old-comers and residential foreigners in Japan. But newly arrived Koreans are targeted as well. The Chinese minority have also been subject to abuse in the past.

Who are the main groups that promote racism in Japan?

Otokogumi: The most infamous group is the Zaitokukai, ‘Citizens against the Special Privileges of the Zainichi’. And there are some racist groups working under the Zaitokukai too.

“Racism levels in Japan are the highest they've been since WWII. The situation has never been this bad before” – CRAC

Do the Zaitokukai use violence against the Zainichi?

CRAC:  They mainly use verbal abuse or hate-speech, but have been known to use violence on occasion. The Zainichi used to suffer from more physical attacks – the massacre after the Great Kanto earthquake in 1923 being the worst – but now that has been replaced by aggressive propaganda that incites violence instead.

Do you condone violence against the racist organisations?

If you do not condone violence, how do you confront them?

CRAC: We organise counter-protests against their demos and campaigns. As for the counter-protests, which you often find in the UK or other western countries, there have not been things like that in Japan before. This style of protest, citizens-v-citizens, is very new.

To what extent is racism existent in Japan’s younger generations?

Otokogumi: There are many youngsters who have been infected with racism, and there have been various discussions about the cause – such as young people who feel alienated from society, and low-literacy internet users who accept groundless stories on the internet without questioning their credibility.

CRAC: There’s definitely racism present in Japan’s youth, but it seems that it’s mainly been going around in middle-aged Japanese. Japan was economically strong when they were teenagers, but not now. They probably lost self-confidence or pride as their own country declined. They blame liberalism and, by extension, multiculturalism for this. It’s the perfect scapegoat as the minorities are not well represented in Japan.

Do the police support your protests against the racist organisations?

CRAC: Not at all. We have been subject to unjust arrests and unwarranted house searches.We are treated as if we are the threat, when it’s the complete opposite.

What is their intention when they conduct house searches?

CRAC: They take our phones to investigate the relationships between our group’s members because we are very new to them. They do not trust us. Most of us did not come from leftist groups that existed prior to CRAC, so the government are suspicious of who we are. Especially as many of us are opposed to the fascist government currently in place, and regularly protest against it.

Are the government involved with the Zaitokukai?

CRAC: Yes. You may have seen in western papers, such as the Guardian, pictures of the Japanese prime minister, Shinzō Abe, posing with an ex-Zaitokukai executive. There is a longstanding relationship between members of the Abe cabinet and the Zaitokukai, particularly in the last 15 years.

Many cabinet members are influenced by what we call the Netouyo. ‘Neto’ means ‘internet’ and ‘uyo’ is short for ‘uyoku’ which means ‘right wing’. These online extremists generate much of the anti-Korean and anti-Chinese ideologies present in Japan today. They also propagate rumours concerning Japan’s wartime involvement in the comfort women trade, insisting that Japan was not responsible, and that the women were voluntary commercial prostitutes.

What are your next steps in the situation?

CRAC: To seek regulation by law. The first anti-hate speech bill was to be submitted to the Diet (Japanese parliament) in November, but if Prime Minister Abe goes ahead with his plan to dissolve the Diet then the bill will be cancelled. We need to stop this.

We have also recently launched educational programmes in high schools to target the youth of Japan. They are the future, and if we can set them on the right path and make sure they are correctly informed, the job will be made much easier.

A problem occurs here, however: because we are a new phenomenon in Japan, we are still treated with suspicion, and that suspicion doesn’t end when you reach the education system. Even teachers are wary of inviting us to lecture at their schools. It is important that we show the country we are not here to cause trouble, we are here to stop it.