The Glaswegian artist, whose to-do list includes ‘pissing’ and a ‘human heart’, reveals why he’s not bothered playing the tough guy 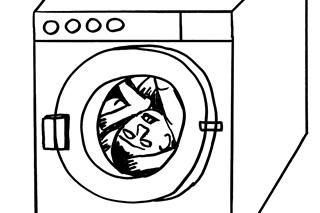 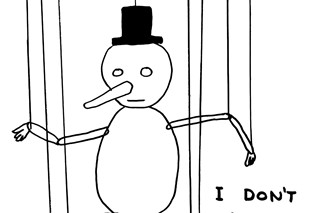 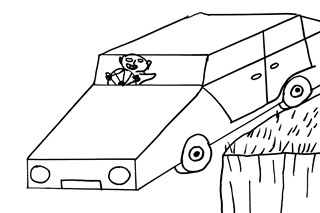 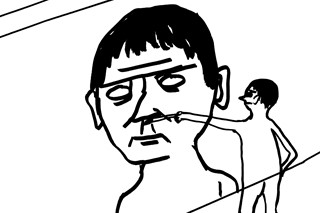 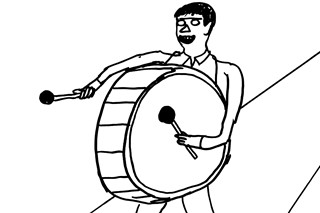 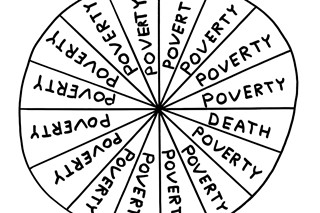 David Shrigley arrived in Glasgow in 1988, “thrilled with the idea of studying art for three or four years”. 26 years later and Shrigley is now a celebrated artist around the world, and still living in Glasgow.

Famed for his child-like drawings underpinned by a twisted but hilarious worldview, the honorary Scot has also made animations for Pringle, a pop video for Blur, spoken-word albums, sculptures of a stuffed terrier holding an “I’m Dead” placard and a 10-metre high thumb, which will be unveiled on Trafalgar Square’s plinth in 2016. Earlier this year, the prolific Turner Prize-nominated artist even found time to redesign London’s Sketch restaurant, right down to the cups and saucers.

Next month sees the publication of Weak Messages Create Bad Situations (“a crazy coffee table book all in black-and-white”) and the opening of a major exhibition in Australia (“it’s a bit of a monster and I haven’t finished yet!”). In honour of the second in a series of celebrations for the re-launch of Pringle’s much-loved and longstanding Bulletin Magazine, Shrigley finds a quiet corner in his studio to ponder being Glaswegian, not meaning what you say and Ben Stiller movies…

What was your first impression of Glasgow?

David Shrigley: I couldn’t understand anything that anybody said for the first six months! (Laughs) My interview at the Art School was the first time I had ever been to Scotland. It seemed really exciting and exotic… all that faded Victorian grandeur, and the Art School building itself is pretty spectacular. I grew up in Leicester, which is not an architecturally significant place so the architecture of Glasgow had a big influence on me. Also, going to Glasgow Art School was the first time that I’d ever left home so I just stayed up really late because I could – because my mum wasn’t there! – and got up really late. The first winter I was there, I don’t think I ever saw daylight.

Have you adopted any Scottish traits?

David Shrigley: Well, I moved to Scotland when I was 19 and I’m 46 now. I’ve lived in Scotland longer than I’ve lived in England to the extent whereby England seems a different place to me now. The place where I grew up in Leicester doesn’t really ring any emotional bells for me anymore when I go back there. I sort of remember things but my memories are memories of being in Glasgow. So, I must be a Glaswegian now I suppose… and I must have that Glaswegian sensibility.

What is that sensibility?

David Shrigley: I think there’s certain darkness to the west of Scotland’s sense of humour. But I’m an artist and I live in the fancy part of town: the West End of Glasgow is quite a bohemian, affluent place relative to the rest of Glasgow so whilst I’m Glaswegian I’m very much a Westender. You know, I go and watch Patrick Thistle on a Saturday – the football team in the West End – whereas if you come from the East End you might go and see Celtic, which is an entirely different proposition (Laughs). I never really aspired towards working class authenticity. I’ve always aspired to abandon my modest roots and try to become a bohemian… I’m not trying to kid anyone I’m a tough guy. I’m quite happy being a ponce! 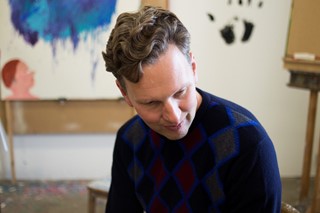 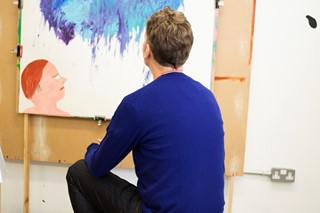 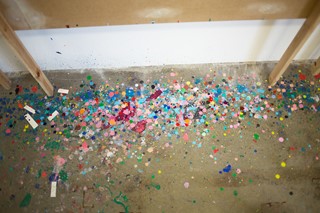 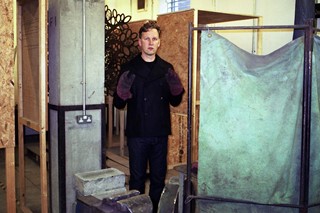 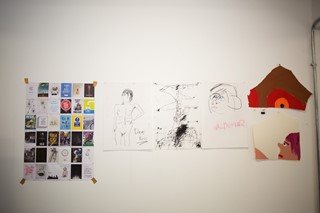 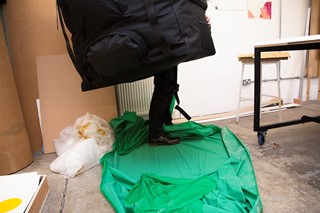 How important was drawing to you as a child?

David Shrigley: I’ve always been able to amuse myself very easily. I was one of those children who didn’t need a lot of entertaining. A blank sheet of paper and some pencils was quite enough. I’ve always liked drawing and making things… it’s always been a fun activity for me and it’s my default setting.

David Shrigley: I think when there’s somebody who is going to come and take the drawings away on Monday and you still have 20 drawings to do that does tend to hinder the enjoyment of it – and that’s the situation I’m in right now! But, in essence, the moment when I’m working is still the moment when I feel most free in the eye of the storm that is around me. I feel very at peace when I’m working, it’s a very meditative and cathartic thing for me.

Can you draw anywhere?

David Shrigley: It’s a very adaptable activity. When I’m travelling I have a small sheet of paper on me and if I’m in business class then I can draw… and if I’m not in business class then I just watch Ben Stiller movies like everyone else! (Laughs) But, yeah, I’m able to work in different places and that’s the beauty of making drawings as opposed to sculptural work: you can go elsewhere. Right now, I have a big studio space and I’ve got some big paper – 150cm high – and I’m painting pictures on the paper because I’m allowed to make a mess.

What are these big pieces for?

David Shrigley: They're for an exhibition in Melbourne at the National Gallery of Victoria, which opens in the middle of November. They made all the frames in advance so I could have the longest possible time to make the work. The boxes are made, the frames are made… the only thing which still isn’t made is the actual works themselves!

How do you start a new piece of work?

David Shrigley: I tend to write lists of things that I’d quite like to make but I’ve no idea how they’ll resolve themselves. They’re usually a list of very banal things: for example, two things on my list today are the words “pissing” and “human heart”. I will interpret those two instructions as I see fit. Something will happen eventually but a lot of it gets discarded so I try not to put any pressure on one particular image. If you’re making something and you know that there’s a high probability that it’ll get thrown away, it gives you the ability to make something that isn’t contrived. Well, that’s the strategy.

“I tend to write lists of things that I’d quite like to make but I’ve no idea how they’ll resolve themselves. They’re usually a list of very banal things: for example, two things on my list today are the words ‘pissing’ and ‘human heart’ – David Shrigley

Is the voice in your work yours or an invented character?

David Shrigley: I think it must be an invented character because most of the things I say I don’t really mean. I just say stuff for the fun of saying it. I’m not trying to say anything specific. In fact, a lot of the time I’m saying the antithesis of what I actually mean. They’re not in any way autobiographical and do not in any way reflect my feelings about the world… But, then again, I suppose they must because I’ve made them (Laughs).

How do you want people to react to your work?

David Shrigley: I don’t really think too much about that – I don’t think it’s helpful. I think you have to like the work yourself before you can ever expect anybody else to like it. And my work which I like tends to be works that I’m not really sure about: they’re engaging, interesting and seem sort of profound but I’m not entirely sure what they mean. I suppose I’m interested in a slippage of meaning where words don’t quite describe images, and images don’t quite illustrate words.

Do you ever suffer from creative block?

David Shrigley: I have more successful days and less successful days but I don’t allow myself to have creative blocks because I don’t stop creating. Sometimes I make things that aren’t very good but my rules dictate that I make it anyway and just having that attitude seems to work. I still make the work even if I don’t want to. Somehow eventually something happens.

How would you describe your work in three words…

David Shrigley: It is what it is… Sorry, is that four or five words? (Laughs) There’s nothing more complicated than is immediately apparent. It is what it is: that doesn’t mean it’s necessarily good but it just means you don’t necessarily need to know anything about art theory to understand it.