As part of our new summer US project States of Independence we've invited our favourite 30 American curators, magazines, creatives and institutions to takeover Dazed for a day. This week, State of Sex takes an all-encompassing look at sexuality, gender and all the flavours of the American rainbow.

Depending on who you ask, Chez Deep is avant-drag, post-drag, or simply "drag beyond 2000". Either way, the art collective has one of the most radical visions of art and gender in America right now. Check out all things sisterhood in their Dazed guest edit – here, they big up NYC drag night BathSalts.

Your guide to a safe acid trip
BathSalts: A Drag Show For Fuck-Ups5 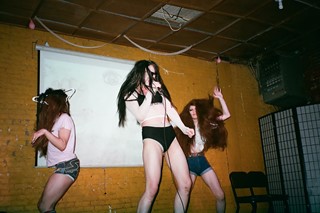 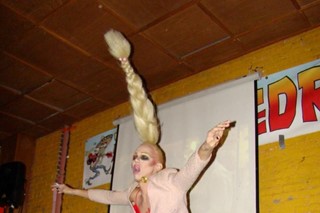 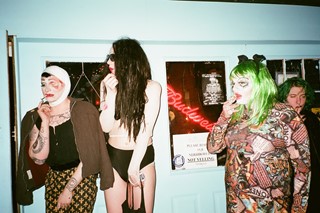 In 2012, I was stricken with anxiety surrounding apocalyptic themes of human annihilation predicated on planetary destruction, the Mayan calendar, and viral YouTube videos. I dreamt of aliens returning to guide me back to an ancient maternal planet and vividly daydreamed the sky folding back to reveal an ominous black hole, or an exploding sun. While visiting Chicago, it was reported a zombie man had eaten off the face of another man, overcome with superhuman strength and rage. In the next few days, other stories trickled into the newspaper with gruesome reports relating to the possibility of a zombie outbreak, initiated from the consumption of bath salts.

In the immediacy and public terror of this event, an invitation to a party called BathSalts appeared in my notifications. My unreasonable anxiety was called into question by whomever had brilliantly arrived at an opposite position: a party to celebrate and clown the hysterics of media terror. In the words of Macy Rodman: "We thought it was funny because it was such a weird, sensationalist tabloid story and it made no sense to name a drag show after it, so we gave it the subtitle "A Drag Show For Fuckups".

After the first six months, Rodman was joined by her co-host Severely Mame, along with a gaggle of queers, making BathSalts, a weekly drag show on Monday nights at Don Pedro’s. The drag environment and behaviour of performers on a regular BathSalts night could resemble the absurd and frenetic delirium of a person who has smoked a Lavender Aloe Bath Salt.

The belligerence and grit of BathSalts demonstrates my favourite kind of escape portal from a New York world predicated on winning and successes. On his discussion of queer futurity, José Esteban Muñoz's Cruising Utopia proposes that "[e]scape need not be a surrender, but instead, may be more like a refusal of a dominant order and its systematic violence." Where systemic forms of media terror once pacified me into panic attacks, BathSalts resisted this psychological warfare by creating a space to clown and celebrate nonsense and absurdity with a form of "drag" not based in subverting ideas of gender, but rather the content of our newsfeeds.

Under the dilapidated ceiling of Don Pedro is a stage that houses hysterical and unpretentious talent. The stage is a carpeted three-foot platform, with idle room for a seven-foot drag queen to wobble and thrash in heels. Evenings begin with Salty Talk, a live talk-show in which Mame and Macy discuss current events. After the first wave of performances, the hosts lead audience-participatory contests for drink tickets. Depending on the week's theme, contests range from seductive dancing to trivia to confessional storytelling.

Immense talent shines through Macy, Mame and their family of queer debutantes and fetish boys. Mame has a sharp, electric wit. Her unscripted happenings onstage perpetually yield the audience’s attention. When Macy performs her pop single "Clanging" (a speech term psychiatry has coined for a sort of alliteration word-soup related to mental illness), she gyrates and contorts, her semi-dreadlocked wig coming alive. The entire room lights up.

After spending her first 18 years living in Juneau, Alaska, Macy moved to Brooklyn and found performance as a primary method to meet people. "It's hard for me to connect with people sometimes and I can get very trapped in my own head, but performing was a way to show people what my deal was, and led me to meeting people who felt the same way. I think you just really have to put yourself out on a limb and see who else is on that limb that you can chill with."

Mame, who grew up in rural Palmer, Massachusetts, moved to New York with a motive to find directives for her creativity. "I kind of thrust myself into the Brooklyn nightlife realm, which was the first time I felt the freedom to do whatever I wanted. It was amazing to have a community to support me and my ideas no matter how trivial they would initially seem."

The semiotics of drag have undergone drastic rifts in the past five years, and the highly mediated digital space for discussing and demonstrating playful or comical relationships to a gender politic have largely been ousted by contentious flame wars. Inside the rising white noise of Facebook threads and blind internet bullying, BathSalts has strangely occupied a space of policy resistance with a diverse family of gender non-conforming performers and attendees.

“People appreciate that, at BathSalts, you don't have to worry if you're gonna get hit on, or not get hit on, or deal with bros or jerks. It's just hang time” – Macy Rodman

In the words of Rodman: "The biggest social and cultural change has been a rise of brutal political correctness that informs the zeitgeist right now, and it's something that has both helped and hurt us at different points. We want to make a show that is relevant to the world we live in, and work through uncomfortable issues with gestures that are both honest and funny. From an outside perspective, some perceive us as insensitive, bratty provocateurs, but when you're actually at BathSalts on a Monday night, it doesn't feel provocative. It feels like a living room where you and your friends are getting drunk.”

“People appreciate that, at BathSalts, you don't have to worry if you're gonna get hit on, or not get hit on, or deal with bros or jerks. It's just hang time,” Rodman continues. “Our regulars are all from such different backgrounds and political/sexual/social/gender identity orientations, but everybody mixes and plays with each other. And in a way, the resistance we've gotten from people on the internet has taught us how external communities perceive what we're trying to promote.  At the end of the day, we don't want anyone to feel unwelcome, and I think it just takes time to finesse our message into something that's more widely understood."

Macy Rodman and Severely Mame continue a reality that has reverence for social policy but evades homogeneous politics. Within the grimy sanctuary of Don Pedro, these queens remind us that what is essential to a subcultural legacy of transgression is comedy and a willingness to disarm certainty in identity politics. It is with hope that spaces like these continue to reduce identity polemics towards new forms of pragmaticism.

If you live in New York and are smart enough to check out these gals, BathSalts continues Monday nights at Don Pedro in Brooklyn. Shows usually begin at midnight. Severely Mame’s sister-party Scream Queens will soon be transforming into a web series and Macy Rodman’s pop music recently visited LA for Outfest and is currently planning for a music release and eventually a US tour.