As part of our new summer US project States of Independence we've invited our favourite 30 American curators, magazines, creatives and institutions to takeover Dazed for a day.

Today, it's the turn of Tumblr, the platform that has turned self-publishing into an art form. Fortheir exclusive guest-edit, we’ll be exploring the Tumblr aesthetic in its many forms – from the dA-Zed of Tumblr art, to pop quizzes with our favourite Tumblr publishers and spotlights on some of the best net artists blending IRL and URL(s) in radical new ways.

Michael Manning is the prolific digital art pioneer coming to a gallery, Tumblr blog or – if you're in the vicinity of Southern Cali – Microsoft retail store near you. Manning – find him online under his chosen alias, mirrrroring (4 Rs) – absolutely smashed the recent Phillips Paddles On! digital art auction in London with his piece Chinese Broccolini Torta: a canvas combining digital print with acrylic paint in his idiosyncratic style. Whether he's invading computer stores and making art on their displays (turns out, none of the staff took much notice), or working on hundreds of variations of the same animation on various corners of the web, Manning has turned the humble jpeg into a radical artform. But how does a prolific net artist really work, on a day-to-day basis? We spoke to him about his typical schedule, upcoming projects and why bad 3D kids movies are his biggest IRL inspiration.

Five of the most explicit anime films ever
Michael Manning5 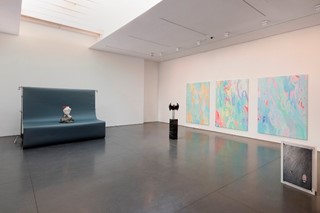 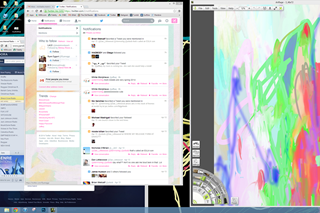 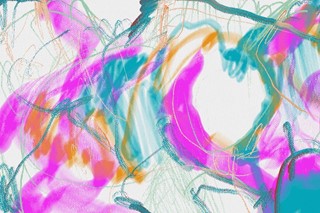 What was your first thought when you woke up this morning?

Michael Manning: Honestly? I'm making this piece for this show I have coming up in August in Stockholm [at Carl Kostyál]. It's like 8 foot by 50 foot high. Really massive! Its going to be a painting but at the same time I'm using lots of found images and its really hard to find images that are that large. A really silly thought to have first thing in the morning, I know, but I'm thinking about DPI at first thing in the morning.

And what does your average working day look like?

Michael Manning: It kind of depends on what projects I have going at the moment. Recently there's three or four hours in the morning before my studio gets too hot – there's no air con. So I will sit and paint, make a press release, or a random Jpeg or whatever. Then after lunch I might go to the beach and go swimming somewhere, because recently its been so hot that I can't stand it without going swimming at some point in the day. Mostly in the afternoon its too hot to work on the computer! I might finish canvases I'm working on. Or I'll just be lazy and watch Netflix for a while. I typically work 3 days over the week in the studio.

I know you were saying your studio is a shared space, in general what are your views on collaborating with other artists?

Michael Manning: I haven't recently, but I do love collaborating. When I started making work I was doing a lot of work online – it was based on Dump.Fm [the real-time image sharing website]. So I met tons of people online there, and just spent years making gifs, jpegs or whatever with people. I guess the last major digital collaboration was Jeff Baij and I did a piece that recreated new constellations and then mapped them into a sky. So you could scroll through and see mapped out constellations.

I guess with your social media presence its a kind of constant collaboration. Especially with self-publishing sites like Tumblr its all about collaboration and community.

Michael Manning: Yeah. When it comes to Phone Arts, at the end of the day it was about collaboration in terms of the finalised product – but I never collaborated on individualised pieces, if you see what I mean.

Thinking about working spaces – much of your work hasn't been produced in an traditional studio environment. Can you tell us more about your Microsoft Store Paintings? What was behind your decision to pursue alternative work spaces such as these, and what was your experience of working so much in public?

Michael Manning: So I guess working in the Microsoft stores started inadvertantly at first and then it became a really conscious decision. Previously I had been creating on my phone and my friend's iPads and stuff. I was addicted to painting in touch screen. So when they came out with the large touch screen desktops I was like, okay, I have to do this, this is amazing! So I would go and I would test out the computers and I realised it was way more interesting to be making them in a public space than it would be to take one home and spend hours labouring over a jpeg. I had heard and seen a lot of kids who would go to the Apple store off Central Park, or any of those stores, and make their YouTube videos in the Apple Store. The idea was to take what's meant to be a commercial space and subvert it so that it turns into a quasi-private studio for me. I would be doing it alone and meditating on what I was producing and looking back on it, but there's this nice element of being in a store and feeling like I'm not supposed to be there and working as fast as I can. The thing is that the people who worked in the stores were so lazy they didn't care that I was there for so long!

That's insane! Did you always go to the same store?

Michael Manning: There were two within driving distance. One of the sales dudes started to get to know me pretty well, like, "Oh, you're back!"

Really thinking hard over that decision to buy a MS tablet...

Michael Manning: That's the funny thing – no-one tried to sell me a computer! In all the time that I was there! I spent hours there. Not once did a sales associate come and bug me.

I feel like that might have been more difficult in the Apple store. Those guys are crazy attentive.

Tell us about where you get your ideas from, online.

Michael Manning: I do a lot of surfing on Dump. I'll be on there playing around with stuff that people have gotten from all over the internet. I also really like this website Turbo Squid, which is like a 3D warehouse. You can go on and buy already-made, hyper-realistic 3D models. A lot of the time when I'm doing work with found imagery I like to find a lot of the stuff on there because they have this real-but-fake look to them. There's Pic Search which is good. You used to be able to search for animated GIFs, so that was a big deal before Google implemented it. I also spend a lot of time on Twitter, I'll get a lot of ideas from what people are tweeting about and then I'll go into a deep surf. Sometimes people are tweeting about something and I'll be like, that would be really cool to realise as an image.

“Given a strict set of limitations, I like to work within those to produce something as different from what I'm allowed to be creating as possible” – Michael Manning

What influences you outside of your internet browsing? IRL?

Michael Manning: Surf culture, skateboarding culture. I grew up in Southern California, and I still live here! Those are probably the biggest. Outside of that, I'm really into bad 3D kids movies lately. Like How to Train Your Dragon. I rewatched the first one, I'm really into that! I thought it was going to be terrible and it was awesome. Its crazy. And then like my day job, or whatever, I work for my family in construction. So being around construction dudes has had a really big influence on the way I think about making work.

With your work, for example when you use MS Paint, or in the Phone Arts series, how do you see the limitations of those devices or softwares? Are you working in spite of or through those limitations?

Michael Manning: Part of my personal practice has always been interested in working within limitations. Given a strict set of limitations, I like to work within those to produce something as different from what I'm allowed to be creating as possible. The same could be said for people who are making 8-bit music – its kind of the same idea. I'm also interested in co-opting the aesthetics of softwares and rebranding them as my own aesthetic. I have had a lot of people tell me that a lot of people are doing digital painting, and that a lot of people are doing things that are similar, but that mine all have a similar aesthetic – from the phone tablets, to the big paintings. That unified aesthetic is partly because I steal my aesthetic from software and try to make them my own, and also because within the software I'm doing little tricks that I know and have learned over the course of using it.

I was thinking of David Hockney's high-profile iPad paintings – they couldn't be coming from two more different places. Those are Hockney paintings that just happen to made on an Ipad, whilst yours work through the software and almost in the "back-end" of those softwares.

What projects do you have coming up? This physically huge thing?

Michael Manning: I have a show at Carl Kostyál in Stockholm. So Petra [Cortright] did a show there, and Alex da Corte did a show that just closed. Mine will open at the end of August. There's going to be a large fabric piece, a couple of paintings, and a lot of videos. Probably some installation stuff that I'm going to do. I'm really excited.