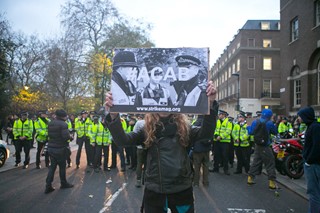 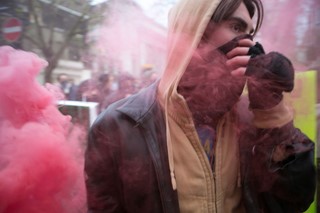 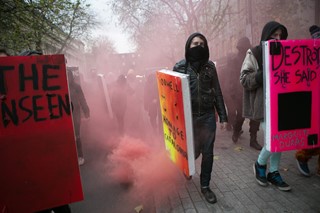 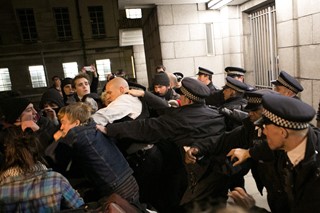 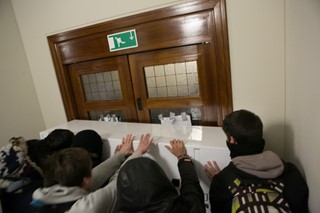 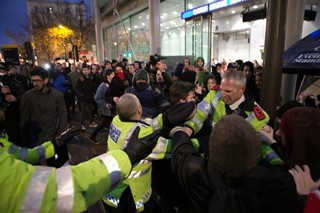 Last week, London’s village-like Bloomsbury area became a battleground between students and police. In two days, 43 arrests were made, and several videos appearing to show police brutality are now circling the internet. It was the latest, most violent episode in a crackdown on student protest in the city which began in the summer. Amid the chaos of last week, the University of London – the capital's biggest, which includes Goldsmiths, SOAS and UCL – got itself a High Court injunction forbidding protest on its site until next June. Those who disobey it, the order warns, might find themselves in contempt of court.

“The university started filming demonstrations from the balconies of Senate House, with few missing the irony that the building inspired the Ministry of Truth in George Orwell’s Nineteen Eighty-Four"

It goes back to Wednesday evening when University of London security forcefully evicted 30 demonstrators staging an occupation of its premises at Senate House. Some 50 police were on hand, but only, the university said, “to prevent a breach of the peace”. However, footage appears to show them doing a lot more than that. One officer can be seen punching a man in the face. In another clip, two police slam a woman, screaming, to the pavement and then walk off.

There were seven arrests that night but, the police were keen to point out, no formal complaints were made against them. Still, both people at the demonstration and those who had seen it reported online were furious, appalled by what they considered police violence and intimidation.

That anger could be felt at a Cops Off Campus protest, promoted anonymously on Tumblr, which took place the next day. Some protesters brought homemade shields (not a bad idea, since the police definitely made use of their batons), while others let off red smoke bombs amid clashes between officers and students.

This time, 36 people were arrested, including a man with a crutch. An eyewitness said he “was walking near the police when they pushed him, and as he fell backwards the police kicked away his crutch before jumping on him”. After officers moved away from where his arrest took place, a red blood stain could be seen on the pavement.

Students being beaten on the streets of london. Cover it! #copsoffcampus@guardian@BBCNews@Independent@c4newspic.twitter.com/t3qrFCR4Rd

Oscar Webb, the editor at the London Student newspaper, was one of those arrested. He was there covering the protest and can be seen in a video holding up his press card just before being handcuffed. He spent the night in isolation in a cell in south London, and although he wasn’t charged with any offence, he now has bail conditions that prohibit him from going in Senate House. If police were already clamping down on student protests, they now appear to be getting heavy-handed with those who report them too.

As far as the students were concerned, these were two especially brutal days. But the crackdown goes back months, when in July a 24-year-old philosophy student was arrested for writing in chalk on a University of London foundation stone. It’s alleged she caused £600 of criminal damage, even though, as one person was quick to point out: “Chalk can be washed off. That’s the whole point of chalk.”

Shortly after, the university effectively banned protest on parts of its site, saying it would “consider protesters to be trespassing” and “take all the necessary legal measures to prevent and prosecute” it. The ban has been defied by students. But when it was, police, some holding tasers, were there waiting at the scene. The university also started filming demonstrations from the balconies of Senate House, with few missing the irony that the building inspired the Ministry of Truth in George Orwell’s Nineteen Eighty-Four.

There were also the arrests of the vice-president and president of the University of London Union (ULU), who are seen by the university as masterminding the protests that cause them so much “disruption”. The former was in a student union bar that was raided and was detained after objecting to what he considered racial profiling by police. The latter, Michael Chessum, was arrested a day after a demonstration for, as he understands it, allegedly not letting police know about it.

“As demonstrators were being kettled on Thursday, one officer justified the police’s actions with the words: 'stupid students being idiots'"

So what’s motivating the police crack down? For Chessum, it’s simple: University of London management have been “colluding throughout with the police”. Although the university almost always denies calling police in, he sees it as directly culpable. He told me: “It’s clearly an attempt by managers to silence and intimidate those who disagree with the way they are running things, which is disgraceful given universities should be places of free expression which allow dissent.” On Twitter, he called on the university to condemn the violence over the two days. They said they wouldn’t –  it was “a police decision”.

As to why police appear so willing last week to get aggressive with the students, some have suggested it’s a way of pleasing their commanders, making their job more secure in a period of austerity. It may be that, or it may be something more simple. As demonstrators were being kettled on Thursday, one officer justified the police’s actions with the words: “stupid students being idiots”. Another said he “hated waiting around” and “enjoyed the disorder side of things”. In other words, it might just be that the police don’t like students very much and enjoy confrontation with them.

The list of ten demands issued by the those who occupied Senate House gives a pretty good idea of why the students are feeling the need to do so much protesting. They want to see outsourced staff and lecturers, who they consider the backbone of universities, given fair working terms and pay. They don’t want their halls of residence run by private companies who will charge extortionate rents. And they’re fed up of having the police, who unsurprisingly they don’t trust, allowed onto their campuses.

They’re also angry at the planned closure of ULU next year, which the university wants to take over. It’s a flawed body, but also considered an outlet for some of the grievances of London’s students. The National Union of Students, according to most of the activists, is useless. They see its leadership as careerists using their roles as a step on the way to a safe Labour seat, not an institution that can help them effect the change they want.

On Friday, a day after the mass arrests, a second Cops Off Campus demonstration took place. Again, there were hundreds of students and police. But it mostly just consisted of running around in the streets, getting in the way of motorists, with a police helicopter hovering above. A small group of anarchists, waving red and black flags, climbed a fire escape and were keen to find a way into University of London’s campus, which had been sealed off. But the demonstrators decided to call it a day and hold a sort of debrief meeting in the students’ union.

That wasn’t, I think, because their anger at the police had subsided. All around, you could hear protesters urging each other to “save it for next week” (this Wednesday, a national Cops Off Campus protest is planned). In other words, in Bloomsbury’s battle between students and police, things look likely to intensify further.