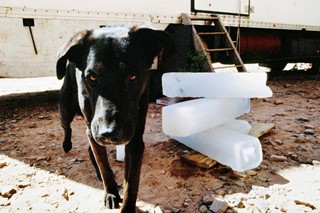 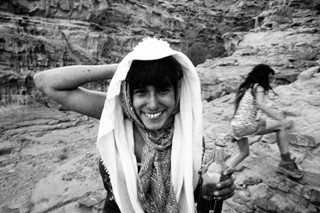 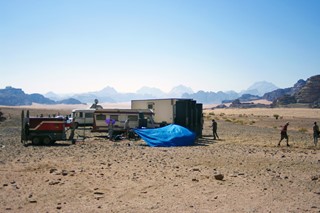 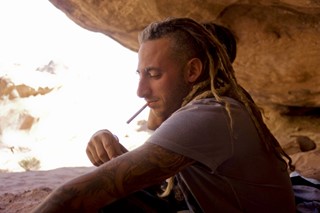 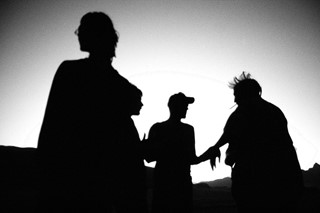 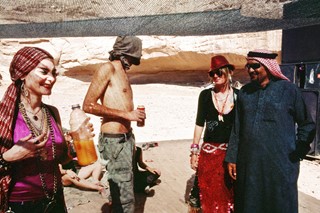 For me, this ground-breaking Middle Eastern experience began with a glance at a Facebook page in May 2008. Advertised: the ‘Middle East Tek’ (teknival) – a take-no-prisoners desert rave in Jordan.

That part of the world has always had an allure for me. I was born in Qatar and the happiest memories of my childhood are those spent camping in the desert every weekend, clambering over sand dunes, swimming in the Persian Gulf and eating barbequed angel fish that my dad had caught spear fishing. I moved to London in 1986, but as soon as I was old enough I revisited my birthplace and also traveled around Iran, Syria and Lebanon, where I met pioneering free party crew Kaotik System in Beirut, and photographed (highly illegal) rave parties in Tehran.

Inspired by experiences of the European rave scene, similar free-minded Israelis set up the first free party sound system, Street Freedom, and so began a small scene in their country. One of these instigators explained their idea behind the Jordan rave: “[It] evolved from the need for an international teknival in Israel, though we always knew in our hearts that it’s almost impossible because the [border] control will never allow ‘travellers’ and soundsystems to come across the border, let alone for an illegal gathering.” But they didn’t give up hope. In the summer of 2007, some of the Street Freedom members were travelling the teknival circuit in Eastern Europe and met a French rig, the Monkey-Family, a ruthlessly adventurous travelling crew who were game for a challenge.

A scout party went to Jordan on a reconnaissance mission and put the word out that they were looking for a place to hold a free music festival, eventually meeting the Bedouin tribe who control the nature reserve area of Wadi Rum. An agreement was made to hold the party in a year’s time, and logistics were hashed out for ferrying people into the desert in 4x4s and bringing food and water in, all for token fees. They weren’t the first to make this kind of deal; the same tribe had dealt with Hollywood types in the 60s when the area served as one of the film locations for Laurence of Arabia.

As for me, the impetus to go was the chance to photograph this first in free party history to add to my ongoing documentation of the subculture. I’d gotten directly involved with the squat party scene in my late teens; my first was in 1997 at a bingo hall in Wood Green, North London. I’d just started studying photography in secondary school and brought my trusty Pentax MX along the very next weekend, figuring my two new passions worked well together. I’d carried on taking photos, with the dream of one day publishing a big coffee table photo book.

Admittedly, I didn’t have the money to go on a desert adventure; I’d just overhauled my life and moved to a new city. But I had to take the financial risk, knowing that the experience would be priceless. I travelled from the UK alone and soon realised I was it, as far as GB representation. Although the Facebook group had several hundred members, one by one, the definites became maybes and eventually dropped out, due to lack of funds, personal injury, or just plain changing their minds.

Everyone I knew thought I was mad to be going out there alone. Instead, I concentrated my powers of persuasion on one last hope: my adventurous friend Jojo, whom I’d known for years through the scene in the UK. Jojo had emigrated to Bulgaria a while back and, luckily for me, a chance meeting happened there with the Monkey-Family and some of Street Freedom crew on their journey through Eastern Europe, and my friend was finally convinced.

Jojo and I were told to jump in the back of a pickup truck and were driven by one of the Bedouins for an hour into the deep, dark desert

But both the Monkeys and Street Freedom hit hurdle after hurdle. A mega fundraising party was planned with Israeli rave crews, with the hope of raising enough to take their sound to Jordan plus pay for any European rigs to travel the distance. That got severely busted and the crew had their equipment confiscated, but they borrowed money to keep the plan on track. They almost didn’t make it through the last border into Jordan until a declaration was signed by the Bedouin contact stating that he was personally responsible to ensure that the massive generator would leave the country in seven days, leaving his passport for security.

Desert extremities stripped everything back to basics including the crowd. The boldest and bravest made it. The French and Israeli soundsystems had a crew, albeit small ones, but all other countries, Holland, Germany, Austria, Italy, Belarus and more, were represented by only one or two people instead of the usual hundreds or even thousands at European teknivals. For better or worse all of us individuals made up a brand new crew and we had to spend time with each other, drinking coffee made Arabic-style on campfires, smoking shishas and sharing food.

At the designated meeting spot, people were turning up from their journeys through Eastern Europe, Turkey and Syria. Jojo and I were told to jump in the back of a pickup truck and were driven by one of the Bedouins for an hour into the deep, dark desert. It was late, only lit by the moon and a few vehicle headlights.

No-one was put off by the time, darkness or weariness and the crews got straight to setting up; to everyone’s delight the party started just in time for the dawn. We watched the sun rise over a surreal lunar-esque landscape; you could see why Wadi Rum was known as ‘The Valley of the Moon’. Jojo and I hugged each other and cried, as did the pioneering organizers, one of whom told me: “The first night was very emotional for a lot of people involved. Some of us even burst into tears. It was magical, a dream come true, nothing can stop us now. The only way is our way.”

There was a tense moment on Friday night when a convoy of military police in machine gun-mounted jeeps rolled up. I’ve witnessed monumental shows of police force and violence at teknivals in Czech Republic, but no-one had any experience with Jordanian police in an isolated desert. To the relief of all the organisers, the Bedouin chiefs took care of the situation completely. Out there in the isolated desert they have the final say.

It was baking hot during the day – freezing cold at night. Winds whipped records straight off the decks and blew them 50 m away; vinyls were warping in a split second from the heat. Nothing escaped the harsh effects of the desert sand including the equipment. But even if it took hours to fix and trips into town for parts and oil, it was done and the beat went on.

No-one had tents as we’d been assured of some kind of communal marquee or sleeping area – one of many luxuries that didn’t appear. As previously arranged, the Bedouins brought water, ice and food although the latter was not nearly enough to sustain everyone. One night in particular, a bucket of offal, bones and fur was delivered – we’d requested a whole lamb. But one thing not in short supply was booze: the nearby city of Aqaba was a tax haven and renowned for easily bought alcohol. Arak, a kind of pastis, was the teknival drink of choice, (especially refreshing when it was mixed with water).

With only one deck and speaker remaining, I closed with the Sex Pistols’ version of My Way

The rave ended up going for five days, with music playing 24/7 minus the three times that the generator (or its backup) broke: techno, a bit of DnB and jungle, breakbeat. I played three sets of crowd pleasers: pop, rock, ska, early hip-hop and 90s commercial dance, which served as a break from repetitive beats. By the final set, everyone was exhausted, starving and a gathering desert wind was picking up.

No-one could take another night and the generator had to reach the Jordan-Israel border by the agreed time. Powered only by coffee and strength of will, a skeleton crew of friends persevered till the end. The soundsystem was packed down piece by piece as I played; I’d saved the cheesiest tunes for last (like Phil Collins’ “You Can’t Hurry Love”).

Every time the music was cut off by something unplugged, a melodramatic sigh went up, the crew rushed to get the sound going again to a cheer. With only one deck and speaker remaining, I closed with the Sex Pistols’ version of “My Way”. It was dark when the generator was finally hooked onto the truck, and the convoy headed to a beach near Aqaba where we slept, refreshed by the perfectly warm Red Sea breeze.

It’s now exactly five years since the ‘M.E. Tek’. I still remain in contact with most of people I met, friendships strengthened further after reuniting at international teknivals, or by hosting visitors in the UK. One of the two curious British backpackers became completely converted to the scene.

The idea, undertaking, location, temperatures, conditions, and emotions all were extreme. I came away confident from facing an unknown challenge and cleansed by the desert, ready to face my new life in Bristol with revived determination to get my book done. Two and half years later I did: Out of Order: A Photographic Celebration of the Free Party Scene, covers ten years in 450 pages. It was impossible, however, to squeeze in the M.E. Tek. Parties from Jordan, Lebanon, Iran, Morocco and recent years in the UK are waiting patiently for when I endeavor to embark on the next book.

Out of Order: A Photographic Celebration of the Free Party Scene is out now. mollymacindoe.com/publications/stockists