Inspired by psychedelia and surrealism, the Japanese pop aritst comes to London for a solo expo 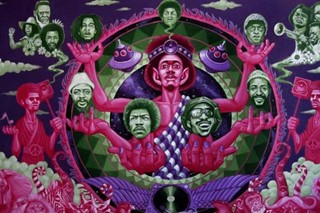 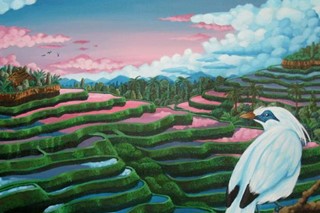 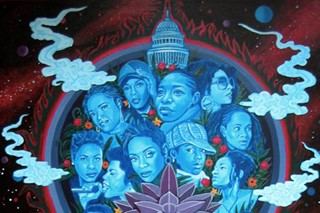 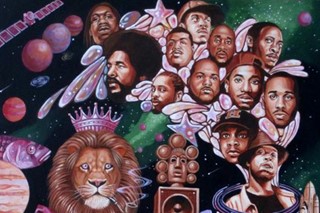 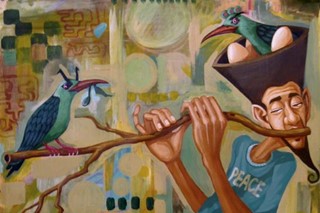 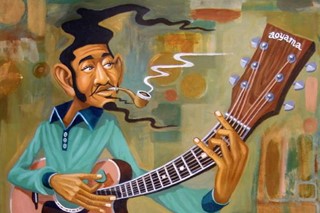 The Japanese psych pop artist Tokio Aoyama lands in London this week for his first exhibition in the UK, courtesy of Ancient Future. A modern day surrealist inspired by everyone from Salvador Dali to Sun Ra, Aoyama has built something of a cult following thanks to his LP sleeves for the likes of Georgia Anne Muldrow. Like the visionary Mati Klarwein whose afro-futurist murals adorned Miles Davis LP’s Bitches Brew and Live Evil, Aoyama’s work resides beyond the doors of perception, where cosmic vibrations and the mysteries of the natural world arouse a kaleidoscope of lysergic imagery.

While his vibrant otherworldly art is indebted to both psychedelia and surrealism, it also reaches much further back to the ancient spiritual arts of the East. Looking to the past to navigate the future, Aoyama’s paintings also take from the cut and paste aesthetic of the b-boys who have inspired him. And it is the music of black America that provides the subject for much of his art, from skateboard sketches of icons like Gil Scott Heron to a stunning canvas of De La Soul. To see inside the multicoloured mind’s eye of this most exploratory of artists head down to the Hoxton Gallery.

Dazed Digital: When did you first begin painting and what were your main inspirations?
Tokio Aoyama: I first started painting when I was a child around two or three years old. I used to draw everywhere. I was inspired in my earlier years by comics. Around 19 I started to take painting more serious and started painting on canvas at that time I was being influenced by American music and culture.

DD: You grew up in the countryside of Japan but your subjects are mainly from urban American culture. How do these contrasts define your art?
Tokio Aoyama: Although I grew up in the countryside my Dad and older cousin listened to jazz, funk and soul music. I also went to America around 10 years old and lot of what I saw inspired me. So yes my art has influences of urban American mixed with Japanese influence. I can best describe it as riding a Harley Davidson wearing a kimono.

DD: You’ve spoken of how living in Seattle made you more aware of the cultural differences between USA and Japan. Did this have an impact on you as an artist?
Tokio Aoyama: Yes at the time I was moving to Seattle it wasn’t necessarily trendy or hip to be into traditional Japanese culture. We are influenced by the west a lot nowadays.  Moving to Seattle made me more aware that “I’m Japanese” and that Japanese traditions are deeper than I had thought.  I felt I was imitating American art and needed to include my Japanese roots and Asian culture in my work.

DD: The great surrealists like Dali have obviously inspired you but I also see in your work touches of Mati Klarwein. Was he a conscious influence and if so how?
Tokio Aoyama: Yes, I am influenced a lot by Klarwien. The first time I saw his art was on Miles Davis' Bitches Brew album. I thought wow… I had never seen that type of art before. I felt that his paintings were spiritual and had a story to tell. The colours and imagery he used had a real personal message for me. His paintings are beautiful but at the same time have an ugly element. He makes fantastic paintings combining these two extremes.

DD: You’ve hooked up with Georgia Anne Muldrow and Dudley Perkins – do you a feel a connection to the slightly hippy vibe of that West Coast scene?
Tokio Aoyama: Yeah I love their music, the message, the beats and melodies. They have this unique style of chanting hip hop mantra music.

DD: How does music influence the way you paint?
Tokio Aoyama: Music gives me inspiration and ideas. When I’m working on a musician’s album artwork for example I will listen to their music. Sometimes I prefer silence.

DD: You’ve become more influenced by the ancient arts and in particular spiritual paintings. What is it in these works that inspires you?
Tokio Aoyama: It has a history behind it. It aims to demonstrate the balance of things… like the beautiful ugly paintings of Klarwien. It’s like seeing a pretty butterfly but when you look up to it very close it gets uglier. It’s these observations in all things I find interesting and inspiring.

DD: Continuing from this how does Shintoism influence you as an artist?
Tokio Aoyama: Shintoism is very broad each region has its own style of clothing, dance music etc. Village to village, town to town. Shinto differs but it’s my roots. I grew up with it so yes it influenced me.  It’s like... I don’t call myself Shinto but I’m proud that is part of me and where I’m from.

DD: And finally music has always been central to your work. Who has been inspiring you of late?
Tokio Aoyama: A guy in Australia I just did an album cover for called Electric Egypt.

The Ancient Future Exhibition in London will be Tokio Aoyama’s first solo exhibition in Europe. The exhibition will be complemented by a series of “Live Paint” sessions and workshop seminars. 9 Kingsland Road, London E2 8AA. Exhibition is open daily from 11am - 7pm until 7th September 2012.