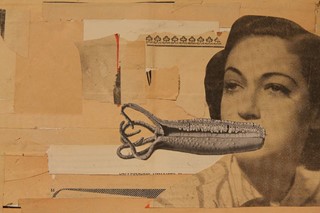 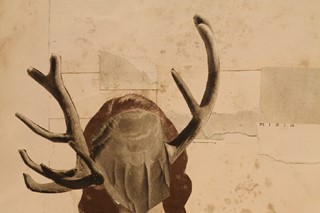 This weekend, the Untitled Gallery in Manchester opens an exhibition of Graham Hutchinson’s neo-avant garde collages, ‘Have A Collapse’. Hutchinson’s work plays it old school with found magazine cut outs, pasted designs and newspaper print. The Sheffield-based artist is inspired by pre-1945 continental avant-gardists, which makes for an intriguing contrast to a lot of the audio-visual work which is put out these days by contemporary artists.

I find cutting anything up highly therapeutic and offers me some kind of release. Working in collage gives me the chance to get ideas down quickly, which really suits the way I work

Dazed Digital: Where is your studio based and why did you decide to settle there?
Graham Hutchinson: I’m based at Bloc Studios in Sheffield. It is a great place with nice people and a cool little art gallery.

DD: What is your background? How long have you been practising?
Graham Hutchinson: I studied Fine Art at BA and MA level and have been making collages for the past five years. Prior to this I made installations/found object assemblages but lost my way with it as the work didn’t seem to possess any emotion or feeling. So I had to change to medium. I want to make work that means something. That is honest and true -like when you see a film and an actor may move you or you hear a song and it gives you ‘tingles’. I want to make work that I believe.

DD: What interests you about collage-making?
Graham Hutchinson: Glue. Scissors. I find cutting anything up highly therapeutic and offers me some kind of release. Working in collage gives me the chance to get ideas down quickly, which really suits the way I work. I don’t have the patience to start a piece of work and then return to it the next day. I also see collage as quite a negative process- to deconstruct, to manipulate found imagery, this process is integral in achieving the works aim. I am drawn to the rituals, tensions and absurdity that occurs between the two sexes.

DD: Where do you source your materials?
Graham Hutchinson: A large portion of my source material comes from my uncle who runs a waste paper recycling company in Hartlepool. He often comes across weird and wonderful magazines, books etc. One delivery I received included 100’s of 1940’s women’s magazines which has provided the bulk of my current practice. I also am a regular in charity shops scouring for books, journals, magazines containing imagery of a physical nature.

DD: Do you use your own photographs?
Graham Hutchinson: No. I only use found imagery. I am excited by the chance element of finding an image that I can work with or relate to. The excitement of finding and collecting is almost equal to the feeling I get when a piece of work is completed.

DD: Your work is heavily based in early 20th century tradition. Which contemporary artists interest you?
Graham Hutchinson: Maurizio Cattelan has constantly excited me. His determination to be proactive is astounding. I also love the paintings of Sean Landers – highly personal and honest.