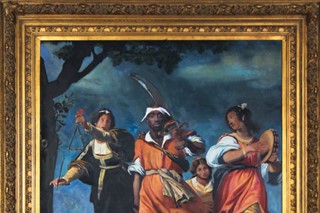 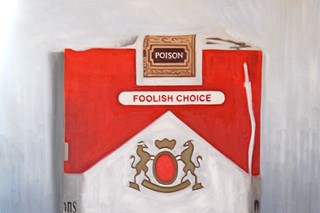 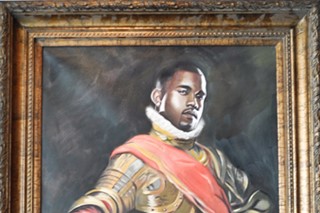 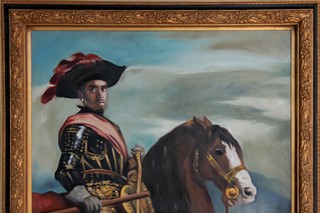 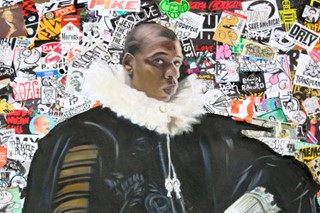 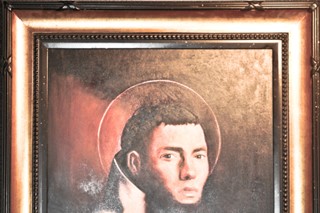 Meet KAI, the 21 year old self-professed “good” boy of the Los Angeles street art scene and one of the city’s most promising urban artists. Turning less colourful shades of the scene’s reputation on its illegitimately spray-painted head, KAI first gained recognition after his ‘Morons’ project, a series of street installations around LA of his own anti-smoking Malboro ‘foolish choice’ cigarette packets.

My street artwork is a reflection of that realisation from a young age… It’s ANTI advertising, it’s sort of a way to balance advertising with honesty. That’s what came through with the Morons collections and Marlboro. I replaced the iconic imagery of Marlboro cigarettes with the headline “Morons”

KAI’s latest project, 'Now Royalty', has taken his work off the streets and into the gallery. His recent debut solo show at the Guetta Gallery in LA, features hip-hop moguls such as Eminem, Drake, and Kanye donned as medieval royalty. Dazed caught up with KAI just after the show’s launch to find out more...

Dazed Digital: How do you think growing up in Los Angeles has had an influence on you?
KAI: Well, Los Angeles is a very established city, meaning you’re always surrounded by advertisements and commercials from major corporations in a saturated environment. Growing up I started to realise how much art and design goes into advertising as a mode to draw consumers in. In many cases, I realised it is made to brainwash the consumer.

My street artwork is a reflection of that realisation from a young age… It’s ANTI advertising, it’s sort of a way to balance advertising with honesty. That’s what came through with the Morons collections and Marlboro. I replaced the iconic imagery of Marlboro cigarettes with the headline “Morons.”

DD: Why do you think some people have issues with street art?
KAI: When there are any problems with street art, I think it stems from the art defacing private property. The people who own the property really hold it close to them because it’s something that took them years to obtain. This will be a constant problem because street artists will always be looking for new canvases to work on. However, in some cases, property owners embrace the art, encourage it and even ask for it.
Also, a lot of people and culture critics assume we are just punks and do not take our work seriously. They don’t view our work as an art form and associate it with negative connotations.

DD: You're so young for such a strong socially conscious narrative. What drives the anti-consumerism messages in your street art? Were you always so socially aware?
KAI: Well, I was raised by amazing parents! Kudos to them! They were always very straight with me and told me that I hold my future in my own hands. I always tried to stay "good" (which is funny because street art to the establishment is bad) and away from things that would could affect my future. My parents were great role models, so I have to thank them for leading me down the right path and encouraging me and supporting me. I always found art to be a great medium for spreading a message and sharing a belief. I want my street art to help people, to get people thinking.

DD: You've just done your first solo show. Do you feel apprehensive about leaving the street environment and putting your work into the context of a gallery? For an artist whose work is so tied to the streets it must be a pretty daunting experience...
KAI: I'm happy I got to show another side to my art. While I am known for my street art, I was mentored to appreciate art history and all forms of art, including classical painting. I am not a one-dimensional artist and I challenge myself to work in many different forms and mediums.

I guess the 'Now Royalty' collection brought my art into a new light, which is going to be fun and will be interesting to see what happens. I hope it will open some creative doors for me. I just want to keep going back in the studio and create more work. Whatever comes of it, I’ll be thankful for.

I already have a couple of ideas for the next exhibit… but I don't want to give it away yet. In the meantime, I will continue to work do street art and work with wheatpastes and silkscreens. We have received a great response when I brought a few selected works to SXSW, and I hope that the entire exhibit can travel. Hip hop is global - I love getting emails from around the world about Now Royalty.