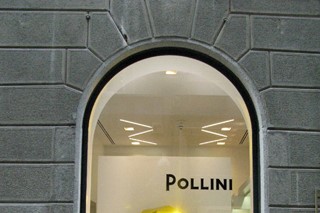 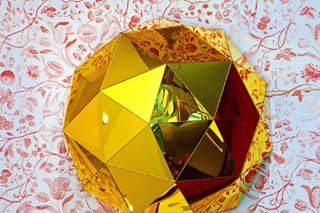 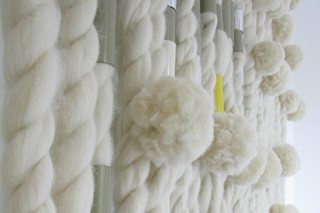 There is an interesting mix of technology and craftsmanship in the installations created by architect Mehrnoosh Khadivi, of London-based Craftwork Studio, for Milan’s Pollini boutique. “Mirror Drop 1” is a kinetic wall hung geodesic dome à la Richard Buckminster-Fuller made of acid yellow mirrors that create light games, while “Wool Works” integrates natural wool and aluminium elements, fusing large scale decorative textile design with jewellery and macramé. Both the pieces are handmade and hint at the high quality of the historical footwear brand founded in italy in 1953. Khadivi recently redesigned Pollini’s via della Spiga concept store, housing all the men and women’s footwear and accessories.

Dazed Digital: What inspired the “Mirror Drop 1” geodesic dome (any Richard Buckminster-Fuller references) and “Wool Works”?
Mehrnoosh Khadivi: “Mirror Drop 1” is inspired by Buckminster Fuller’s domes. And by the spirit behind the homemade 1960s dome structures at Drop City, the first American hippie community, built on the outskirts of Trinidad, Colorado, by a group of art students inspired by a Buckminster Fuller lecture. Here domes became associated with a new lifestyle and subculture: a mix of acid visions, political idealism and chopped out car top panels. Drop City became a stop off point for hundreds of hitchhikers on their way to the Haight-Ashbury hippie mecca in 1967, turning into the first rural hippie artist community.

“Wool Works” was instead inspired by Sheila Hicks and a fascination with combining different disciplines together. Playing with scale in an unexpected way creates something unexpected, so there is a strong visual interplay in this piece between graphics, materials and textures.

DD :Is this the first time you've done such a project that unites fashion and design during Milan Design Week?
Mehrnoosh Khadivi: It is the first time I am showing in Milan and I am very happy to have this opportunity. I designed the store for Pollini on via della Spiga very recently and it was only completed in Febuary of this year during Milan Fashion Week, so it is a fitting backdrop for the work.

DD: In the last few years the boundaries between fashion and architecture have often been eroded by collaborations between architects and fashion designers: would you ever design shoes or accessories for Pollini?
Mehrnoosh Khadivi: If I was invited to I would love to work on accessories and shoes for Pollini. We did do a concept shoe a couple of years back with a one-off handmade sample as part of a macramé project based on taking a single macramé knot and interpreting it in several ways using only black leather and rubber.