John Wood and Paul Harrison talk to us about burning piers, sinking boats and why going to work is a complex procedure 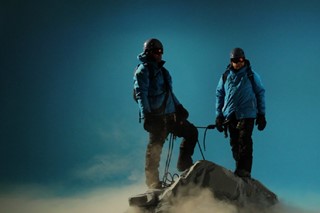 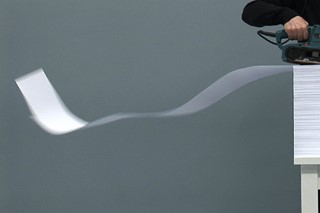 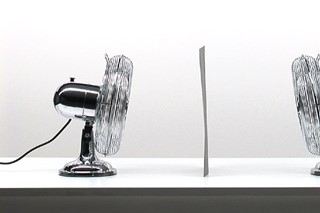 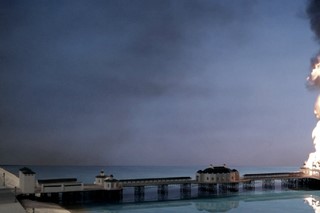 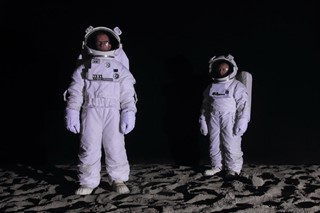 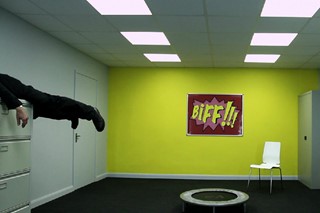 Two bored astronauts wander aimlessly on the surface of the moon, while down on Earth two mountain climbers look slightly lost atop a (fake) snowy Everest. In the distance, a typically British seaside pier burns under a painted blue sky, one kilometer of stacked A4 sheets is eaten away by an electric sander and a man rides a bicycle in the office. These are the bizarre, tongue-in-cheek scenarios of John Wood and Paul Harrison’s work and some of the many things that happen in ‘Things That Happen’, the artists’ new solo expo also marking the inaugural steps of the new Carroll / Fletcher gallery in the West End.

Since 1993, Wood and Harrison have been collaborating together, exploring physical and psychological environments through videos, text pieces, drawings, sculptures, doodles and half thoughts, all coming from somewhere within a series of twenty year-old books. Sheets of paper, photocopiers, desk fans, clips, ladders, lamps, cardboard boxes and domestic appliances are borrowed from our quotidian lives and given alternative uses, becoming the artists’ co-stars in quietly subversive actions and orchestrated studies where constructed locations meet an intelligent vocabulary of enigma and wit. Here, we uncover their man-made, minimalistic make-beliefs and find out about their will to represent the world from the confines of a studio.

Dazed Digital: 'Things That Happen' is such a good title. How did you come up with it?
John Wood and Paul Harrison: In the 1970s, when we were young, there was a series of books by Ladybird. They still exist but at that time everyone had them, you grew up with them at school and at home. Some were titled alpha-numerically; for example, 1c read and write, 2b have a go, 2a we have fun. Others were slightly more advanced and had titles like Magnets, Bulbs and Batteries; they consisted of a series of experiments and activities. Things That Happen seemed like a title we might have chosen for one of those books if you were interested in burning piers, hanging around on the moon or putting paint into food blenders.

DD: What drove you to experiment with everyday objects and spaces?
John Wood and Paul Harrison: Everybody experiments with everyday objects and spaces; it’s just that we have a camera around when we do it. For instance going to work is an incredibly complex thing to do, getting dressed, remembering things, leaving at the right time, catching a bus (the right one, the right number, going in the right direction), bumping into people, not bumping into people, avoiding people, not falling over…

DD: Where do all these crazy ideas come from?
John Wood and Paul Harrison: They come from a book, or more precisely a series of books. Sketchbooks and notebooks we have been using for the past 20 years. These ideas start as drawings or statements, when the time is right they are made into something else, a video, a text work, an object or another drawing.

DD: Many of your works have a very humorous approach - how do you keep the straight faces?
John Wood and Paul Harrison: Because on the 32nd take of filming it isn’t funny anymore.

DD: What's the link between 'Bored Astronauts on the Moon' and 'Unrealistic Mountaineers'? What do they say about our quest to conquer the world?
John Wood and Paul Harrison: They are both places people dream about going to, but we liked the idea of not really knowing what to do when you got there, and that these very filmic or photogenic locations became very un-dramatic and perhaps a little disappointing. For us it wasn’t about the quest to conquer the world or space, although it clearly references that desire. It’s more about making an ongoing representation of the world, but all from the confines of our studio.

DD: What's the story behind the burning pier in 'English Disaster'?
John Wood and Paul Harrison: We should make it clear that the pier in the video is a model. When you see the piece it’s very clear that it is a model, in a model set with a model beach and a simple painted sky. It’s very unrealistic. We always liked sequences in films when, and this is pre-CGI, the action would cut to a model when an explosion or another event that was impossible to create or too expensive to re-create life-size would take place. The two things that always gave it away were water and fire, it’s hard to get the scale right. With English Disaster we made the action sequence without the rest of the movie.

DD: Tell us a bit more '10 x 10'. Why is Spiderman hoovering in an office?
John Wood and Paul Harrison: In 'Bored Astronauts on the Moon' and 'Unrealistic Mountaineers' we created environments that have Romantic or epic associations, whereas with '10x10' we wanted to make a very non-descript workplace or office. It is a fictional 100-storey building, with almost identical offices on each floor. The camera tracks down the building, looking in through the windows. To us the building represented a strip of film. We had various questions: what happens in a film? What are these offices? What is a job? Who designed this building? Why is someone wearing a Spiderman fancy dress costume? Is it a method actor with too much time on their hands?

DD: You have been collaborating for quite some time now - do you ever feel like really throwing things at each other? How do you keep the creative flow running smoothly?
John Wood and Paul Harrison: Maybe every 4 or 5 years we have a bit of door slamming and storming around, but we’re not very good at keeping straight faces in those situations. Laughter, high boredom thresholds and table tennis help us to think.

John Wood and Paul Harrison's 'Things That Happen' - from the 24th February to the 30th of March 2012 at Carroll / Fletcher gallery, 56-57 Eastcastle Street, London W1W 8EQ