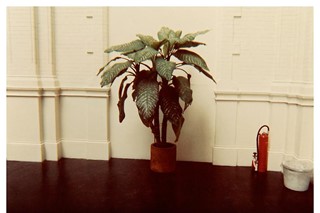 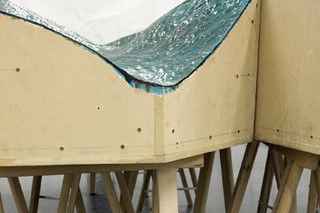 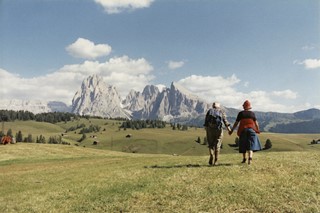 This month, Thomas Demand curates La Carte d’après Nature at Matthew Marks Gallery, New York – a trans-generational show inspired by the legendary surrealist painter Rene Magritte, or, more precisely, to the conceptual space opened up by the artist’s game-changing approach to his practice. Magritte’s imagery is, of course, ubiquitous and adorns porcelain mugs and plates the world over. However, the German photographer famed for his investigations into how we perceive what is real and what is not (shooting elaborate cardboard reconstructions of environments such as the Oval Office) holds Magritte in the highest regard, and believes his work more than holds its own in a contemporaneous setting.

In order to illustrate this fact he has created a labyrinthine immersive environment housing an unlikely cabal of international artists, of which Magritte is just one. Inside his unique netherworld you will discover everything from myriad images by the infamous deceased photographer Luigi Ghirri, films by art star Tacita Dean, concrete trees made by Jan and Joël Martel (originally made for the 1925 Exposition International des Arts Decoratifs) and a refrigerator-shaped coffin by the virtually unknown Ghanaian artist KudJoe Affutut. Here, Demand tells us in no uncertain terms why it’s important to take a stroll in your mind, and how the central concerns of art have never changed.

Dazed Digital: What made you want to explore surrealism and the spectre of Magritte?
Thomas Demand: The trouble with surrealism is that it gets put back in this mould of ‘irrational funniness’, or something, you know? That kind of thing where it’s like, ‘You would never see a man flying in the sky!’ That just gets even worse with Dali. But surrealism actually gives you a freedom of mind, and in a sense that’s its promise – to help you see things in another way; from another viewpoint. The thing is that you can’t paint the thought – you can only paint the things necessary for the thought.  That also means that you don’t paint for the painting – you paint to express thoughts during the process, but the finished painting doesn’t express the original thought. When you look at my work, for example, you realise: ‘This is not the oval office. It’s a rebuild of the oval office…’ What comes out of that distance between the ‘real’ image you have in your head, and the one you look at creates an opening – a wide field where fiction comes into play, and you can question what is the truth. That kind of gap opening up is what I saw in Magritte at some point, although I came back to him though his writing – his short stories and interviews. He was actually an amazingly eloquent person

DD: What you are talking about sounds like Claude Levis Strauss’s notion that it’s precisely the space where you’re not sure what’s artificial and what’s real that allows wonder to be engaged…
Thomas Demand: That’s the basic idea, and you need a story, at first, like a letter, but then at some point, you don’t need the story anymore – that’s what kind of interested me. I found this magazine Magritte kind of brought out. I don’t know how I came across it but when I saw it I knew immediately that it was what I needed for the show. Magritte would send it out to friends whenever he had something he wanted to send, making 14 issues over a stretch of 16-18 years, and it has all kinds of elements but it doesn’t ideologically have any stance, it’s just very open and free-minded. In fact, sometimes it was a blank postcard, and if you received one you would just have a blank postcard in your hand. It’s both full and empty at the same time. I thought that would be a nice structure to use for a group show, where things are related but they’re not necessarily made for each other – they come together for a moment and tomorrow they will be somewhere else.

DD: What kind of parallels did you want to draw between the works?
Thomas Demand: Well again, you can’t draw the thought; you can only draw the things necessary for the thought. I’ve been in many group shows in my career, where things kind of came together because of some arbitrary reason – because the artists come from the same town or they use the same medium, or something, and I always found it a little underwhelming. Group shows like this are great things because you can see that people have thought about the same things over a stretch of 180 years and come to different conclusions, but also to the same conclusions.

DD: What would you say were the concerns all artists share?
Thomas Demand: The question of what pictures give us, how do we form opinion of a picture and how do we form our understanding of the world through those pictures.  It is something that has changed over the centuries but it is the same concern between a Monet, a Picasso and an Andy Warhol – people just approach it from very different viewpoints. The theme of nature comes to mind because everybody has a drawn a plant at some point in their career. The notion of nature or a leaf or a bird in Magritte’s paintings are not descriptions of what nature looks like and how wonderfully inspiring it is – it’s about something else, and that’s what I was after in all the other people’s work. I didn’t want to hang Magritte in the same way as the rest though because the other work comes to you relatively innocent but the Magritte comes with all this baggage of being merchandise, so I thought I needed to make a space for that.

DD: Would it be fair to say that you’re involved in a process of trying to reclaim Magritte mass commercialisation, and draw the viewer back to very unique power of his images?
Thomas Demand: It’s true. They are very interestingly painted. Magritte is a middle-class painter and his work is kind of underachieving at the same time as being very sophisticated. If you stand right in front of them it’s a little bit of a good illustration, but then it’s actually much more than that. I spoke to people who fake paintings for rich people in Monte Carlo who like to keep their originals locked away, and they told me it’s easy to fake a Renoir no problem, but Magritte is really difficult to fake because it looks already a little bit like a fake. His works are really wonderful artefacts and outstanding objects despite the fact they have been exploited so badly.