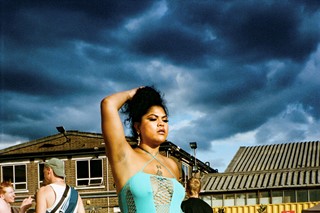 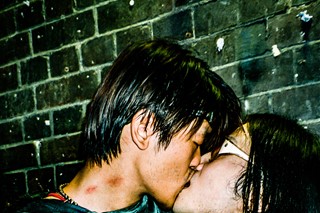 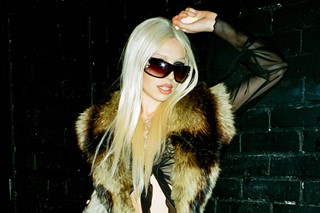 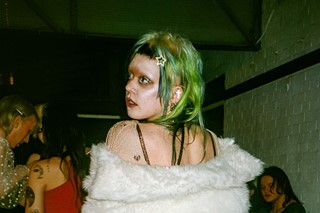 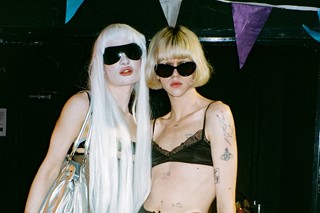 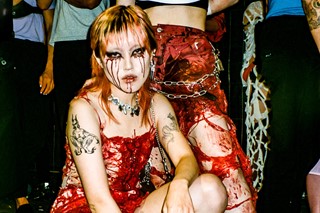 At first glance, El Hogg’s photos may seem like a simple documentation of youth and raving culture, but they are so much more. Hogg, a graduate of Central Saint Martins, captures safe spaces, moments of honesty, and pleasure. Despite falling into photography unintentionally, what ultimately made them fall in love with the practice was the freedom to be whoever they wanted to be that it represented.

Growing up in Nottingham, they “didn’t really have a safe space somewhere to be myself in such a free way.” When they enrolled at CSM, they were opened up to an entirely new community of broad-minded creatives, yet a small sense of loss and uncertainty lingered. “Everyone had their thing,” they explain. “And I kept thinking ‘why can’t I find mine?’”

So when Hogg picked up a cheap film camera from a charity shop and began taking pictures of their friends, a weight was lifted from their shoulders upon “finding something out of joy, without a goal or plan to become a photographer.” Despite being unsure about how serious this ‘thing’ was, Hogg knew photography was something they were compelled to explore.

“I’m the person in the corner of the club, shooting portraits, I’m not the one dancing anymore” – El Hogg

For a while, Hogg didn’t have the money to remain in London amid the artistic scene they felt so drawn to. “I ended up working in a shitty pub in Nottingham and as a photographer in London,” they explain. With the tenacity and dedication of an artist desperate to be able to do what they love, Hogg recalls: “I would finish a double shift at the pub, get on a National Express bus to London, sleep on the bus, go shoot at night, then leave at six in the morning and get back to Nottingham.” And repeat. “Obviously, it couldn’t go on forever.”

Now, Hogg has found their own safe haven; sharing a thirty-person warehouse in London with musicians, performers and models whom they regularly collaborate with. They explain: “We all help each other out.”

Having photographed queer raves such as Inferno, Riposte, T-Boys Club, and Babylon, Hogg basks in the joy of capturing queer people in an environment in which they’re comfortable. “I’m the person in the corner of the club, shooting portraits,” they explain, “I’m not the one dancing anymore.” The beauty of it is that Hogg doesn’t have to be dancing or drinking to feel like they’re a part of it all. ”If I wasn’t shooting it, I would still go.”

Focusing on portraiture, Hogg’s photography is about people and their uniqueness, rather than the act of partying itself. “There is amazing music and so many talents there… I don’t know if people get ready for hours just to get hammered,’ they say. “So, it’s not just about partying.”

For Hogg, it’s about capturing beauty. Blood-tainted dresses, futuristic make-up and punk hairdos… in Hogg’s photos, each individual is entrancing and distinctive. “I’m drawn to the people, I’m drawn to the aesthetics,” Hogg says. “There’s no one hotter than queer people.”

Hogg cherishes documenting queer identity and self-expression in their photography. “In my own transition, dressing up is something I’ve stopped doing. But I can go and appreciate everybody else’s creative vision.”

The idea of cramming all of these individuals into one frame without their knowledge is unappealing to Hogg. “In a safe space for trans and queer people who are all on their own journey, it can be inconsiderate to shoot without asking,” they explain. “Especially when people are transitioning.” The trust that people at these events put in Hogg is something the photographer treasures immensely. “I want people to see how beautiful they are in the photos.”

Visit the gallery above for a closer look at El Hogg’s ongoing project.