A new exhibition at London’s Chelsea Space, From the Volcano to the Sea: Part II, explores the collective’s fascinating history

4October 2022
TextZoe Whitfield
From the Volcano to the Sea: Part II6 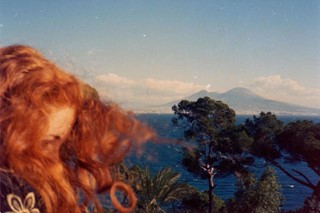 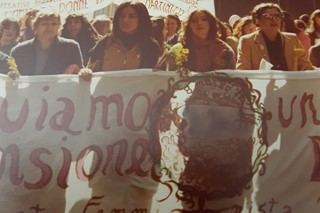 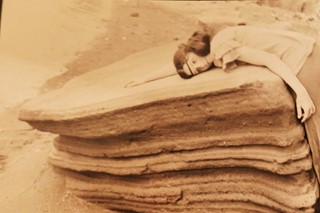 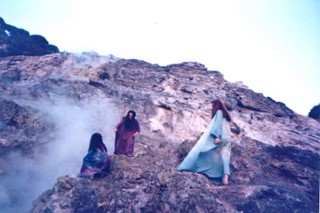 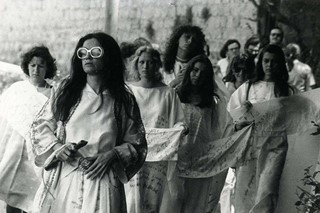 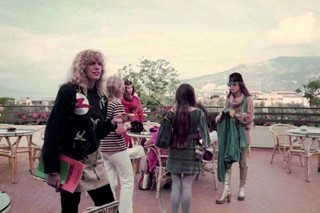 When writer and curator Giulia Damiani began researching Le Nemesiache almost a decade ago, she found little online to interrogate. Studying for an MA in critical writing in art and design, she’d been working on a project that examined politics and activism in the 1980s when she learned about the group, who were a Naples-based feminist collective that experimented with creativity as a route to liberation and opposed the exploitation of the landscape surrounding the city, founded by Lina Mangiacapre in the 1970s. “At that moment [in 2013], there seemed to be a shift in academia, in terms of interest towards Italian feminism,” she tells Dazed. “I kept finding references to this group, but only brief mentions here and there.”

One of the first works she heard about was Follia come Poesia (Madness as Poetry): between 1977 and 1979 Mangiacapre lived and worked in Frullone Asylum, a psychiatric institution on the outskirts of Naples, collaborating with residents of the women’s ward on a film project. The short, a version of which still lives online, is typical of the collective’s commitment to their surroundings and highlights the importance of physicality in their work, of which psicofavola or psycho-fable (a form of consciousness-raising focused on the body and myth) was fundamental.

“There wasn’t a website, so I went to Naples,” continues Damiani of that initial introduction. Having found an email address with a familiar name, she ended up connecting with Lina’s sister Teresa, who introduced her to further members of the group. Their stories, together with archival costumes, videos, documents and other ephemera, make up From the Volcano to the Sea: Part II, a new exhibition at London’s Chelsea Space that explores the collective’s history.

“They’d been very careful, since the beginning, about preserving their own materials,” says Damiani. Founded by Mangiacapre – a playwright and filmmaker who established the Elvira Notari Prize as part of the Venice Film Festival, renamed after her when she passed in 2002 (and subsequently received by Sofia Coppola for Lost in Translation) – on her return from studying philosophy in Rome, the group’s moniker refers to Nemesis, the Greek goddess of revenge against arrogance, while their practice was largely shaped by the geography, geology and methodologies of Naples. “For me, it’s a ritualistic way of coming together and experimenting with language and with the body to create a shared awareness in connection with the landscape,” offers Damiani. “Most of the time, reworking ancient stories and mythologies, to show the patriarchal infiltrations.”

On March 8, 1977, International Women’s Day, members of the group signed the Manifesto for the Appropriation of Our Own Creativity. “WE DENOUNCE the violence which deprived ourselves of our bodies, of our expressions and of our extensions,” it read. “CREATIVITY IS POLITICAL, it is life, routine, erotics, in harmony with nature and the cosmos.” There was no separation between regular life and creativity explains Damiani of the group’s founding objectives. “It was a 360-degree approach. And I found that interconnection – between the landscape, their personal stories and creativity – interesting, just in thinking about what feminism could mean for people.”

At the time, second-wave feminism was composite in Italy, with different movements and groups in major cities all around the country. “It was a blooming era,” notes Damiani. “And Le Nemesiache represented a microcosm that created connections with other places and other times.” Embracing mythology and embodiment in a way other feminists weren’t, the group’s work received a mixed reception when it first premiered. “They were seen by others as being this visually creative, somehow wild group who were working with the body and performance, [but] maybe contributing less, theoretically, to the cause,” says the curator. “They dressed a certain way and stood out in a crowd. They had mythological names, and were quite uncompromising in some of their positions. Members have told me it was sometimes difficult for other women to accept the messages they shared.”

Despite Mangiacapre’s cultural impact, the group remains largely unknown today, yet the significance of their work shouldn’t be understated suggests Damiani. “It's the multi-dimensional quality – it unfolds in different directions. They created their own symbol, were writing things by hand, making performances, doing actions in the landscape, making films. And the bond, the way the women worked together, to make something that was larger than just an artistic project – it triggers a desire for more feminist creativity today, and asks questions about living in a world still structured around unequal structures.”