Titled Warm Shores, the monuments tap into the local community to highlight the legacy of the Windrush generation 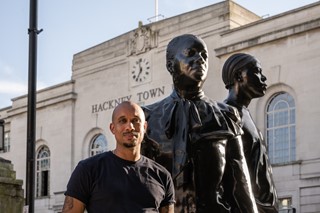 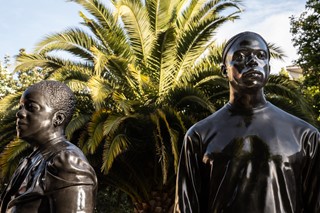 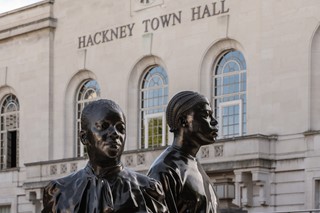 Back in June 2020, Hackney Council announced the commission of two new public artworks, to stand outside its town hall in east London. The first, a fruit-themed tribute to the Windrush generation by Veronica Ryan, was revealed to the public in October the next year. Now, the civic art project has been completed with the unveiling of Warm Shores, a pair of large-scale sculptures by the British artist Thomas J Price.

Launched to coincide with Windrush Day (June 22), Warm Shores draws directly from the local community, with Price inviting 30 multigenerational residents – ranging in age from 20 to 91 years old – to be digitally photographed with a 3D scanning device. Composites of these images were then used to create the final artworks: two nine-foot figures, male and female, cast in bronze.

Importantly, these fictional figures aren’t tied to any one individual, but tap into the broader legacy of those who arrived on the Empire Windrush ship 74 years ago. They also aren’t raised up on plinths – a conscious decision that resists the in-built hierarchy of traditional public monuments.

“The figure is not of a famous or historic individual, they will not be posed triumphantly, or heroically, and they will not be dressed in the costume of power,” Price told Dazed when the commission was first announced. “The figure will bring all the intrinsic value and high status with [it] via its naturalism and resistance to the normal tropes of the monument, whilst still making a bold statement via its scale and the space it unapologetically occupies – a radical act for any ‘black body’.”

“I feel incredibly honoured to have the opportunity to make a lasting statement about the immense contribution Windrush has made to the country, by creating a physical beacon that speaks to the visibility and value of the Windrush generation in a way that places emphasis on their humanity,” he added. “After the distress caused – and still being experienced – by the Windrush Scandal, this seems like a very necessary part of developing a wider social awareness of these issues.”