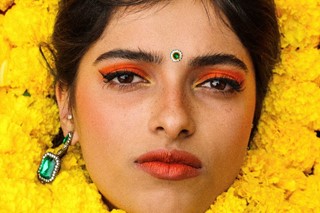 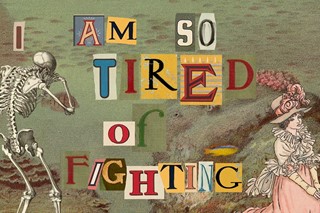 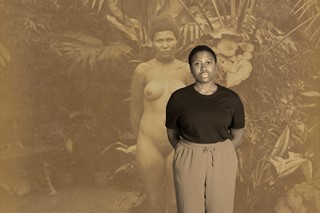 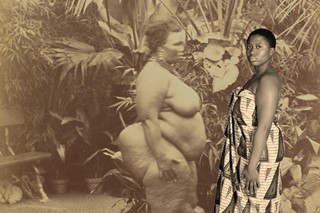 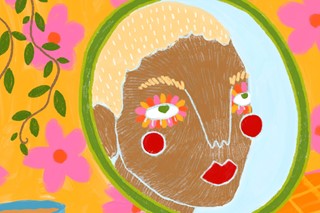 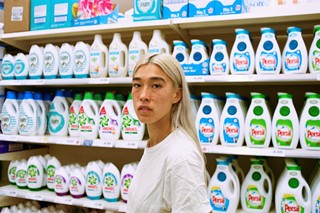 In 2017 – just months before conversations surrounding sexual harassment came to light under the global #MeToo movement – photographer Eliza Hatch launched her Instagram account @CheerUpLuv. Inspired by catcalls demanding that women “cheer up” or “smile”, the platform documents people in the settings where they were sexual harassed and cat-called – providing a creative community space for women and people of marginalised genders to reclaim their voices on a formerly taboo subject, and in turn, helping to dismantle the structures and beliefs that enable abuse. Around the same time, queer illustrator Bee Illustrates began posting their own artwork on Instagram – discussing subjects of feminism, mental health, and queerness through their distinctive neon-coloured prints and educational short essays.

Now – four years later – the two have teamed up to create Hysterical, a London-based exhibition celebrating women and people of marginalised genders fusing art and activism in their work. “We felt passionate about showcasing creatives who are using art for activism,” Hatch explains, noting that she and Bee came up with the idea within minutes of first meeting each other. “It’s something we both regularly engage in ourselves, yet barely see in a gallery context.”

Named to subvert the notion of “attention-seeking” or “dramatic” women and reclaim words that have historically been used to oppress people of marginalised genders when speaking out on the issues they face, Hysterical features work by up-and-coming photographers, designers, filmmakers, and illustrators – each bringing a unique, critical lens to topics of feminism, gender, queerness, mental health, race, climate change, and more through their art.

“It’s an accumulation of complex issues made easy to comprehend in an empowering way, all with an underlying theme of positive change,” explains exhibited illustrator and designer Beth Suzanna, whose featured works explore forms of joy for women: female friendships, self-expression, and empowerment through hair for women of colour. “My work is tactile, intimate, and playful, focusing on the joy of being a woman and marginalised person. I want to make sure the joy of these people is represented alongside the hardships they face.”

Meanwhile, featured artist Tayo Adekunle, uses her photography to explore the fetishisation, commodification, and sexualisation of Black women’s bodies through the lens of colonial photography and the display of Black people. In her pieces “Artefact 2” and “Artefact 3”, Adekunle places images of herself alongside ethnographic photographs of Black women, which were once circulated around Europe as pornography, to question the images’ subjects’ agency.

“It’s an accumulation of complex issues made easy to comprehend in an empowering way, all with an underlying theme of positive change” - Beth Suzanna

“I think people can feel that activism is an inherently violent act which seeks to force opinions on others… I think there is an idea that activists work to tear certain groups in society down,” states Adekunle. “For me, I look to uplift groups so that everyone can enjoy our society equally and in order for that to happen, certain systems need to be disrupted and dismantled.”

She continues: “I hope that people use my work as a visual cue to go and research the histories I discuss in my work. I think the best way to enact change is by providing different ways for people to access information, and I hope that my work can act as an ‘in’ for some people.”

Alongside the exhibition, Hatch and Bee have organised a creative workshop on feminist zine-making with Grrrl Zine Fair and a panel discussion with BRICKS magazine founder Tori West, activist and artist Gina Martin, anti-racism activist Maxine Williams, writer Prishita Maheshwari-Aplin, and more. All proceeds from each event will be donated to gender equality profit UN Women UK and LGBTQ+ charity UK Mermaids.

Through platforming each featured artist and creative, Hatch and Bee hope to capture Gen Z’s unique approach to exploring the intersection between art, politics, and activism. “Hysterical brings together so much of what we see online in terms of creativity and activism and materialises it into a physical event – something I think we have all missed over the past couple of years,” says Bee. However, they add: “I think it is important to note that activism transcends generations – although activism today may look very different to even as recently as a decade ago, people of all ages, generations and abilities should feel encouraged to show up for a cause in any way they can.

Take a look at the gallery above for a glimpse of some of the artworks featured in the exhibition.