Memeplex is a new show exploring the effects of memes on our post-human brains, featuring artwork from David Cronenberg, Suzanne Treister and Katja Novitskova 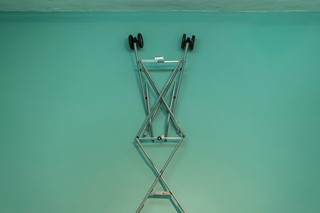 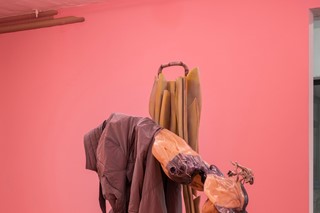 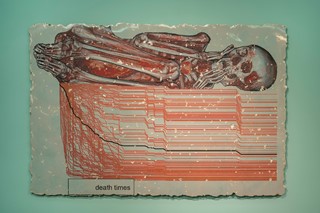 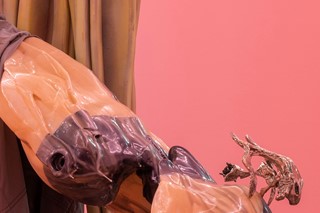 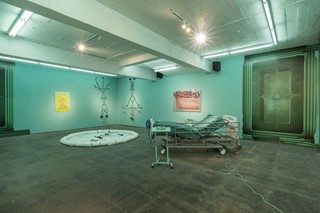 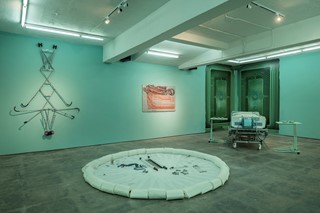 If you’re visiting Memeplex – a 12-artist group exhibition at Seventeen Gallery, London – you will find yourself in an operating theatre of a shadowy neuro-ops clinic. A nurse explains that you’ve just woken up from a medical procedure. Meme mites – self-replicating entities that feed off the human brain – have been implanted into your cerebral cortex. You’re told that an alpha meme will soon take over 80 per cent of your mind, though what this means (memes?) has yet to become clear. An extract of Bobby McFerrin’s 1988 acapella track “Don’t Worry, Be Happy” plays ominously in the background. Stuck in a state of non-reality, we speculate: is it a symptom of our unconscious, or the result of a sinister sonic sedative pumped into the operation room?

Engineered by Berlin-based art collective Omsk Social Club and UK-based artist Joey Holder, Memeplex takes the form of a choose-your-own-adventure, where visitors become active participants across a series of mind-altering scenarios. “Memeplex is almost two stories in one. The first explores the implementation of ideas, belief, and conviction that occurs through memetic artefacts,” explains Holder. “They are political living memes that attach themselves to the host and eventually perform an action.” The memes in question span politically from left to right: “We are both interested in exploring the role that digital culture plays in the construction of belief, examining techno-socio-political-cultural memetics; and how these are capable of affecting our worldview,” she adds.

As you move between tubes of hair samples, silver kidney trays, and deconstructed surgical instruments, an unsettling, ambient score by the prolific Chinese artist Yikii flickers between moments of dread and beauty. A hospital bed undulates with air, as if breathing. Hovering above it is Berlin-based artist Katja Novitskova’s work that imagines a ‘patient survival curve’ with a CT scan of a Peruvian mummy – an unsettling presence that only adds to the unsettling atmosphere. “The combination of both images offers a symbolic pareidolia, thick with myth-making and conspirological world-building,” says Omsk Social Club. Elsewhere, Kinke Kooi’s botanical and anatomical illustrations depict seamlessly intertwined bodily organs, flowers, pearls, and female contraceptive pills that form a womb-like garden.

In the Baker-Miller pink-walled recovery room, a double bed houses a tarot deck by UK-based artist Suzanne Treister. “This particular deck that Treister created explores histories of scientific research behind government programmes of mass control, investigating parallel histories of countercultural and grassroots movements,” explains Omsk Social Club. Through the use of tarot archetypes, Treister’s work explores “the development of cybernetics, the history of the internet, (and) the rise of Web 2.0 and its increased intelligence gathering”.

Across from the bed, David Cronenberg’s 1999 film eXistenZ, a foreboding virtual reality body-horror about cybernetic video games, is broadcast on a screen. In the film, players are plugged into a virtual reality game via their ‘bio-port’, which is surgically inserted into their spinal column. “It may seem extreme with its gory body horror, but it brilliantly portrays the player’s schizophrenic predicament with their inability to tell the game from reality,” explains Holder. Here, the body functions as a skin-tight panopticon, a self-policing entity that’s so meme-pilled it cannot separate the red (reality) from blue (simulation).

Sitting at the crossroads of sci-fi, technology, and the occult, Memeplex invites us to ponder how memes – seemingly superficial, funny artefacts – shape our beliefs and, subsequently, our political thoughts and actions. For example, the exhibition tells us that meme mites are sponsored by various human factions to implant ideologies into our brains, mirroring the ways in which social media, and various sub-sects within it, enforce certain belief systems. It also evokes the work of artists such as Joshua Citarella and Brad Troemel, who’ve traced the radicalisation of Gen Z through memetic subcultures on Instagram and Discord.

“I often think that memes are far more interesting than art these days. They operate through a shared mind and mutate throughout the network,” agrees Holder. “Memes present a kind of live commentary of what's going on in the world, becoming part of our cultural psyche.” So, if memes (and the virtual world at large) have the power to alter reality, does this mean we’re slaves to the meme? Or, is it an example of what David Rudnick calls digital prime: how online serves the IRL. Perhaps the effects of memetics aren’t as Cronenbergian as Memeplex suggests. But once they’ve wormed themselves into your head, it’s difficult to imagine a world without them.

Memeplex is on show at London’s Seventeen Gallery until February 5, 2022