From surrealist dance animations to personal photo series, and AI creations, we unveil the commissions created by the finalists of the Gap x Dazed New Gen Gap initiative

Over the summer, visual artists responded to a brief set by Gap and Dazed for the launch of New Gen Gap, an initiative providing new artistic opportunities to those based in the UK and France. Entrants were asked to submit new or existing work that answered the question: How is your world changing post-2020?

In these incredibly unprecedented times, these six visual artists have refused to compromise their work, instead finding new ways to execute their artistic visions, learning new skills to adapt to a shifting climate, and even channelling their individual and shared situations into their creations.

The artists were also awarded a £1000/€1000 commission to create a new series of work which reinterpretted GAP products.

Each took to the challenge head on and emerged with dynamic new bodies of work – all of which Dazed is excited to debut here, alongside artistic statements from the finalists.

With many of us spending our time physically apart, it’s unsurprising that a common thread between many of the artists’ commissions was a sense of togetherness. For example, Alya Hatta choreographed a series of Gap-clothed dancers, set amongst a surrealist backdrop of the cosmos, a forest, and other psychedelic scenes for an animated short film. Louis Tuakli cast his close knit group of friends as models for a photo series which aims to blur the lines between individual mental health and our shared global issues. And Will Sacedo’s vibrant collages physically unite people through cutting, pasting, and layering different images, as well as figuratively, as an homage to the creative collective action of young people.

Check out all of the commissions below.

Inside the lost years of Yayoi KusamaAfter achieving success in New York in the 1970s, the artist moved back to Japan after a series of mental breakdowns and suicide attempts

“‘Whatever it is’ is a direct response to the era of the pandemic, how we cope with current times, and what our future could entail. It plays off of the dysfunction of the present by combining a group dance sequence with a host of discombobulated text, and visual and audio clips intended to disorientate (the viewer).

“These scenes are derived from emotional responses to self-isolation, the realisation of our dependence on the internet, and speculation about what direction a pandemic could push our world into. The video features a Covid-19 compliant group of six (including the viewer) performing a dance sequence referenced by popularised dance moves and daily routines to elicit a satirical and false sense of unity and positivity that is heavy in today’s online and offline atmosphere.

“The work I’ve made for this particular series seems to revolve around making characters based on each item of (GAP) clothing. I started by hanging up all of the pieces in my room and spent about three days looking at each of them non stop, observing the colours, the patterns, the fabric, the fit, etc. I tried to envision what type of person would be wearing the clothes and for what occasions. I wanted the characters to be heightened versions of people that could exist in everyday life – to be colloquial but still very glam. Each photo is a celebration of the factious people. I love them all and had a lot of fun making them and their little stories.” 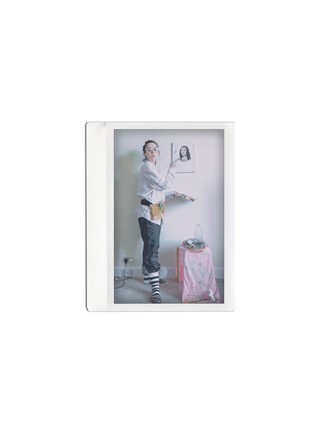 “For this project, I played and worked around the idea of creating synthetic fashion images, investing my research into what I believe will become the future of the fashion image as we traditionally understand it.

“I decided to generate images without actually shooting them – generating them from scratch, in a process which references photomontage, which means finding a lot of pictures and gluing them together. I imagine using AI for every part of the fashion (image making) process – from visualisation to realisation –  reducing the environmental impact and waste which catwalk shows and fashion shoots produce. It’s also an amazing solution for remote-working and a technological enhancement, wherein nothing has to be present to realise a fashion shoot or a catwalk shoot.

“What I also like about this ‘collaboration’ between technology and fashion is the responsive ability of the medium to make decisions.

“I have always found plain photography to be a bit silent and less responsive than other disciplines like sculpture. I always find myself as a viewer rather than really present in the image. I suffered from this during my BA, trying to understand why photography was so distant from its creator, and often voyeuristic. With Computer Vision, it’s a different story.

“Coding my result allows me to merge different images into an abstract figure – like I’m working with an AI system. There is a response from the machine, and the more I train the model, the more they start to reflect myself and my taste. I’ve started to understand coding as more of a sculptural practice, where I learn by failure, and learning by failure is at the very core of AI processing.

“For this project, I downloaded images from the GAP website and created a folder, which I processed in a dataset (or generator), and ran against a personal pre-trained model (or discriminator) – this process is also known as Generative Adversarial Networks – then I downloaded the compressed result (the GANs model).

“At this point, I deployed a projector, a process which creates a new synthetic image starting from a random point of the aforementioned model and projecting it against the input image. Then, because the maximum resolution a GAN system synthesises is 1024x1024, I enhanced the result on Photoshop (by recreating details) and reprocessed the images via a superresolution process, which basically generates new synthetic details on the images, making them more realistic.” 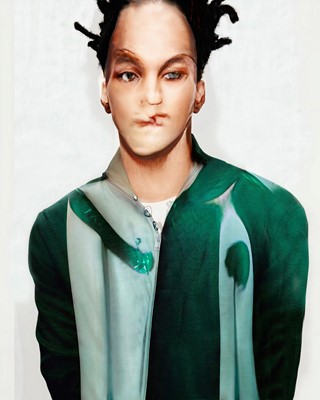 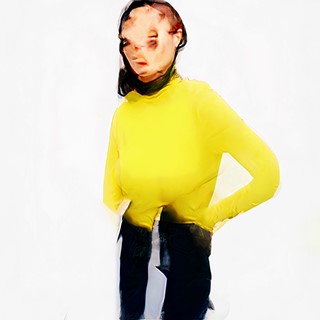 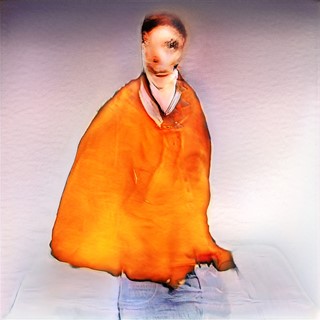 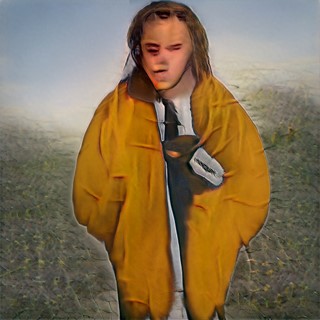 “My project reinterprets the GAP hoodie in a dynamic photo series, designed to display a spectrum of movement, emotion, and expression.

“Each frame has been slightly altered to become distorted – a reflection of the uncertain times we are currently living in, but also to produce imagery which creates conversation around navigating space when faced with personal challenges such as mental health, and how this often leaves us to perform versions of ourselves to survive.

“I casted people who are close to me, all artists in their own right, as, even though a large focus through this project is how our realities have been blurred and altered through things such as mental health and the global challenges we currently are facing, I am facing it with these people and I knew I could only create this authentically with them. The hoodie is illustrative of the shell that holds us together, in our best moments, in our worst, and how important it is to look out for each other, and stick together.” 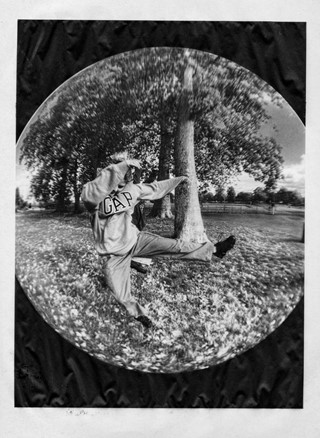 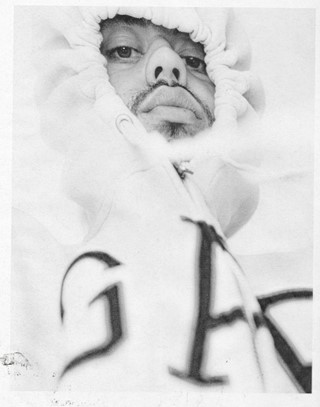 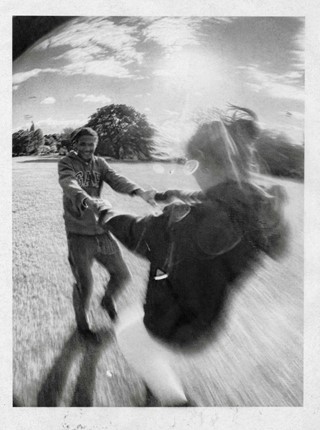 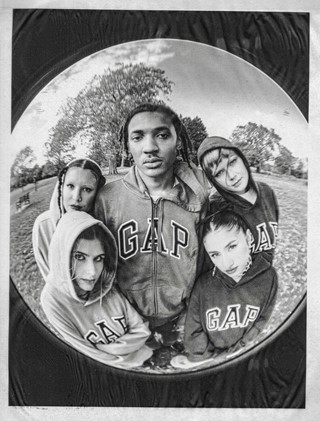 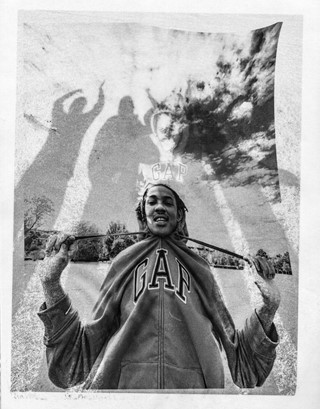 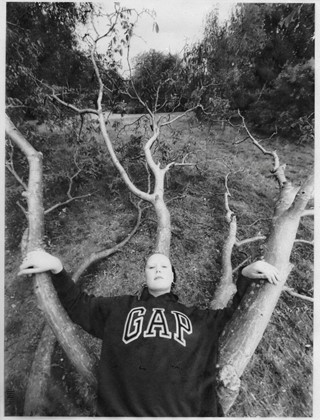 “My recent work has explored the relationship between mind and body, and the experience of Covid-19 inevitably led me to reflect on ideas on mental health and physical wellbeing even further.

“I was inspired recently by some fictional books that explore Igbo cosmology, and I have been thinking about different cultural perspectives on the connect and disconnect between mind and body. In exploring this topic, I have also closely observed the aesthetic of clouds and how they seem symbolic of the fleetingness of the mind.

“This piece focuses on support systems and the vital role they can play in our relationship with our mind and body. The dynamic animations in the video stem from my personal drawings. Their various formations signify a range of different support systems, and their movements show the way interactions and relationships with support systems can affect us in mind and body. I intend for my animations to convey a sense of the different communities that can exist when exploring possible support networks.

“In combining my animations with real footage of my friends, I wanted to juxtapose a physical reality with the virtual reality of the mind. I also wanted the video of my friends to appear relaxed and comfortable, so they are presented as they would normally in daily life. To achieve this, I asked them to choose items of clothing from GAP so that what they were wearing stayed authentic to themselves.

“Friends are a huge part of my support system when I’m  at university. In my video I aim to convey how support systems can have a positive impact on keeping one’s mind and body in harmony.”

“When bringing this piece of work together, the concept of youth plays a big part as it has been a prominent theme in my recent work. I see a lot of good coming out of young people today; what we’ve been building as a creative collective, how we portray our work and convey our ideas is changing our future for the better.

“At the same time, I feel, generally, that there is some lack of self-acceptance in the creative industry – that our work eventually becomes a gateway for escapism and that we merely want to escape from our reality rather than accept it. I think it’s important to embrace our current environment and societal climate since there’s still a lot of hope for the future, yet it’s the individual that has to declare self-acceptance in them to avoid escapism.

“Through my surrounding peers, people I’ve chosen to be in my life, I wanted to showcase how they've been a driving force towards helping me mentally, collectively, and the gradual understanding in the importance of living in the 'now’.” 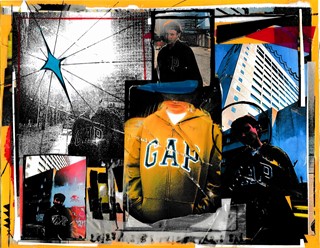 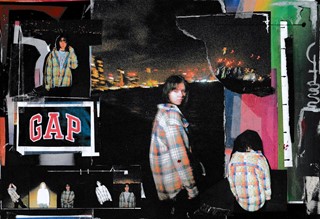