We meet Starboy, the leader of a group of friends who love nothing more than to ride 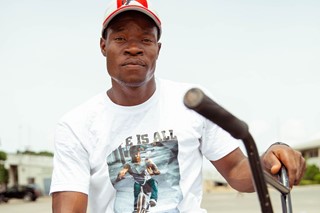 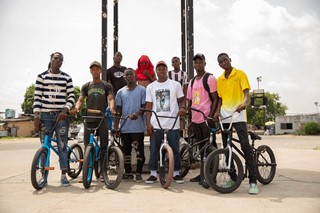 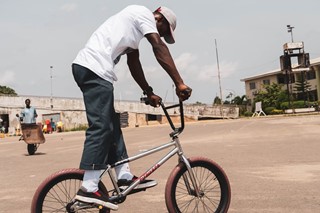 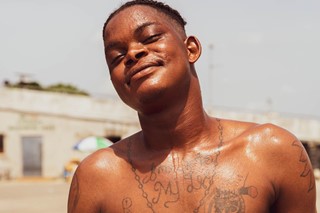 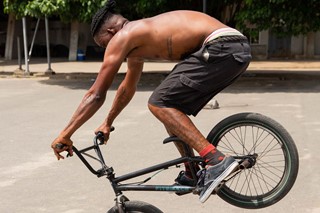 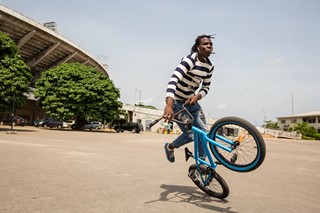 Lagos, a city with more than 23 million inhabitants, knows many traffic jams. Lagosians move around in motorised vehicles; on motorbikes (locally known as Okadas), in a tuk-tuk (locally known as keke) car, (mini) bus or in a big van. The tiny road network is often congested. Daily, eight million people move in five million vehicles, resulting in being stuck in traffic for 30 hours a week. You might think, those cycling through this traffic are mad. We met up with Matthew Temitope Solomon, Starboy BMX, one of the few daring Lagosian cyclists, who turned his hobby into a lifestyle.

“Don’t be late” is the last message Starboy sent to Coco. In a hurry we jump into the Uber, leaving Victoria Island to go to the National Stadium where Starboy and his BMX boys are waiting for us. In the back of the Uber, both Coco and I are dozing off, which the Uber driver uses to his benefit; we arrive 20 minutes late. The driver takes us through the gates on the compound of the stadium, we head right – not knowing where exactly we have to be. The compound is big and there are a lot of people practising some sort of sports. We decide to get out of the Uber and, lucky us, right in front of us we see a group of boys on BMX bikes. “Thanks for coming,” says Starboy as he walks over to us. We join him and walk towards the boys. We greet them. Loud American hip hop blasts out of a portable speaker. Some boys are cycling and practising tricks whilst others are cooling down in the shade.

Starboy wants us to walk to the side, where we can talk about his passion: riding the BMX. We sit in the shade, under a tree. “I bought a new bike because my old one got spoiled, and I accidentally bought a BMX without knowing what it was,” he explains. He thought he had bought an ordinary bike, friends told him what the bike was known and used for. “I started watching clips on YouTube and got inspired,” he adds. The tricks he found there, he started to try out here at the stadium. “We used to gather here to cycle on our regular bikes, so now I come with my BMX and I’m practising these tricks I’ve seen online.” Soon his friends became inspired and they started to look for a BMX too. Now they are with a group of about 25 boys who meet weekly to cycle and show off their tricks.

Coco and I wonder why they would meet here, at the stadium, since we heard that of the boys don’t live nearby; Michael, also known as Mikky Blaze, lives in Iyana, Ipaja. He cycles for over an hour to get to the stadium “This is the best spot to practice – Lagos is crowded and has no space. Here there is space,” Starboy explains. There is space but they can’t cycle without being bothered. “As soon as people from outside are coming to watch us, the security is always worrying us. They want us to leave,” he adds. “They should be happy with us, what we do is good for our health, it’s good for the body. Also, the youth is involved, they are here and are not messing about.” Coco and I agree: the boys look extremely fit, they are cracking jokes, the atmosphere is chilled, and everybody seems to have a good time cycling. Despite it being a somewhat dangerous sport

“Not everybody has health insurance,” Starboy continues. “So not all parents are supportive.” Not too long ago the parents of one boy prohibited him to go cycle, Starboy says, “I haven’t seen him since.” Coco and I understood the boy’s parents; we have health insurance that covers most of the cost of surgery or a hospital visit. In Lagos, not everybody has it, which means you have to pay for your attendance. Starboy’s parents weren’t happy with him cycling, but now they are supportive: “They see I make some money with it, so they do like it now.” He’s often asked to perform in videoclips and Red Bull is making a documentary about them. Starboy turned his passion somehow into a business. “I recently stopped working,” he says. “I was working with my dad who is a car engineer. My dad allowed me to quit because he sees I’m making money through cycling.”

The afternoon we meet with Starboy he is also filming with a European documentary maker. While he is getting credit for his work with European platforms and people like us, the local government is not supporting him. “They think we are causing problems in the neighbourhood because we are a group of boys that are hanging here at the stadium together, but we are constructive and doing everything but that,” he says. “This is just the best place to cycle at!”. Starboy talks about the dream of having a skatepark in Lagos. “Here at the back of the stadium would be amazing, there is a lot of empty space that’s not in use.”

Two boys arrive on a motorbike. They stop and park the bike on the side. Some boys are discussing something and soon they start moving the bike, putting it next to the little plateau on which we’re all chatting – the BMX boys are going to jump over it. They all grab their BMX and create a queue. Coco and I watch from a small distance. The owner of the bike seems relaxed and not worried about this bike being damaged. One of the boys, Taiwo, walks around and shoots some clips of it on his phone. He has covered his face with his football jersey – the cute boy transforms into a tough-looking cool kid with his chest out. Coco pulls out her camera and starts taking pictures of the boys and their tricks. The boys like the camera and start to circle around her on their bikes, trying to show off. Some stop cycling and pose for her.

After some 15 minutes of taking pictures, Starboy walks up to us. He has to go to his next appointment. He jumps on his BMX and leaves. The boys soon follow him, also on their BMX bikes. Only Taiwo sticks around and he walks next to us, holding his shirt in his right hand “My BMX is broken,” he says.