The artist speaks to us about living in Berlin, falling in love, and the Wong Kar-wai film that inspired her 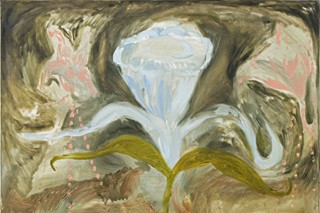 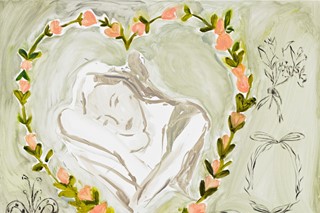 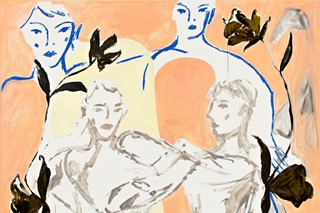 It was summertime in Berlin that 25-year-old artist Faye Wei Wei fell in love. “It's infinitely inspiring to be in love,” she tells me. “Every morning I walk to the canal and feel my eyes refresh on that sparkle of the water.” The London-based painter, who’s known for her towering, large-scale canvases, spent six months in Berlin, living in her studio near Potsdamer Platz, passing her time walking down the banks of the city’s canals, or, in her own words, “cocooning” herself in her studio, where “the light turns to gold and slips into the room like a warm bowl of soup”.

If you’ve been following Wei Wei for a while, you’ll know that her work has long been steeped in poeticism, and her latest exhibition, I've Always Been A Weeper At The Cinema, at London’s Cob Gallery, is no different. Pastel-coloured roses bleed into green backdrops, peppered with pink polka dots; a naked body cradles a skeletal figure under a wreath of flowers; a woman looking longingly out of a floral, heart-shaped frame, surrounded by her lover’s iconography. “I can't help but paint the people I love. I think they have become characters in a play. In my exhibition, we curated the large scale paintings hung quite close to one another, in this sense they almost become like a backdrop to a play, there's something theatrical about the space when they inhabit it in this way,” she says.

Looking at one of Wei Wei’s images feels like peering into her personal diary, with each canvas conjuring memories and references bound to a particular moment of time.  Her painting, “For Ana Mendieta (How Much Can A Flower Break You)”, for instance, is a tribute to late Cuban artist of the same name, whose work “On Giving Life” (1975) of a naked woman photographed with a study skeleton, is a direct reference to Wei Wei’s work. “Ana’s work is so powerful yet soft, the colour, her colour red bleeds into everything around you as you’re surrounded completely muffled by her work,” she explains, before adding: “I first saw her work at Martin Gropius-bau in Berlin, it was the first date I went on with my ex who I still love intensely but differently. All her work felt intensified to me because I was falling in love with someone.”

In another painting, “Dancing In The Palm Of The Sea”, two figures embrace in a blush of yellows and greens. It’s a direct reference to a scene in Chinese director Wong Kar-wai’s 1997 film, Happy Together, where the two main characters – two men embroiled in a turbulent romance – dance together in a kitchen. “It’s incredibly moving, I find that film very close to my heart in the language of my mother's mother tongue, cantonese,” says Wei Wei, before pointing to a poem written by her brother and herself about the film that reads: “Two Boys fall/ over and over each other/ trying to find the waterfall they once saw/ not so sure if/they’ve seen it before.”

With the sheer size of her paintings, it’s hard not to find yourself sucked into Wei Wei’s personal dreamscape, spun together with the artist’s own phenomenology, or lived experiences – they are, after all, expressions of the world that draws from the life and art around her. Yet it’s within the artwork’s unabashedly romantic style that you find a rawness and honestly that’s refreshingly open, and it’s this quality that makes them so magnetic.