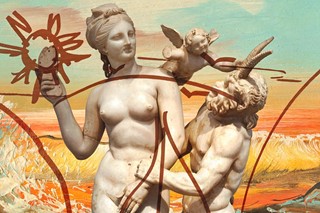 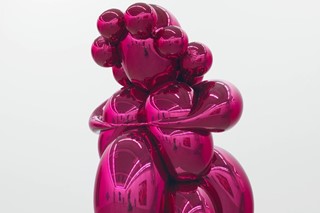 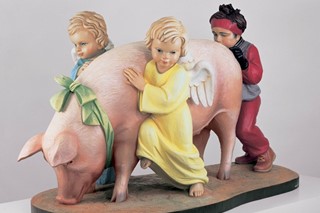 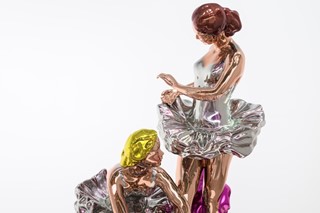 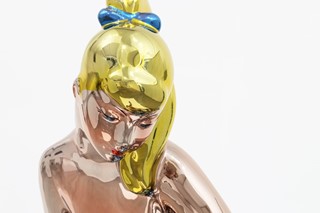 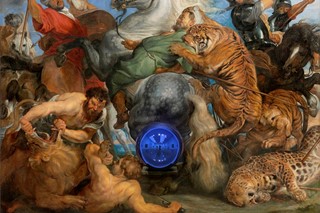 Silly, audacious, expensive, vacuous: these are the kind of descriptors frequently attached to the name Jeff Koons. A figure shunned by critics and the public alike, he has been called “repulsive” by art writer Rosalind Krauss, while Yves-Alain Bois used the word “crude”. For many he is representative of a society consumed by late capitalism; evidence of an art world that has lost the run of itself.

Not long ago, I hated Koons for all the reasons stated above. However, in spring 2017, while passing New York’s Rockefeller Plaza, I was struck by the sight of “Seated Ballerina” (2017), a huge 45-foot inflatable nylon sculpture. It was undoubtedly a Koons, but my reaction was surprising; I was moved. In a city where busy-ness is a measure of success, the ballerina’s idle state, sat in calm contemplation amongst Manhattan’s rat race, felt like an act of rebellion. The sculpture was imbued with a self-acceptance that I had never before realised in Koons’s work.

This idea of acceptance is indeed central to the artist’s oeuvre – the balloon inflatables, the gazing balls, and the floating basketball are, according to Koons, all “self-affirming”. And, earlier this month, it was all brought to the Ashmolean Museum in Oxford, along with the man himself, for the artist’s largest UK retrospective, which includes 17 of his career-defining works. “The way we find transcendence”, he addresses the crowd of journalists at the press preview, “is by giving ourselves up to something else.” It feels a bit like we’ve stumbled upon some sort of trippy sermon at an ayahuasca retreat. Except this is the world’s oldest public museum and we are listening to one of culture’s most iconoclastic artists. His cosmic language might be concerning, if it wasn’t the same spiel he has been toting out since his career began in the 80s. Koons has long claimed that he can relieve us of our shame through his artworks. “Art can change your life, it can expand your parameters,” he explains in a BBC documentary. “You know, ‘I am what I am.’ That’s one of the things my art tries to communicate to people, that you’re perfect.”

The first of three rooms at the exhibition holds two of his most famous works, “One Ball Total Equilibrium” (1985) and “Rabbit” (1986), which sit across from each other as if in dialogue. According to the Museum Director, Xa Sturgis, the basketball suspended in a vitrine of fluid (“One Ball Total Equilibrium”, 1985) is representative of life in the womb, and is in contrast to the sexually charged masculine energy of the stainless steel silver male bunny (“Rabbit”, 1986) across from it. Koons often talks of his desire to convey a sense of childlike wonder in the object world through his art. He has succeeded here. Both are undeniably enthralling, the steel rabbit notable for its impressive level of detail, making it look just like the cheap inflatable it is modelled on.

The second room holds Koons’s Antiquity, a series of sexually charged paintings which layer images of classical sculptures with modernist works. Ancient Greek female nudes are scribbled over with double entendres of sailboats that could also be vaginas. Elsewhere, Bettie Page rides across a canvas atop an inflatable dolphin. It’s totally bizarre but visually stimulating. You can’t help but stare.

The “Balloon Venus (Magenta)” (2008-12), a bulbous, imposing pink creation, cuts a maternal figure in the centre of the room – inspired by a Stone Age fertility statuette called the “Venus of Willendorf”. Similarly “Ballerinas” (2010-14) is a reproduction of a porcelain figurine of two dancers. The idea being that by transforming these fragile objects into indomitable creations, Koons is demonstrating an abstract symbol of transcendence. A smaller iteration of the aforementioned “Seated Ballerina” (2017) is here too, though she packs less of a punch in the elegant surroundings of the Ashmolean, where her contemplative state feels too at home to rouse any emotional reaction, as before.

On the show’s signage, Koons describes stainless steel as “pure sex”. In an interview with David Sylvester, the artist once described the childhood pleasure of looking at a cereal box as a “kind of sexual experience”. The art critic Hal Foster pointed to this anecdote as evidence of “a boy preciously alert to the sexuality incited by consumerism”. This begs the question, how much of our expression of sexuality is learned, and how much of it is engineered? I look again at Koons’ painting of Bettie Page and wonder, is this sex? The answer, I think, is yes. But the question I suspect Koons is trying to raise is, would it still be sex if we weren’t programmed to know it was sex?

The final room of the exhibition focuses on Koons’s Gazing Balls series and the idea of cultural DNA. Koons claims that culture is as inherent to our make-up as our genes. Here, he presents reproductions of iconic artworks from the western canon. Reflective gazing balls are placed in front of the paintings, allowing us to see ourselves in the canon of art history. “He wants to manifest the wonder of the world we find ourselves in,” co-curator Norman Rosenthal muses, standing in front of one of the blue globes. The spheres are inspired by the gazing balls used popularly as a garden feature in suburban America which Koons recalls from his childhood in Pennsylvania. Echoing one of his major influences, Marcel Duchamp, Koons elevates these everyday objects to a higher plain by exhibiting them here alongside canonical reproductions. Their mesmeric quality when exhibited here demonstrate the artist’s uncanny ability to instill ordinary objects with totemic qualities.

Like the mirror-polished stainless steel sculptures, these gazing balls are reflective, so as to include the viewer in the work. According to Koons, these reflections are an affirmation of us. One has to wonder though, maybe we have enough affirmations of ourselves? With selfies and multiple social media profiles, we have never had more ways to remind ourselves that we exist. And yet we are still hungry for more. Take for example, when two of Yayoi Kusama’s infinity rooms were exhibited at the David Zwirner gallery in New York in 2017. Visitors queued around the block for hours, just to catch a glimpse of their own reflection and capture that prized selfie with its guaranteed Instagram likes.

That said, both Koons and Kusama were employing reflective properties in their art long before we all became so obsessed with ourselves. Mirrors have featured heavily in Koons’s work since the beginning: from the first cheap inflatables he made in 1978, which he placed on mirror platforms, to his more recent mirror-polished sculptures, finished with such a high shine that viewers can’t not see themselves in the artwork. Koons has said he uses reflective surfaces because it “lets you know that art is happening inside you”. Today, we need to further affirm this experience by not only capturing it on our phones, but posting it to social media where we can garner even more validation. Each notification serves as a little reminder we exist, and it would seem we are becoming addicted to them. When it’s almost impossible for the viewer to resist taking out their phone to capture an image of themselves in the artwork, one does wonder if whatever powers these mirror-works might have once possessed are now at the mercy of our iPhones.

Koons isn’t to everyone’s taste, but there’s at least a case to be made against the broad perception of his work as “vacuous”. So why does such an impression exist, and why do people seem to hate him so much?

Koons was once ground-breaking. In the early 80s, he caught the attention of the art world with a series titled The New (1980), which featured store-bought vacuum cleaners encased in fluorescent vitrines. The works garnered some attention from New York art dealers like Mary Boone and Anina Nosei, but these relationships soon fizzled. It wasn’t until his first one-man show in 1985 exhibiting his Equilibrium series (including “One Ball Total Equilibrium”) that people really took notice. In the years that followed, Koons began working with stainless steel and soon became the centre of the art world. His works were selling for tens of thousands to titans like Charles Saatchi and critics were fascinated. Reviewing his Statuary pieces in 1986, the New York Times critic Roberta Smith praised the artist for “creating works of a strange disembodied beauty that expand our notion of what sculpture means.”

As ever, sex sells. The exhibition was packed out for months with a shamelessly eager public, but the critics blasted him. Koons quickly became a pariah in the art world. It wasn’t until years later when he completed his Celebrations series (after it nearly bankrupted him) that he regained his footing. Still though, while his works now sell for more than ever, his career has never fully recovered in critical terms. Saltz noted that Koons hasn’t been in a Whitney Biennial or Documenta since, two events seen as a mark of legitimacy for an artist to be included.

The critics have their reasons. Fair enough. But for those less concerned by the “hoity toity” whims of the art world – what’s their beef? Does it annoy people that he’s rich and successful – or is it because the Kardashians like him? Maybe people love to hate on Koons because he goes against everything we think an artist is supposed to be. We expect artists to rebel, to take the moral higher ground, to expose and challenge inequality and power structures. Today that means making work that is in opposition to capitalism. Instead, Koons accepts it; encourages it, even. For this reason, many have likened him to Andy Warhol, who said Pop was about “liking things”. Like Warhol, Koons’s hyperbolic tendencies can be read as an artistic means of exposing “the kitsch emptiness of culture”, as Jonathan Jones called it. But then again, maybe he just really likes money.

While Koons’s cosiness with neoliberalism doesn’t sit comfortably with many, it remains difficult to completely dismiss his work. The man may use the word “transcendence” a little too liberally for my liking, but on some level, I get what he means. There are junctures in this exhibition at the Ashmolean Museum where one might find themselves falling down a contemplative rabbit hole or momentarily filled with wonder. There’s no question that the work demands the viewer’s attention, and there is a presence in that. If this is what Koons means by transcendence, then in my opinion he has achieved it here on some level.

It feels too easy to simply hate Jeff Koons’s work, but there’s an uncertainty in liking it too. One thing about Koons is that his self-belief never falters. His character never breaks. This idea of acceptance is a message that he has reinforced in countless interviews across his career. Then again, there's something creepily Truman Show-esque about his unwavering optimism, which leaves the viewer wondering whether it's all a façade or not. In many ways, he mirrors the worst qualities of the artwork: the unsettling perfection, the brashness, the extravagance, the emptiness. His work champions self-acceptance, yet he is the embodiment of the American Dream where happiness is a moral obligation, self-betterment, a duty. Just like his artworks, it’s difficult – intentionally so, it seems – to tell if he's full of air, or in fact completely solid.

Jeff Koons at the Ashmolean is running until 9 June. You can find out more here