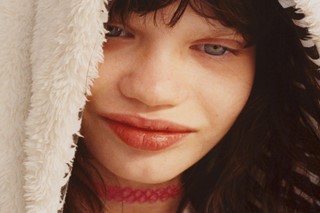 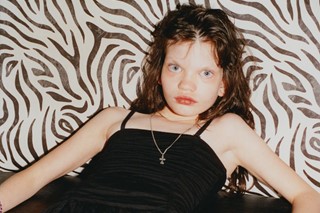 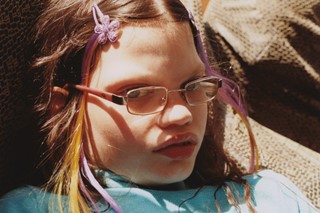 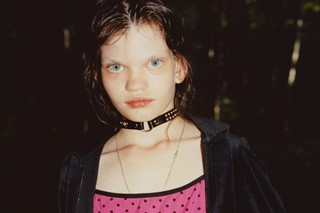 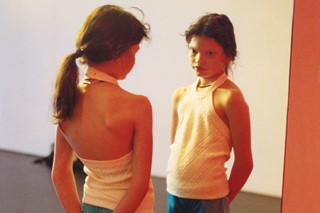 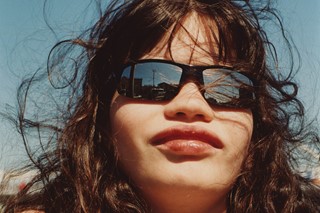 The fleeting gap between our childhood and our teens is a haze of self-discovery. Emotions and experiences feel alien and otherworldly as we race into a coming of age, trying to figure out who we are, and who we’re going to become. Channelling this transience is LA-based photographic duo, and regular Dazed contributors, Hart Lëshkina – AKA Tati and Erik – whose latest book Out Of You tackles themes of self–representation and the construction of identity. Featuring 10-year-old Ukranian model Uli, the book is a supercut of images which see her morph from child to teen, and back again throughout the book’s pages.

Uli was chosen specifically because of her unique ability present as different ages. The images are personal – like flipping through a family photo album – but in fact, they are entirely constructed by the photographers. At points, she stares into the camera with piercing intensity, while in others she can be seen patiently studying herself in a mirror or admiring the sun. We also see her undertaking swimming lessons and experimenting with coloured hair extensions.

Below, we catch up with the duo about their new book, the way that they found their “ageless” model, and their future plans.

When did you first meet Uli, and why did you decide she was going to become the subject of a whole book?

Hart Lëshkina: In Out Of You we wanted to explore themes of self–representation, memory, subjectivity, and the construction of identity during the time of transition between childhood and adolescence. The moment when one becomes aware of being viewed and how this often catalyses the way in which one presents themselves. The images are an exploration of potential selves. The varying clothing and hairstyle references, this identity in flux and forging of the self alludes to the passage of time. It was by chance about a year ago that we came across a picture of this young girl on Instagram. We were immediately taken by her presence and ability to embody a range of ages depending on how she was presented in the photographs taken by her mother. We knew that we could create this project with her as our subject. While she’s in all the images in the book and integral to its creation, it is not about her personally, she’s performing and interpreting a constructed role directed by us for the camera.

The book feels very personal, would you say there’s a sense of your own childhood in here?

Hart Lëshkina: It was intentional that the work feels personal, in many ways, the images have characteristics of snapshots which carry aesthetic associations of authenticity, intimacy, and vulnerability. It was important to us that the viewer feels almost as if they are sharing a space with the subject and that she is confronting the viewer – that you are in her world. While the surface of the images feels like candid snapshots, this is in direct contrast to the actual highly constructed nature of each image. The project is personal to us both in the sense that the images became a vessel for creating and recalling interpretations of past experiences or situations. At times, it almost gave us the ability of imagining photographs of ourselves which were never taken.

You previously mentioned your desires for the reader to continue to interpret and reinterpret the narrative, why is this important to you?

Hart Lëshkina: It comes from the desire to create something that’s multi-layered, that can’t be resolved, defined, and compartmentalised just at a first glance. The element of subjectivity is something that we always find important and try to allow for this space in the work. The book is structured in a way that’s like a fractured narrative, with the viewer not being aware of what preceded or followed each moment. These spaces are consciously left blank to simulate fragmented recollections and memories. This idea of the process of recollection informed the image sequencing of the book. We hope that these gaps prompt the viewer to project their own perceptions, experiences, and views into these voids.

Can you tell us why you decided to name it Out of You?

Hart Lëshkina: The title functions in multiple ways. Its meaning is in reference to the emotions, thoughts, and constructions we carry within us, which are both consciously and unconsciously outwardly communicated through ever-evolving visual codes which we project in the forms of self-representation and visual identity. These encompass both aesthetic choices (clothing, make-up, hairstyles etc.) and more nuanced projections which manifest in the way someone carries themselves, their vocal inflections, a scent one wears, the energy they emit. Out of You also alludes to the idea of transcending and getting outside oneself.

What is next for you both in terms of personal projects?

Hart Lëshkina: We are currently working on developing a film, in addition to a new photographic body of work which will be released by the beginning of summer 2019.