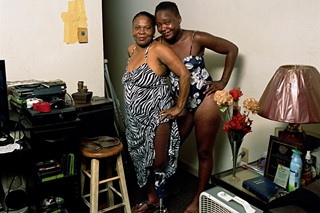 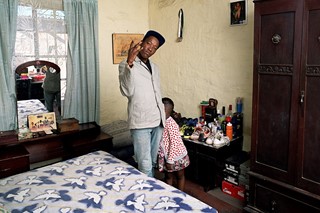 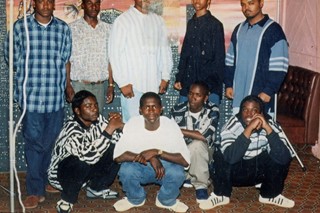 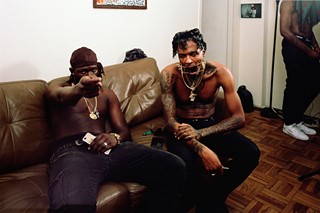 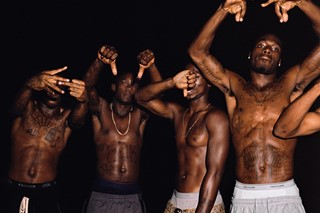 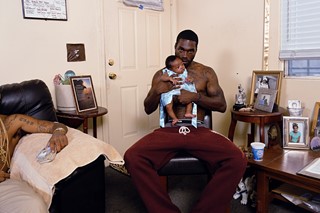 Born in 1979 in Rochester, New York, photographer Deana Lawson has a prophetic origin story. The city was famously the birthplace of Kodak, and Lawson’s grandmother cleaned the home of its founder George Eastman, whereas her mother worked as an administrative assistant in its offices.

Lawson’s photographs are remarkable for their intimacy. Often naked or semi-undressed, her subjects pose in domestic spaces; in kitchens, living rooms, and bedrooms. Although she uses settings more readily associated with documentary photography, for the most part, her images are highly staged. To each shoot, she brings bags of props (she has described the thrift store as part of her process), things heavy with associations, to compose arrangements in which each object has a significance akin to a still life painting.

Her work is concerned with the black experience across the diaspora – as well as US states such as New York, North Carolina, and Louisiana, she has travelled to the Caribbean and Africa, enabled by winning the Guggenheim Fellowship in 2013. One of Lawson’s hallmarks is the directness of her subject’s gaze. Her people are regal, in the sense that they possess a dignity and authority, maybe an aura, that’s hard to reckon with, or articulate. In a conversation with the filmmaker Arthur Jafa in the recently published Deana Lawson: An Aperture Monograph, Lawson said, “People are creative, god-like beings. I don’t feel like we carry ourselves like that all the time, or that we know how miraculous we are.”

Deana Lawson: Planes at The Underground Museum, LA, comes out of Lawson’s close relationship with the gallery. In 2009, as juror of an art prize, its co-founder, the late Noah Davis, was particularly struck by Lawson’s work, “which combined a painter’s sense for spatial composition with an ethnographer's curiosity of the human condition”. Since The Underground Museum’s inception in 2012, two of Lawson’s works have hung in the space. As Megan Steinman, its director, told me over the phone: “Deana, as an artist, represents so much of the ethos of The Underground Museum, in the rigour, the aesthetic quality, and the mastery of her craft… that kind of rigour that could intercept and be so essential to the lives of the audience members that come into contact with it. (For The Underground Museum) Deana is family.”

In honour of Planes, we take a closer look at several works that feature in the show.

“People are creative, god-like beings. I don’t feel like we carry ourselves like that all the time, or that we know how miraculous we are” – Deana Lawson

“Kings” is a found photograph, an image that Lawson carried around in her journal for several years – it’s cut across the top, along the seam from where she had folded the original. Lawson has a long-established practice of collecting found imagery, at a recent panel in Miami for No Commission, an exhibition which features her work, she spoke of how she was inspired by an image of the photographer Diane Arbus against a wall of photos, “I (thought) I need to start putting images up in my studio just for reference, or kind of just this subconscious ether which I pull from… so I started going to the New York Public Library and would just search random topics, like Harlem Renaissance, or gangs, or Haiti, Hoodoo, whatever, and just scan images, just scan, scan, scan, print everything out at Walgreens.”

In Planes, there are collages that spread out from the corners of the rooms, unframed images pinned directly to the wall. Steinman says that these mirror what Lawson does in her own studio: “They are studies on what the diaspora might contain… (they’re) not only historical, (but) very emotional too… those installations are really meant to represent the breadth and depth of the diaspora, and what could be defined as a black universal experience, if one could even try to think about that.”

Lawson has a particular knack for persuading strangers to drop their guard. In her conversation with Jafa, she talked about discovering the people she photographs with the kind of language often used to describe falling in love: “it feels like time stops… these are moments when my rhythm of time ruptures.” She finds her subjects on the subway, in nightclubs, churches, beauty supply places, and fried-chicken shops.

In the case of Barbara and her mother, they met in a corner store in New York. Lawson was fascinated by Barbara’s mother’s prosthetic leg, in the photograph a thin-stemmed vase of flowers on the table mimics the leg in its proportions, framing it. The ‘skin’ of the prosthetic leg is compelling, the contrast of the upper thigh against the nearly-green foot, and the foot’s chipped red nail varnish, matching that of Barbara’s foot behind it.

Lawson has a painterly understanding of colour and composition. Here, the woman is posed in what Steinman described as, “that quintessential Lawson corner”. On the towel laid out beneath her signifiers of family life are scattered remote controls, car keys, and a unicorn toy, as if, Steinman describes, “a child ran up to her, and was like, you know, ‘Look at this!’” Curtains recur in Lawson’s work; net curtains, thin, and translucent curtains, curtains which sag in the gaps between their hooks. Here, heavy lavender pink and tight against the cornice, they are drawn, and the family photos are turned to face away from her, implying a stolen moment of privacy. The exhibition’s title makes reference to multidimensional planes, the idea that time and space can be connected through photographs. The woman occupies this space in a way that’s reminiscent of “Nicole”, a connection that collapses the distance between Nicole in LA and this woman in Soweto.

Uncle Mack leans back, and there’s a gentleness to his expression that seems to contradict the shotgun, to disarm it. It’s held defensively, across his chest, rather than directed. As with “Soweto Queen” he’s against a corner, here, the family portrait hanging behind him signals that it is his corner, his patch. Of this photograph, Steinman spoke of Lawson’s ability to engender empathy, to transmute an image of a man holding a gun into a tender portrayal of family love and protection. Family is an ongoing theme in Lawson’s work, discussing this in Miami, Lawson said, “I think my ideas about family are inspired by this sort of fractured family within the diaspora. You know, mass incarceration, and I think about the division of family being used as a tool for white supremacy, so in some ways, my images are affirming black family, and black connectedness.”

In a borrowed Lower East Side apartment with a ubiquitous parquet floor and brown leather sofa, two men are seated, shirts off to reveal muscular, tattooed bodies. The first points directly at the viewer, as if to draw our attention, but it’s the second man, on the right, who commands it, who becomes the photograph’s focal figure. His hair a shock of gleaming ringlets, his eyes roll back into his head as his mouth is prised open by a futuristic apparatus, an orthodontic guide that Lawson spray-painted gold.

In the upper right of the frame, obscuring the face of a third man, there is a postcard-sized print, an image of George Washington’s last surviving set of dentures. Now on permanent display in Mount Vernon, Washington’s former plantation, the dentures were created using the teeth of animals and sometimes humans; Washington is said to have bought nine teeth from slaves. The print confirms the horror, the action of torture, implied by the headpiece.