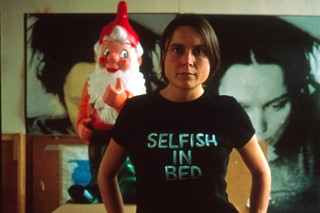 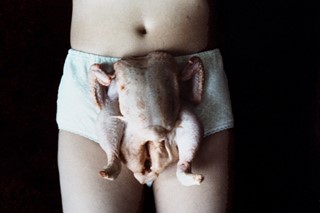 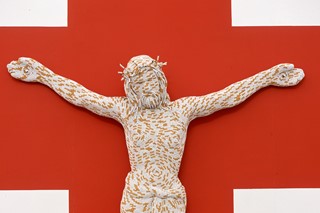 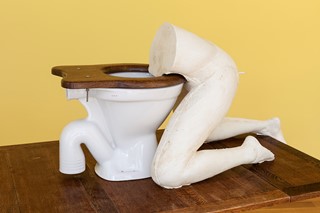 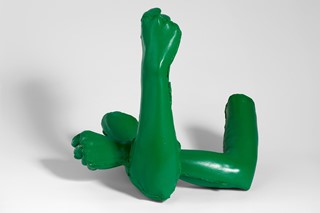 Sarah Lucas grew up as one of four siblings on a council estate in Islington, London. She studied at Goldsmiths where she met the artists – among them Damien Hirst, Tracy Emin, and Angus Fairhurst – who later became known as the Young British Artists or YBAs. While some of the other (male) members of the group received uproarious early media attention, Lucas developed her craft surely but relatively quietly.

While she is a multimedia artist, dealing in sculpture, video, collage, and photography, several tropes recur in her work across the disciplinary lines. Objects and food act as psychoanalytic stand-ins for genitalia, cigarettes, toilets, and excrement are used for their shock value, but without being too self-serious. Lucas’ work is often described as ‘macho’, a fair evaluation for the no-nonsense attitude her pieces maintain vis á vis the phallus, but it is also ignoring the fact that the femininity she portrays is dominant on its own terms. Aware of the patriarchy, but refusing to play by its rules.

Speaking to curator Massimiliano Gioni at the New Museum two days after the opening of her first US retrospective, Sarah Lucas: Au Naturel, Lucas stated that her early art focused on getting away from the idea of “being right” and “having no style at all”, a reaction against many of her Goldsmiths peers styling their work after artists they looked up to. Whether consciously or not though, Lucas’ style, combining the Surrealist tradition of found materials and deconstructed sexual imagery with quintessentially British humour and a new feminist sensibility came to define the UK art scene of the 90s and beyond.

Lucas resists labels – as she emphasised to Gioni, she doesn’t consider herself a “working class artist” any more than a “British artist” or a “feminist artist”, although, it is “hard to take that out of it”. But, as she also stated in a New York Times interview, she “like(s) things to make sense to plebes like myself”. If Sarah Lucas’ art is testament to anything, it’s that the accessibility can sometimes be the most radical.

Lucas lifted “Fat, Forty and Fabulous”, an enlarged, unaltered photocopy of a real-life feature, from the now-defunct British tabloid magazine, Sunday Sport. The piece appeared in Lucas’ first solo show, Penis Nailed to Board, which like “Fat Forty and Fabulous” took its title from a tabloid news item about a group of men running a sadomasochistic sex ring. Lucas has stated that although she did not set out to specifically make feminist art, she realised after leaving Goldsmiths that she needed to “mobilise this thing that’s being a woman”. “Fat Forty and Fabulous” lays bare the tabloid’s glaring misogyny and draws attention to the language which, while the words alone might be empowering, loses all meaning when juxtaposed with an objectifying image of a fat naked woman. This kind of play on language and graphic imagery became integral to Lucas’ work later and defined a new generation of feminist artists relying on humour to draw attention to the inherent sexism of our visual environment.

In 1990, Lucas travelled to Rome with her then-partner Gary Hume, where, sitting at a small table in their garden, Hume filmed Lucas methodically cut up a sausage, then abanana, served to her by a shirtless Hume. Lucas displays no emotion throughout this, pleasure or otherwise, her composure is only broken once when she can’t help bursting out in laughter. While the video is not one of her blockbuster works, the rest of her oeuvre could almost be condensed into this one piece. The phallus is ever-present in Lucas’ work – it’s not valorised, nor is it demeaned, it is simply a ubiquitous blank canvas, like the interchangeable female nude in the rest of the artistic tradition. It’s not explicitly a joke, but it’s hard not to crack a laugh at its supposed dominance, at least a little.

Lucas made “Two Fried Eggs and a Kebab” in 1992, for an exhibition entitled The Whole Joke, which was presented in an empty storefront on Kingly Street, London. Exactly as the title says, the piece presents two fried eggs and a kebab (that Lucas replaced afresh every morning) arranged on a wooden dining table, to resemble the outline of the female body, or at least the features – breasts, vagina – it’s most often reduced to. The piece was exhibited alongside “The Old Couple”, two chairs with a pair of false teeth and a wax penis mounted on it. Together they marked the first of many works where Lucas superimposed sexual meaning onto domestic furniture. Evoking the body through its broken down parts and turning the sensual into the absurd, even vulgar, through association with everyday foods also placed Lucas firmly in the surrealist tradition, all-the-while ensuring that women and their sexuality are the focus, but not a spectacle.

From the 1990s onwards, Lucas created an ongoing series of photographic “self-portraits” – though the genre is a slight misnomer as the images, while they feature Lucas as their subject, were all taken by someone else, usually a romantic partner. The photographs depict Lucas looking directly into the camera, completely at ease, somewhere between defiant and provocatively masculine – though, like all labels, Lucas is hesitant about calling the photographs explicitly transgressive. “I mean, people find that tricky,” she said at her talk at the New Museum, spreading her legs and slouching in her chair with a coy laugh, as if saying, “not everything is so serious”. Like toilets, cigarettes, and phallic food, eggs are also a recurring symbol in Lucas’ work, an allusion to fertility and, by their placement as much as their function, to femininity – it’s “Two Fried Eggs and a Kebab”, tilted vertically. Whether Lucas intended it a feminist statement is beside the point. Juxtaposing the masquerade of femininity with the provocative masculinity of her stance creates an ambiguity, then leaves it unanswered.

In 2008, Lucas moved from London to the Suffolk countryside. The rural setting posed a challenge for the artist who’s built her practice on the found materials that an urban city provides, like the beat-up mattress, and cast iron bucket in “Au Naturel” (1994). In “Penetralia”, Lucas combines the natural materials provided by her agrarian environment – twigs, tree trunks – with plaster casts of her partner, Julian Simmons’ genitalia. “Penetralia” was new ground for Lucas; both more collaborative and more introspective than before. She draws a direct line between the natural world and the human body, but, the only man-made thing among the relics of nature, the plaster penises also take on a looming presence and indestructible artefact of masculinity.

On the 13th of September 2018, Lucas invited women (men were allowed to attend in drag or dressed as giant phalluses) to participate in a performance piece throwing one thousand eggs against a blank wall in the New Museum. Previous iterations of the piece had taken place in Berlin in 2017 and Mexico City in 2018, both staged around Easter, alluding to a medieval tradition symbolising rebirth in spring. But, in 2018, women taking in their own hands then destroying the symbol of reproduction holds a different connotation too, one about purpose and ownership over our bodies, at a time when each new day seems to present a new affront to female agency.