Made up of hundreds of Hollywood film clips that depict time in real-time as it plays, Christian Marclay’s ‘The Clock’ returns to London 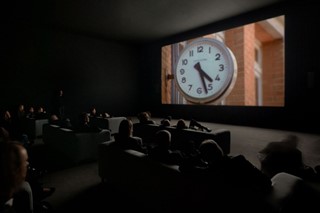 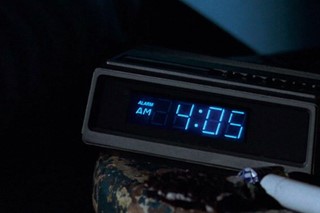 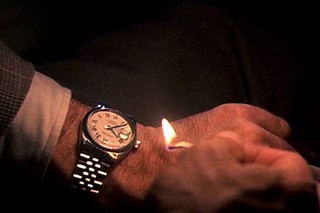 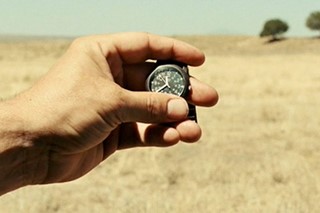 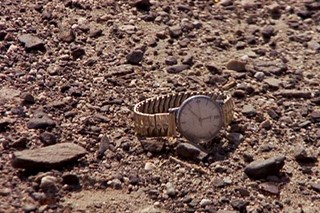 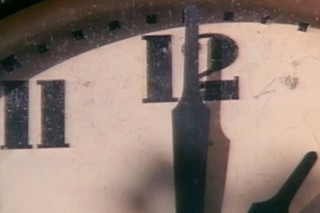 Walking up to the Tate Modern’s Blavatnik extension, you would be excused for finding your eyes wandering away from the 10ft high exhibition posters, and into the rooms of the Neo Bankside building. Sitting between the famous concrete walls of what used to be Bankside Power station and Herzog and de Meuron’s 2016 addition, the Neo Bankside building is a voyeur’s dream.

With wrap around glass windows and in close proximity to the Tate’s eight floors, visitors are able to gaze at art not only within the confines of the gallery but into the multi-million-pound apartments of the Neo Bankside residents next door. The act of looking is inescapable, the thrill of peering into the lives of others only amplified by the irony of being able to do this from the inside looking out of an art museum. “Maybe there’s a similar kind of voyeurism in my work,” suggests Christian Marclay as he sits on the eighth floor of the Tate, surrounded by a panoramic view that gazes across the city landscape.

After eight years on tour, Marclay is finally bringing “The Clock” (2010) back to London. It’s a homecoming of sorts, and one that many have been waiting for. Completed in 2010 and first shown at the White Cube, Christian Marclay’s “The Clock” is a mind-bending act of ambition and detail. Colossal in scale, it is a wonder it was ever completed at all.

To speak in such sweeping terms of any artwork would be to edge perilously close to fawning over-appreciation, yet the scale of “The Clock” is one that warrants it’s almost cult-like following across the art world. Consisting of movie clips spliced together, all featuring a clock or referencing time, viewers are able to watch in real time as 24 hours (and crucially, 1440 minutes) are depicted on screen and in sequence. In a darkened room at 9:24 am, those that sit and watch “The Clock” will find a film scene that depicts the exact moment when the camera panned away to reveal a clock face reading the time, 9:24 am. It’s a dangerously brilliant concept and by-and-large seemingly impossible to make.

First conceived in 2005 and then Initially raised as a concept to The White Cube in 2007, it took a task force of various assistants in a small studio in Clerkenwell to amble through 100 years of film history in an attempt to bring the piece together. It was a droll and exhausting experience for Marclay, a man used to the scratching and mixing of records and a former mainstay of the avant-garde New York music scene. It’s a side to him that Marclay’s clearly passionate about, his tall frame and considered way of speaking becoming animated when discussing the complexities of harvesting electronic sound. Old photos of Marclay at venues such as Hallwalls in Buffalo, NY, depict him behind the decks, his minimalist buttoned-up aesthetic at odds with the radical and experimental nature of the sound he was developing.

Painstakingly cutting out samples of film and arduously flicking through movie after movie, Marclay and his assistants would compile spreadsheets, tabbed and listed so that each second and minute was marked out and planned accordingly. It’s the perverse collision of art making meets office job. “Editing is terrible,” Marclay confirms.

Despite the unglamorous processes that went into the stitching together of “The Clock”, echoes from Marclay’s earlier work ring true.

Traditional collage making of the likes of artists such as Hannah Höch or Richard Hamilton – whose mediums were material rather than movies – are reconfigured for the digital age. Instead, Marclay’s former sampling of dance genres in the clubs of NYC is swapped for the uncanny and carefully synced sequences of film. “It’s the sync that makes you want to keep going, to continue doing something so laborious,” Marclay explains.”You get that powerful hit of satisfaction when two clips flow or when the music is synchronised. I suppose it’s kind of the same with writing.” In Marclay’s hands, media, sound, and time is made pliable and flexible.

“Of course I couldn’t do it now,” he adds, laughing wryly and pointing to a renewed appreciation for yoga – a hobby that was taken up during the production of “The Clock” –  “and for being away from screens. We’re stuck to our screens constantly, through phones, looking at email…”

The irony of “The Clock” existing as a work that’s material function is to be viewed on a screen is certainly not lost on the artist, yet the themes of it deftly deliver far beyond what we have come to expect from a life scaled back to scrolls and clicks. When asked how a conceptual art film that is 24 hours long has reached such a wide audience, Marclay himself doesn’t quite know the answer. For him, the audience is secondary to the urge to create something unique and interesting. “I make art that interests me – art that I feel encompasses more than just the material elements.” And it’s true. Marclay’s 1995 piece, “Telephones”, a natural predecessor to “The Clock”, is a work of strange beauty and melancholy that moves beyond the visual. Similarly using archived film footage, each scene depicts a different character and scene featuring the dialling of a telephone. We wait for a conversation that never takes place, as a moment before the phone is answered, Marclay switches the clip until it becomes a cyclical loop. “We’re sucked into these fragments of memory that aren’t ours, watching from a distance for something to happen that never really does quite happen – at least not in the way you would expect it to.”

Of course, the cyclical nature of time and the act of viewing it through the lens of the camera is in itself disorientating. In her book, On Photography, Susan Sontag writes of how the camera “presumes, intrudes, trespasses, and distorts.” We don’t wholly suspend disbelief because we know the time presented to us is fictional. However, “The Clock” is the Hollywood blockbuster’s natural antithesis. A 24-hour long film without a narrative is almost certain not to set the box office alight.

For Marclay, “time is something that we struggle with every day – it’s the ominous ticking clock”. The themes of death and decay are just as prevalent in the piece as the euphoria and joy of narrative cinema. As each minute goes by, the forgotten faces of actors long dead and buried resurface on the screen. For a moment, Marclay manages to bring the past back into the present day.

To watch “The Clock” is then a strange kind of headfuck. “I want people to be able to pop in and out, spend five minutes, 20 minutes, three hours, however long they want to experience it,” urges Marclay. As these minutes tick towards a full 24-hours, Marclay’s “The Clock” watches the viewer just as closely as we are watching it. It’s a steady and subtle reminder of how quickly time passes and of how little control we have over it.