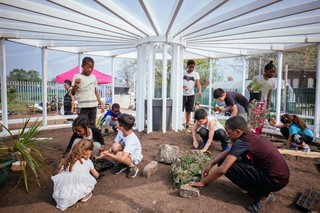 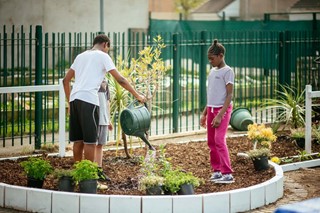 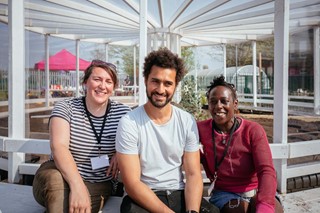 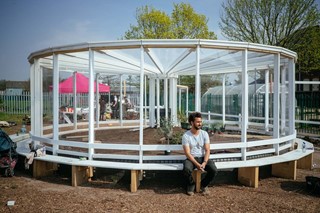 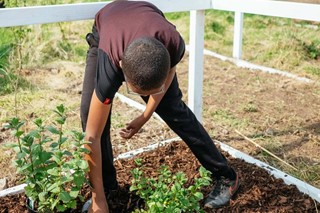 Succulent vines wrap around the inside of a circular structure; leafy textures are softened by a haze of Algerian florals and healing plants. Outside this wooden conservatory, there’s a hum of activity as children build sculptures to be placed around the garden. In the midst of it, is French-Algerian artist, Mohamed Bourouissa, who – in collaboration with local schools – conceived this site as a space for healing and growth. Inspired by an Algerian garden built by a patient of the psychoanalyst Frantz Fanon, the space centres the resilience of locals who overcome statistics that stereotype the environment they live in.

Outside its walls are the estates of Toxteth, an area in Liverpool that is one of the most deprived places in the UK. Nearby is the infamous Granby Triangle where the race riots of 1981 broke out; today 62 per cent of the children in Toxteth live below the poverty line.

Bourouissa’s practice is firmly rooted in social realities, with the artist often integrating himself into communities which are actively changing the situations they are confined to. Channelling the activism of Fanon and Eldridge Cleaver into his work, Bourouissa incorporates art into functional community spaces that deconstruct social stigmas. His previous work Horse Day (2014) explored the concept of black masculinity through the inner city stables of a neighbourhood in North Philadelphia. In response to the theme of the current Liverpool Biennial – Beautiful world, where are you? – Bourouissa turned his attention to organic forms, local collaborations, and events within Toxteth.

Speaking over the phone a few days after the Biennale’s launch, Bourouissa is careful to distance himself from the term “public art” – a word which he feels values the commercial over a community. His approach instead reworks art into a local identity that is usually alienated from such events by creating a living space that will remain long after it ends in October. The effect of this transcends the objective theme of the festival and focuses on people’s roles within the environment they already live in, and how it is – or can be made – beautiful.

“If you take the centre of the plant you can understand a lot”, he muses as he details the history of the garden’s Algerian plants. The Mimosa is a hardy tree of floral pinks, lashings of ferny leaves, and a complicated history of movement. The tree, Bourouissa says, is not – as he had thought – native to Algeria, but originally from Australia where it was then taken back to English colonies. After an exchange of territories, the French bought it to Algeria. In returning the tree back to England, Bourouissa reflects on the circular notion of colonial movement; how it has shaped the current national identities of countries like Britain and formed the psychological make-up of African countries like Algeria. The effect of this destabilises the fixed perceptions of national identity, by revealing the transient nature of nationality.

The mixture of plants in the garden cultivate an understanding of the sub-similarities found within the history of colonial diaspora and link the repressed experiences of Algerians with the Wind Rush generation of Toxteth, and the black Americans in Horse Day. Like the Mimosa, people have historically been displaced and have had to create roots in the areas they have been taken to, but Bourouissa is clear that he wants to act beyond moralising this. The garden’s structures create a formal and conceptual locus of what he views similar to, “people who have suffered having a quiet resilience, where you at first struggle and then you pass through it”. A perspective that, although conscious of the historical problems, excavates a sense of global solidarity and turns out an optimism that emerged through resilience.

He adds that the garden has been an ongoing learning process: “I was not a gardener, but I had to learn how to become one. I had this inspiration that I wanted to grow plants and to another type of communication.” This meta-communication of plants comes from understanding our ecological role as humans and discovering a more simple level of connection with the natural world. The plants having shown Bourouissa an alternative view of the world and his own place within it. “You have the leaves, then you have the flower, and then after you have the fruit. You see the cycle of development and it creates an understanding of where we are, of my own consciousness, and my whole situation of being a human,” he says. As Bourouissa demonstrates, the process of gardening is a constant development of resilience, where you are constantly digging to find places for growth.

The involvement of children was an integral part of mobilising the garden as an ongoing process. Bourouissa’s original intention had been for them to have workshops to learn how to create sculptures that could communicate resilience – however, the children's engagement came without any guidance from Bourouissa. He recalls having left piles of scrap wood in the garden from the structures he had been building and the children took it upon themselves to play and make their own. As Franz Fanon once said, “each generation must discover its mission, fulfil it or betray it, in relative opacity”. Having the space to be independent and spontaneous, the children’s sculptures have a sense of fearlessness to them. While the wood is piled up at jaunty angles – appearing to only balance by a hairpin – it is in fact solid. Bourouissa was astonished by what they created: “I don’t know if they did that consciously or unconsciously”, he says, “but they created something in the place that they were in. I realised then that I did not need to tell them what to do.”

It is through actions like these, not theorising, that Bourouissa broadens the garden’s concept of resilience into a wider perspective: “I don’t want to see it as defiantly this or that, I just want the space to create something that makes you think differently about what you perceive and engage with.”