Most famous for his large-scale paintings, the artist dips his brush into a melting pot of underground culture, Cuban heritage, and art history 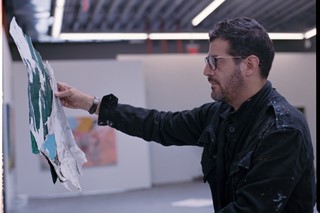 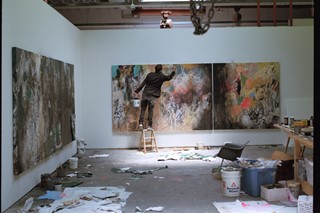 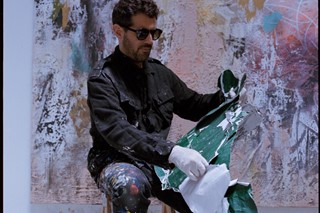 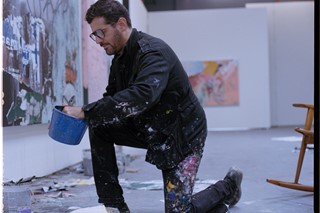 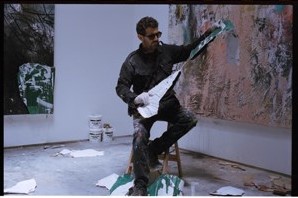 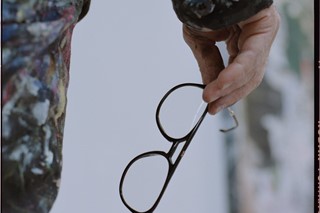 José Parlá’s paintings have no words, yet they speak volumes. Born in Miami, Florida, Parlá’s family relocated to Puerto Rico soon after but returned to the “Magic City” when he was ten. It was there that he witnessed the burgeoning of hip hop and breakdancing scenes, as well as the explosion of graffiti culture. Pairing this with a household overflowing with creativity – his father studied filmmaking and his mother taught him how to draw – there was no doubt in Parlá’s mind that he would be an artist.

From sneaking into neighbourhood art classes and learning about Van Gogh and Picasso to customising denim jackets for his high school friends as a kid, at 45, Parlá now layers his stories into sculptures and large-scale abstract paintings that have been described as having roots in the streets and abstract expressionism. While his works can be seen in permanent collections around the world – such as in London’s British Museum and Hong Kong’s Burger Collection – many also live in the public sphere. Spaces such as New York’s One World Trade Center (a 90 foot mural titled “Union of the Senses”, 2014) as well as on the streets of Havana (in collaboration with JR for “Wrinkles of the City”, 2012), allow him to share his thoughts in abundance. An intensive melting pot of experience and heritage, a fascination with historical markings, and the underground cultures that have never left him, the artist rounds out the final chapter of Carrera’s #DriveYourStory campaign. Below, Parlá takes a break to catch up with Dazed from his studio in Brooklyn.

“I’m not sure if people are going to see my work and see unity, or see it and want to fight for justice and freedom and equality... But one can hope” – José Parlá

Do you remember when your artistic bone kicked in?

José Parlá: I grew up in a creative household and as a young kid I remember telling my mother that I wanted to be an artist. I know that sounds really trivial as an adult to say, but I'm saying it from the perspective of being very young and not really knowing what that meant. I lived across from a vocational school which had art classes and I would sneak over there. They had books on Van Gogh and Picasso and the teachers knew my me and my brother from the neighbourhood. With those books in front of me, I was able to ask questions and adapt some of those ideas to the graffiti culture (around Miami). I started thinking about how those evolutions could happen within my own work, while, at the same time, holding a high regard for the underground culture, and I made this bridge between the two.

When I was 15-years-old, I was the guy who would paint a beautiful denim jacket for you and charge something like $100. If someone wore one, the next day somebody else would want another one. My mother's kitchen would be full of denim jackets! But at that point, I had no idea of the gallery system or anything like that. We would hear about Jean-Michel Basquiat and Keith Haring doing their thing in Europe and New York and that gave us inspiration. We were the next generation and we would look up at the original artists and think: ‘One day I'm going to Japan or London’.

You moved to New York in your early 20s, would you say the ideas that you were working with then have continued throughout your career?

José Parlá: I had this interest in dissecting walls from an archaeologist’s view of painting. It started with this concept that I would be a stethograph for the city and all that energy there. Not just about energy, but also the physical place. When you look at a wall, or what you liked about a wall, you know that it was not going to last forever – it's ephemeral. So I wanted to do something tangible, projects that are fragments of places, and something I'm still interested in doing.

I want to speak more about the ways in which you layer ideas of memories and history, how do you do that?

José Parlá: If I retain a feeling which goes into a painting, I somehow need to believe – whether it's half-truth or full-truth – that it transmits some aura that would lead the person to have open thoughts about what that (feeling) might be about. I'm not sure if people are going to see my work and see unity, or see it and want to fight for justice and freedom and equality. Those are the things that I'm passionate about, but if I'm not writing the words explicitly, as a message, then what people might read is always a mystery to me. But one can hope, you know? 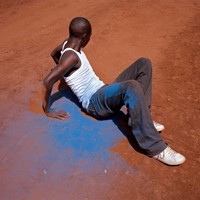 You have a huge artwork in One World Trade Center. Why did you want to make work there, in a space which, whilst very sacred, seems also quite corporate? And what does it mean to be there?

José Parlá: It’s really interesting – the building is also the headquarters of Condé Nast, so a lot of creative people are going in and out all day. There are art studios inside the building and artist residencies, so they are trying to promote more artistic vibes down there. At the same time. there’s a lot of people coming from all over the world and it's a sacred place to come and visit and pay respects to New York. When I was asked to do (the mural), it was such an honour because it was not just about me, it was about representing what it means to have a mural there, who will pass by it every day, and what are we communicating? It was a challenge.

I wanted to do something that was very colourful but respectful, which will somehow make people ask questions as to what it is. At the same time, I wasn't trying to celebrate. There’s a different type of message in the colour – it’s deep. Colour is not only a festive thing. It was about a synesthesia that I was experiencing partially because I was daunted by such a commission at times – it was massive.

You have to start somewhere, and I don't like to work with sketches so I just start working. I know it's going to take me a long time to get through many phases until I think something is interesting. I painted it for ten months, and in the middle of it, I started to see what it needed. All the colours start bouncing off and it started teaching me as to what the actual title was. I was looking for answers in the mural. I thought that if we could all feel a union of the senses, and have things more harmonised, in equilibrium, then, as humans, that would be a powerful thing. So that's where painting has the power to connect with people, even though they might not be interested in art. That's what public art can do. You might be on the way to a meeting and then you take a minute to look at this and suddenly there's art in your life for that moment. You might never have the chance to go to museums because you're super busy or it's just not your thing, so it's nice – a little interlude.

The movements you make to create your works are quite extreme, like jumping off a ledge to mark the canvas. I’ve read interviews where you’ve connected this to your love for dancing growing up. What made you first want to do that with your work?

José Parlá: When you want to create certain lines in drawing and painting, one of the things that allow you to do them with, for example with great curvature, is speed. The slower you move, the line might be a little messier, or the paint might drip. But if you do it fast, it’s sharp – like a slice!

There were dancers in my family; rumba dancers and ballet dancers, and people talked about dance. There were always these family parties where people would dance, but then you would have people show up, like an uncle you’ve never met or somebody who’s suddenly dancing, and they had so much style, right? And you’re like, ‘oh my god. This is out of control!’ So you take some of that as part of who you are. As a little kid, you absorb it. I started with the Latin styles that were part of my family and when we moved to Miami in the 80s, the breakdancing energy hit me like a wave. It took over and everybody had a style and everybody was battling each other in a friendly way, and that just came to be part of who I am you know. So, when I paint, that’s just what comes out. But the jumping off the ladder was an accident! Because I forgot I was on the ladder.

(laughs) What do you mean?

José Parlá: I was up there painting, totally gone, in another world! Basically, I thought I was on the floor and I walked off (of the ladder) and I had the marker in my hand. So, as I stepped, I went flying, but I did the painting. Then I thought, ‘I can do that again but I can do it with intention’, and so I started practicing and it became something where if I wanted to do lines that look like they were raining down – like calligraphy raining from the top to bottom – then I jumped up and down a lot, and jumped off the ladder – it just became a thing.

You’ve got an exhibition coming up in London in October called Echo of Impressions, can you talk about that?

José Parlá: It will be during Frieze at Ben Brown Fine Arts and it will be my first solo show in London. The title Echo of Impressions comes from everything that we’ve been talking about; that want for humans to leave a mark somehow. One mark might be on a painting made by an anonymous person, a rip on a poster torn by another anonymous person, a car crash on a wall, the paint from the car on a surface, in another situation. All those things, all those mixes, a cacophony of sounds and people and experiences and moments and scratches and smells, and it’s a buzz that we are surrounded by. Anywhere we go, it’s palpitating.