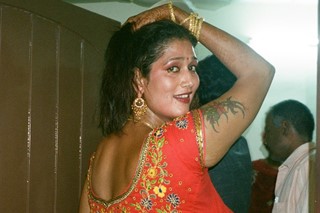 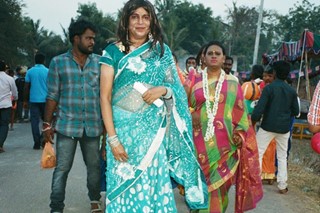 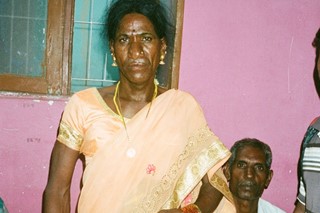 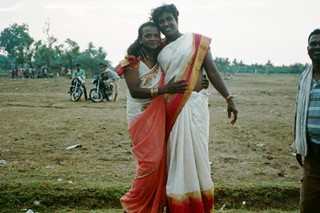 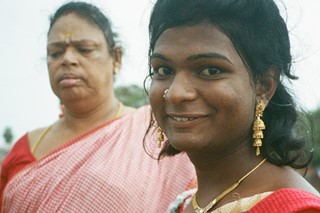 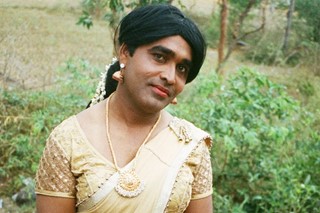 Aaliyah Kahn, who transitioned ten years ago, is dripping in jewels and sweat in the sweltering southern Indian heat. She’s describing how she feels “totally woman”, beaming, “I’m so happy to be living like this.” The 28-year-old is on her way to compete in the final round of the Miss Koovagam beauty pageant – the biggest trans beauty pageant in India. While she feels nervous, she also strongly holds the belief that “everything is possible”.

The Miss Koovagam pageant is just one facet of India’s Koovagam festival, a mega-celebration of transgender pride, taking place over 18 days. “It’s like Glastonbury, but for transgender people and in India,” says director Jess Kohl, whose latest film Nirvana – with art direction from Derek Hardie Martin and premiered on NOWNESS – follows Aaliyah and another trans woman named Chintu as they celebrate at Koovagam.

The ancient story of Hindu god Koothandavar is at the centre of Koovagam. Hindu legend has it that fellow god Krishna changed into female form, becoming a beautiful seductress called Mohini in order to marry Koothandavar. Shortly after the marriage, Koothandavar was executed, leaving Mohini mourning her husband’s death, before transforming back to Krishna’s male form.

It is easy to see why this story of gender fluidity and transition holds such significance for India’s trans community – it’s even believed that trans people descend directly from Koothandavar’s lineage. It's this “intersection between religion, gender and sexuality” that filmmaker Jess Kohl finds fascinating. Below, she shares a series of photos from the festival and we catch up with her to find out more.

“Being one of oldest trans communities in the world, they are almost mythical, close-knit, and secretive” – Jess Kohl

How did you become aware of Koovagam, and what drew you to make a film about it?

Jess Kohl: I’ve always been fascinated by the position of the third gender in Indian society. Being one of oldest trans communities in the world, they are almost mythical, close-knit, and secretive. They are feared, respected, and discluded by mainstream society.

I knew I wanted to create work around this vibrant pocket of LGBT society, so I began researching and discovered Koovagam – which is the biggest transgender gathering in the world and happens in a small village in Southern India. I felt compelled to make a film about it, I knew it would be so visually arresting and full of fascinating people.

What is the atmosphere at the festival?

Jess Kohl: There are lots of weird and wonderful happenings at the festival, such as trans women blessing local villagers, travelling tattoo artists with pet monkeys, entertainer families whipping themselves, and, of course, many beautiful, colourfully dressed trans women in attendance.

You have said that you have a particular interest in lensing subcultures and the marginalised in society, why is this?

Jess Kohl: I find that the full spectrum of humanity can be found in groups and individuals who live on the outskirts of society, whether they choose to be there, or have been pushed out by the mainstream. I want my work to give a voice to those that might not be heard otherwise. Many of my influences, like Diane Arbus, early Larry Clark, and Mary-Ellen Mark also found inspiration in misfits and those on the fringes. My own feelings of being an outsider or ‘other’ allow me to connect and immerse myself in outsider communities.

In Indian culture, “nirvana” signifies a state of peace, tranquillity and happiness. Why did you choose to name the film Nirvana?

Jess Kohl: Trans women in India have their own language, and I chose to call the film Nirvana because that is the word the community use to refer to their surgery/castration. I think the word is really interesting in this context. Their feeling of discomfort in their assigned birth gender is so great that this extreme surgery is the equivalent of an enlightened state.

Koovagam is a safe space for the trans women who celebrate there. How did you make sure that you weren’t violating this while filming?

Jess Kohl: Koovagam is a really celebratory place, and the people that attend really enjoyed being seen and filmed. Their lives are hard and it’s their time to shine, so filming wasn’t an issue – it was welcomed, which I think comes across in the film. Unfortunately, Koovagam is no longer a totally safe space for trans women. Sex crimes and theft have become an issue, with local men taking advantage of the trans women.

There were uncomfortable moments filming Chintu and Aaliyah outside of the festivities. All of the women want to portray trans life in India as completely positive, but the longer I spent there, the more the cracks started to show. The community is secretive and they fiercely look out for one another, but there is a dark side – and some of the “mothers/gurus” double up as pimps. The “chelas”, or daughters, have to give all of the money they earn from sex work to their “mums”. Seeing Aaliyah struggle with sex work for her survival was really emotional and I felt too sad to film parts of it.

Aaliyah is shunned by her family, while Chintu has been completely accepted and is engaged to be married with her family’s blessing. Did you purposefully choose to focus on these two trans women because of their highly different circumstances?

Jess Kohl: I actually met Aaliyah whilst at Koovagam. She was participating in the Miss Koovagam competition and she really stood out from the other contestants, with her western dress and afro. Her “mom” was very protective of her (but) she was so charismatic, full of sadness and dreams, I knew I wanted her to have a lead role in the film.

She is the perfect contrast with Chintu, who is an exception to normal trans life in India as she is accepted by her family. It was really important to tell Aaliyah’s story, which is more in line with many of the womens’ experiences.

Family is a major theme in the film. Many of the girls dream of family acceptance. It’s hard to be independent in India and people need to group together for survival. It’s really awful that most of the trans women have to choose between being who they want to be or being with their families.

What do you ultimately hope to show people with this film?

Jess Kohl: I want to shine a light on a beautiful and neglected pocket of the LGBT community in India, and challenge preconceptions by allowing an insight into Aaliyah and Chintu’s worlds. This is particularly important in mainstream Indian society, where the culture is to shun the transgender community.

I also want to highlight the importance of family acceptance, using this microcosm to tell a bigger story about issues that affect the LGBT community globally.