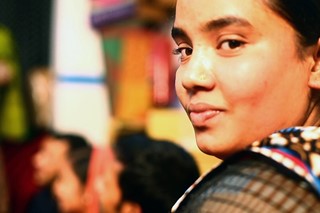 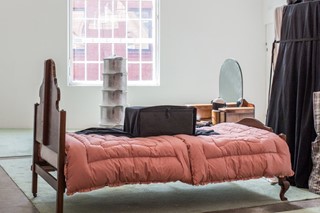 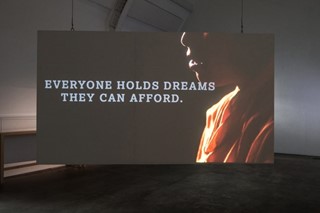 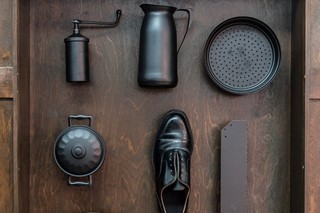 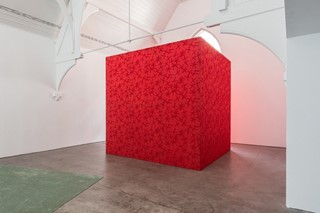 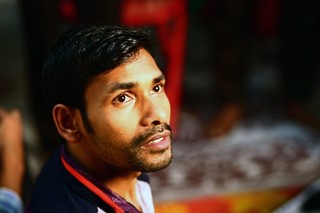 While many think the experience of migration doesn’t affect them, Afghan British designer and artist Osman Yousefzada will tell you it’s as common and as impactful on collective human life as getting dressed every day, because fashion and migration are inextricable. Just as we douse ourselves in the fabrics that make us feel brave, a metaphoric veil of heroism is used by migrants who make the life-changing or life-saving journey to a new life. Just as fashion is used as an assertion of identity, objects play a paramount role in the solidification of personal culture in a new space. So, just as fashion affects every person on the planet, so too does the experience of migration. It’s a powerful sentiment and one that has rippled through Yousefzada’s ten-year career as a haute couture womenswear designer, whose sculptural designs are driven by the artist’s experience as a son of migrants in 1980s Birmingham. Now, Yousefzada brings his philosophy to life in his first solo exhibition, Being Somewhere Else, currently on show at Birmingham’s IKON gallery until June 29. The show also coincides with The Migrant Festival, a four-day-long experience in Birmingham, which will host over 17 events, each tied to experiences and concepts of human movement.

The show features four installations that all reflect on the designer’s experiences in the fashion industry, and as a migrant son. Because of Yousefzada’s honesty, transcendence is a key to the exhibition, with the artist hoping to make viewers feel as if they are ‘somewhere else’. Take the installation of an “Immigrants Room” (2018), as example. The deeply personal work simulates Yousefzada’s mother’s room in their first UK home in 1980s Birmingham, and literally immerses viewers in her world of cultural displacement. To assert the important role objects play in the process of migration, the room is littered with her personal artefacts: timber 1940s ‘unfashionable’ furniture juxtaposed with the cultural significance of a stack of brand new, silver pots, and collections of objects wrapped up neurotically in plastic bags that were wrapped ready for immediate flight in case the family was forced to move again. All relics signify a life lived between two worlds and a fight for the migrant dream of a place a safe space to feel proud of. “My mother has always felt vulnerable,” Yousefzada explains in an interview with IKON’s director Jonathan Watkins. “When we were growing up, there was always an idea, through fear mongering, that ‘the English people were going to chuck us out’. Yousefzada also explains that this room “was the only environment she felt she could control, a kind of safe space for a woman otherwise feeling trapped in a patriarchal society.”

“Cupboard of Love” (2018) traces the inherent gender disparity within the act of migration. Surrounded by timber walls, to allude to the fact that his father was a carpenter is a cupboard filled with a set of nine spray-painted black items, which include a shoe, a saw, and a plait of black hair. This masculine installation is a harrowing reflection on the domestic abuse his mother endured at the hands of Yousefzada’s father. “There is an idea that the man leads the charge and can never be wrong – like a hunter, trailblazing for others to follow – (and this) reinforces patriarchal status,” Yousefzada tells Watkins. “It’s very different if you’re born a woman, especially if you come from rural Pakistan, on the north-west border with Afghanistan. There, the women are completely covered. The same is the case in other patriarchal societies.”

Tracing Yousefzada's personal reflections back to the fashion industry is the show's film component. “Welcome to the Machine” (2018) aims to demystify the lives of low-wage garment workers in Rana Plaza, Bangladesh: the place that Yousefzada refers to as “the chasm between the maker and the weave”. The clip shows garment workers trying on high-street clothing (similar to the hundreds that they make each day), and asks them to imagine who their muse is when making these clothes. In a deeply moving series of interviews, the workers reveal the underlying colonialism of low-wage garment working, some claiming their muse is “taller than me, much fairer than me, much more beautiful than me...” Osman explains to Watkins, “The situation I’m dealing with is very political and post-colonial. These people still feel subservient. But, like my parents when they came here, they feel that if they keep their heads down and work hard something’s going to happen, something fruitful. With an idea of social mobility for the next generation, they are being self-sacrificial.”

With the final parliamentary decisions on Brexit to occur in the next year, Youesfazada’s latest project could not have arrived at a more crucial time. Despite the fact that migrants continue to bring much needed cultural vibrancy to the UK, with 2017 statistics showing that 244,000 more people immigrated to, than emigrated from, the country, the Conservative party continues to drive narratives of xenophobia. In this sense, Yousefzada’s palpable account of being a second generation migrant in Being Somewhere Else gives the conversation much-needed vulnerability and exposes misunderstanding eyes to the plight, flight, and human struggle of being an immigrant. “Above all, I wanted to convey the feeling of ‘being somewhere else’, especially in light of my experience growing up in a Pashtun community in Balsall Heath in Birmingham, a migrant community full of people who had made journeys to this place for a better life.”