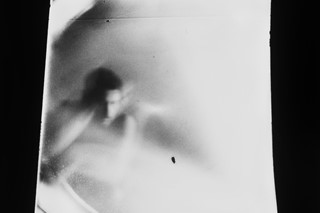 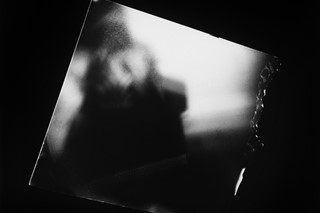 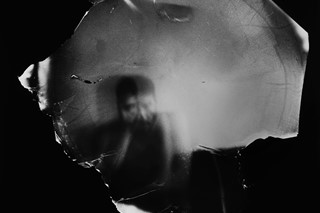 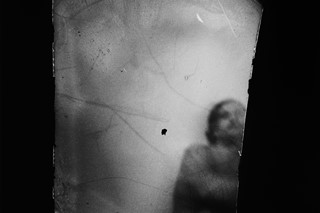 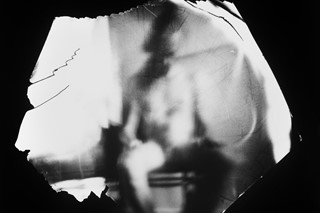 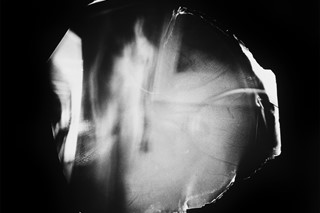 As the female gaze comes to the fore, artists are beginning to examine and explore the possibilities of what exists, what it is to be a woman looking at the world outside of her self. For American artist Dani Lessnau, the gaze opened the door into uncharted realms in search of the things that a camera can capture that the human eye might otherwise miss.

For her series of work titled extimité, Lessnau makes tiny pinhole cameras that she places in her vagina in order to take portraits of her lovers during private moments. Here, Lessnau has invented a new form of picture taking, one in which she uses her entire body to “see” – to sense, feel, and capture the moment of extremely powerful intimacy. Each photograph is made with an exposure lasting between a minute and two and a half minutes, an extremely long time for both Lessnau and her subjects (all of which gave consent) to hold still in order to create the photograph.

After recovering from a protracted illness during her late teens and early 20s, in 2017, Lessnau began to use photography as a form of healing and a way to get in touch with her body.  Looking at the ways in which vulnerability can be empowering, both for herself and her subjects, her work explores the female body as a vessel for creation, literally, while simultaneously examining the extraordinary space that exists between us when we are alone, together, and naked.

Here, Lessnau speaks with us about the discoveries she has made along the way, about herself, her body, and the power of photography to say the things that cannot be said.

How would you describe the female gaze?

Dani Lessnau: We are just beginning to scratch the surface of the possibilities of perception there because I feel we "gaze" with our entire bodies, not just our eyes. Our gaze is as individual as the sensations of our body. It is fluid, evolving in relation to our individual selves and the flux of the moment.

People had started to talk about the reversal of that and what the female gaze looked like. Initially, I started taking pictures of a partner but I was engaging in a power dynamic that didn’t feel like me. I was using a pre-existing language to engage in a conversation but the language wasn’t natural. I thought, “How can I do this in a way that honours what I am feeling and what it is actually like?”

That’s where the notion of vulnerability really came into play, the empowered vulnerability where there was no hierarchy between my subjects and I. There was this space where both of us could be autonomous and vulnerable. That’s where my gaze originates.

How did you come to create this intimate form of photography?

I have always been drawn to photography. In the beginning, I was struggling to find a way to communicate something being viscerally felt through a visual medium. I wanted to create a tactile, sensational, corporal feeling in the image. I was introduced to Ann Hamilton’s series Face to Face, where she created cameras, inserted them into her mouth, and photographed subjects. It expanded my notion of what was possible as I realised that I could merge the camera with the body.

One of the things I wanted to explore was the breath: how that relates to the body, and to pain and pleasure as well. The beauty of inserting a camera into my vagina was it was completely subject to the breath. I was able to allow the breath to become my active element in the process. I could be passive in the sense of holding the position and developing a relationship with silence and stillness in order to allow for sensation to surface – and also active because we have to breathe to live (Laughs).

“I was introduced to Ann Hamilton’s series Face to Face, where she created cameras, inserted them into her mouth, and photographed subjects. It expanded my notion of what was possible as I realised that I could merge the camera with the body” – Dani Lessnau

What were the ideas you wanted to explore in this project?

Dani Lessnau: After doing the project I started reading a lot of Luce Irigaray, a French philosopher. Everything I was doing was intuitive but when I started reading her, I started understanding where my intuition was coming from and I felt a connection and a resonance to some of the things she was writing about.

In Sharing the World (2008), Irigaray writes, “(Silence is) a return of woman to herself, in herself for a meeting again with her own breath, her own soul.” Then she takes it one step further: “The first task is to consider and cultivate the relation with other as other.”

The silence is what men and women share. It is a place where the other can exist and be. As much as the experience was one with my own body, it was also an encounter with my intimate partner. It was a way for me to find my autonomy within an intimate encounter and still embrace what surfaced.

Can you talk about your how decision to use a pinhole camera as well as develop the film yourself was an integral part of the work?

Dani Lessnau: A pinhole camera is the easiest homemade camera. It’s lensless, which allowed me to turn my body into a camera. I use a pinhole camera because it engages immediately with the notion of time. It created a space for the breath to act on the film.

The nature of film is important because of the physical and psychological nature of the word “impression.” Impressions can be physical, like my physical hand impression as I cut up the film for the pinhole camera or the light impressing a trace on the film. They can also be psychological. In relationships, we leave impressions upon each other. I wanted to create a space where the unseen could leave an impression.

There’s a sense of wonder and magic to me. There is a surrender to not being in control of the image to a certain degree. I created a space for something to surface and be felt, and then I get to see it and discover what I was feeling in a visual way.

My primary sense of experiencing the world is touch. There is a sense of discovery in the hands. When thinking about the origin of creation, when you have given birth to something, touch is such an integral element in a multilayered sense. Allowing things between two people to grow and to feel, touch had to be a part of it for me.

What did you discover about yourself and the female body through this experience?

Dani Lessnau: I was learning how to embrace my intuition, this non-rational state that can be very creative and fruitful, and how vulnerable it feels to embrace that space. Throughout the process, I learned where I had put up boundaries, where my comfort zones were. Then I asked, “Why are these my comfort zones? Why did I put up a boundary? Where did it come from?”

Our capacity for the pleasure can be so elegant, subtle, varied. There’s a lot of wisdom that comes from that ability to listen, to feel these subtleties that the female body naturally goes through. There’s a lot our bodies can say if we listen. This goes for men as well.

What did this project teach you about your relationship to men?

Dani Lessnau: There is unpredictability in every moment. Every encounter.  You can only know it once you are in it.  It is exhilarating and vulnerable.

In relation to my individual lovers, some were awkward or shy initially and were less so. As we engaged in the process, we opened ourselves to the experience of a freedom unique to each of us.  The sense of freedom was arousing in and of itself. Each situation and dynamic was unique and so were the shared experiences and encounters.

The work got me approaching our differences in more of a playful way. There were certain vulnerabilities that the men exhibited to me that I didn’t expect. I think that we’re different and that is beautiful. I was allowed to see their vulnerability and I value that. It’s about understanding and respecting each other.

“In relationships, we leave impressions upon each other. I wanted to create a space where the unseen could leave an impression” – Dani Lessnau

Your work reminds me of how people sometimes feel like, “There are things that do not need to be said.” Your photos capture feeling that feeling perfectly. Could you speak about the camera’s ability to see what the human eye does not?

Dani Lessnau: Intimacy allows something to surface in a space of vulnerability. It’s not something that can be crafted or forced – it is something that has to be allowed. One of the reasons for engaging in this project is to be in a space that I couldn’t possibly put into words. I don’t think I could paint this either because it’s being within the encounter, within what is happening rather than creating an idea of it or just describing it from the outside. The nature of intimacy is a space in a more subtle language than words offer. It can be referenced and described, and there are people who do it really well but I feel like they are within it in their writing. Words aren’t my medium (Laughs).

You’re in a space of freedom from constraints, where you find strength in vulnerability. Could you speak about how this has transformed you as a person and an artist?

Dani Lessnau: In a sense, I don’t recognise who I was before. There was a discovery that happened when I started this work and it changed the way I engaged with everything in my life. Even when I am starting a new project, it’s almost become harder that there’s this addiction to pushing on the boundaries of things and to really ask yourself what’s going to change things. The first person you can start with changing is you. It’s a continual process. It’s not like I am reaching for some goal. I’m just on this path now and constantly becoming something new.