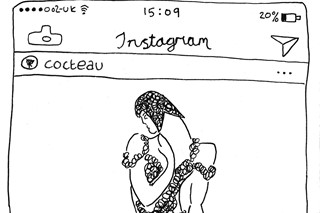 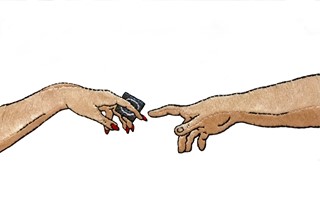 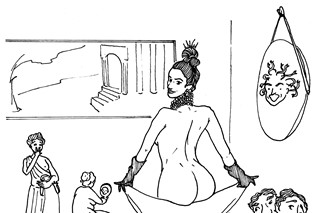 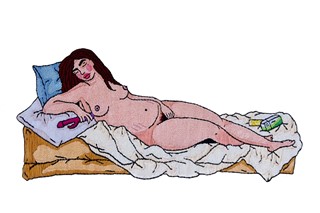 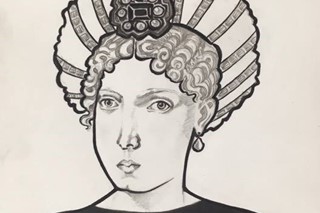 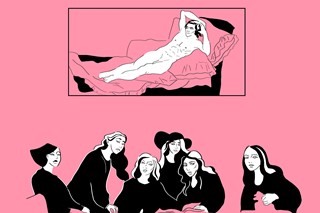 What if your fave French avant-garde artist was on Instagram? Do filtered selfies and personal brands go back to Renaissance socialites? Tabloid Art History is reimagining the art canon through the lens of pop culture, elevating the charts, MTV reality series and 00s pap shots of Paris Hilton and Lilo to a space that takes it seriously. What started as a joke shared between three students then blossomed into a Twitter account (with over 32k followers), comparing Anna Nicole Smith at her wedding to Russian realist Vasili Pukirev, a gold crowned Queen Bey and Botticelli, tabloid snaps of Britney and Klimt.

Now T.A.H volume one, a full colour print zine, has landed: a stunning, stimulating and accessible deep dive into how we practice and consume art. After creating physical prints for a show by collective Can’t Win Don’t Try, Elise Bell, Chloe Esslemont, and Mayanne Soret began to discuss the zine format as a new medium to play with the “straight-faced stereotype of art history as a discipline”, bringing classic and modern art to a wider audience, and tracing how pop culture and art intersects.

“Jeff Koons is making Fragonard handbags for Louis V, Kanye is making gold chains from the Bas Reliefs of Ghiberti, and ‘Selfie Culture’ has entered the Saatchi. So, what better time to celebrate, discuss, and evaluate the relationship between art history and pop culture?” the zine’s intro reads.

Pulling together a group of poets, illustrators and writers, Tabloid Art History examines female power equally through Beyonce, the acclaimed Houston musician, and Isabelle d’este, a Renaissance Italian sociality: we see how both Bey and d’este construct their own self image through IG or commissioned paintings. Another piece illustrates the modern boyband and the image of ephebe, a youth treading through puberty, on the brink of manhood, in Greek art and culture: we see, fascinatingly, how the gaze has shifted from male to teenage girl. Elsewhere, we explore the marginalisation and celebration of Grime and underground culture, and how neoclassical self-portrait artist Vigée Le Brun finds spiritual successors in Kim Kardashian and Paris Hilton.

“The different topics and focuses people have chosen to explore within that attests to how creative and insightful our writers and contributors are, and we’ve really loved that the zine has been able to put this mix of various types of work together,” the trio tells Dazed.

Mayanne says, that after they received submissions, they began thinking of the wider context: “We did have an awareness of how that content interacted together within the mag,” she explains. “I started and closed the mag with pieces about women’s self presentation, I put Saint Torrente’s poem toward the end as a stand alone art piece, and I purposefully put Lamar’s piece on grime in the middle, because it’s an account of art making today, it’s so contemporary and urgent, and it really goes deep into the political aspects of the creative process, which I think is a very important topic to discuss today.”

The main mission of the zine is to document an unabashed love of high, low and everything-in-between culture. That’s “whether watching the latest episode of the Kardashians or getting really deep into homoeroticism in Classical Greek sculpture, or both!” they say. “We didn’t put forward any guideline for contributions beyond we wanted it to link pop culture and art history, and be presented in an academic format, but there’s a feel about this first issue that these were topics our contributors had been thinking about for a while but didn’t have a platform or reason to write it.

“So maybe the more we go about with the art history and pop culture comparison, the deeper people will get into comparing the two, and analysing today’s culture.”

The editor’s note outlines a firm mission to elevate voices that are a lot of the time cloaked in classism, elitism and racism. “Expanding voices and bringing people into the fold of art history who have been excluded from the discipline in the past is really important. TAH VOL.1 is only a starting point, and we've tried to diversify what art history means through the articles included,” the add.

The zine has a page devoted to shouting out the work of other collectives and groups, including The White Pube, Vandal, Gal-dem, Arts Emergency, Museum Detox and the work they do.

When the original Twitter account first began taking off, the group followed along with ITV dating reality show Love Island – contestant Marcel was compared to Edvard Munch’s “The Scream”, a furious Amber became Caravaggio's Medusa. I asked the team what shows were inspiring their art criticism now and in future tweets. Chloe points to HBO’s Mad Men: “In relation to what T.A.H explores, one aspect I really love about the show is getting to experience seeing a different decade’s pop culture play out in ‘real time’ so to speak, via the conversations the characters are having, the movies, TV shows, sports matches they’re watching, the references they’re making.”

For Elise, it’s Gilmore Girls. “The fact that Rory can be talking about a paper she has to submit to her Yale professor on Derrida to casually mentioning The Bachelor is something that I love so much – but, the show also has major flaws, namely in terms of its lack of diversity and representation.”

“I’ve been listening to a lot to my favourite podcast, Spirits, which explores – mythology, folklore, and urban legends, just hearing the host Julia’s and Amanda’s voice can brighten a very, very gloomy day,” adds Mayanne.

Whether you’ve seen every episode of The Simple Life or can trace the detailed history of the Surrealist art movement across countries and years, the first Tabloid Art History zine hopes to open up question, debate and intrigue into how we explore all elements of culture: music, sculpture, makeup, a scratched boxset DVD.

Keep up with all things pop on Tabloid Art History’s Twitter home here, and buy their first issue here