As the Sochi Games approach, two barred journalists share images of the most absurd Olympic project in history 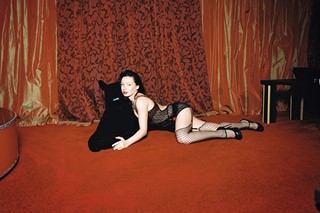 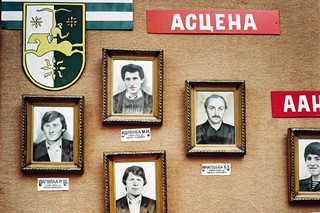 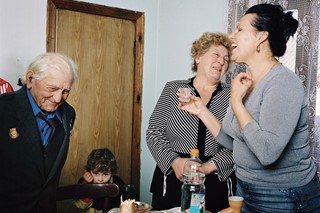 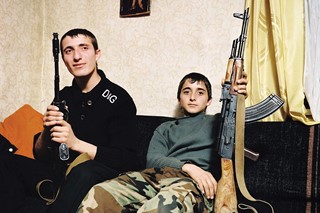 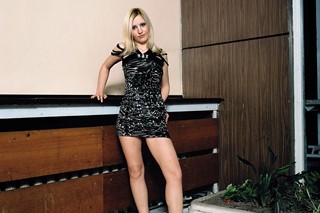 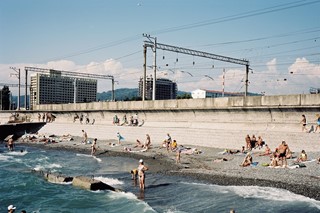 “People are trying to organize Winter Games in a subtropical conflict zone.”

With that unambiguous statement, photographer Rob Hornstra and writer Arnold van Bruggen introduce their new book, The Sochi Project: An Atlas of War and Tourism in the Caucasus. With the help of crowdfunding, Hornsta and van Bruggen spent five years travelling extensively around Sochi and the surrounding North Caucasus region (seven of the poorest and most violent republics in Russia) to document the physical unfurling of Putin’s Olympic dream.

The result tells a very different story from that proffered by Russian pro-Games advocates: images of run-down Soviet spa resorts and sprawling Olympic construction sites around Sochi are juxtaposed with bleak family portraits and written accounts of the countless tragic fates dwelling in the nearby North Caucasus mountains. In sum, it magnifies the blatant absurdity of throwing a $50bn winter-themed party in a place where human rights violation is far more frequent than snowfall.

Last year the project won Hornstra the World Press Photo Prize, but such recognition does not wow the Russian authorities, who have now – in the true spirit of sportsmanship –rejected his visa application and barred him from entering the country for the next five years. Forced to follow the Games from his native Netherlands, we spoke to him about what he thinks the world can expect from the first-ever subtropical Winter Olympics.

Dazed Digital: When the Sochi Games were announced in 2007, you had already been working in Russia for some time. What first drew you to the region?

Rob Hornstra: I’ve been working in Russia for ten years now. After graduating, I wanted to make a documentary there about the first generation growing up after the fall of Communism. I was fascinated by the speed at which the country was changing at that time – it was pretty much bankrupt at the end of the 1990s but somehow climbed back up very quickly, and I was interested in how young people reacted to that growth. I met Arnold through a mutual friend around 2006, and we ended up spending New Year’s Eve that year in Abkhazia, this broken, discordant little country next to Sochi. When the Winter Games were announced in 2007 it just seemed like such a controversial choice and an obvious opportunity to do a project.

DD: What was your initial reaction when you heard the announcement?

Rob Hornstra: Arnold and I both found it completely bizarre, which is the reason why we decided to turn it into a long-term, slow journalism project. But looking back, it’s turned out so much weirder than we ever expected it to be. In 2007 nobody really cared about Olympic Games over there – we were just two insignificant journalists with no news organisation behind us, trying to find meaningful stories about the people who lived in Sochi and the nearby regions. But we always wondered why no one seemed to question the IOC’s decision to put the Winter Games in this summer resort town where no snow falls in the winter.

DD: How did the five-year plan work in practice?

Rob Hornstra: Because we used crowdfunding, we had to show people we had an actual plan, so we made this programme in which people could become bronze, silver or gold donators. Then we promised silver and gold donators a publication at the end of each year, so the project became based around these annual publications. The first one we did was about the traditional Soviet sanatoria in Sochi. We wanted to make at least two four-week trips each year to visit the Olympic construction site and see the development step by step. I think in the beginning we had this idea that it would be like a part-time job with a couple of months travelling in between, but after just a year it had already turned into a full-time job – and by the second year it was way more than that.

“But in 2012 we went back and started really digging deep into some sensitive subjects, and – as predicted – we were arrested a couple of times. It culminated in July 2013 when the local authorities told me I couldn't enter Russia for the next five years”

DD: Throughout those five years, could you feel the job becoming more difficult, especially as security around the Games tightened?

Rob Hornstra: Yes. Without actually realising it at the time, our initial plan to focus separately on the different regions through yearly publications turned out to save us, because what happened was we quickly realized that the North Caucasus would by far be the most dangerous region to work in. So we decided to start by covering the history of Sochi tourism, Akbhazia and so on. Only towards the end did we start working on the North Caucasus – we expected to get in trouble there so we didn’t want to risk doing that one first. We started working there secretly in 2011, without publishing any stories. But in 2012 we went back and started really digging deep into some sensitive subjects, and – as predicted – we were arrested a couple of times. It culminated in July 2013 when the local authorities told me I couldn't enter Russia for the next five years. So I guess we already realized in 2009 that the project might end up going in that direction.

DD: What has been your impression of the local sentiment towards the Games?

Rob Hornstra: In 2009 we were hearing from a lot of citizens that they really weren’t at all interested in the Winter Games. The people of Sochi consider their town a summer resort; they earn their money on beach tourism during the summer and a lot of people don't understand why anyone would want to come in winter. But even if they wanted to speak up, I think most people feel it wouldn’t even make any difference. We followed this small group of what I guess you could call environmental activists in the beginning of the project. Of the two most passionate leaders, one became a local government spy and the other – a former journalist – now works for the Olympic Committee. These are smart and brave people, but to them, activism just doesn’t make sense in Russia.

Another thing is that while Sochi may be a traditional Russian tourist resort, it isn’t necessarily ready to be an international holiday destination. It’s a beautiful city, but the prices in Sochi are surprisingly high – and the quality not always accordingly so. Soviet culture held the tourist in lower regard than the resort worker; it was a totally reverse client-service provider relationship from what Western culture is used to. So to this day the first impression many visitors get is that the people behind hotel desks or in restaurants, especially those of the older generations, are rude and won’t speak English. I love the city of Sochi, but I’m not sure it’s ready to accommodate international tourism at the Olympic level.

DD: How do you feel about not being able to go back?

Rob Hornstra: From what I gather we're absolutely not allowed to enter Russia for the next five years. Some people believe it's only for the Games, but I doubt we will get in again, even after. In terms of the project, it is disappointing because, of course, we'd love to go there and document what happens during the Games and afterwards. Most of all, having spent ten years in Russia, we’ve made many friends and I so badly want to keep following and documenting their lives. So it’s a bit of a personal disaster, but on the other hand it might be time do something new. The world’s a big place.

The Sochi Project: An Atlas of War and Tourism in the Caucasus is available now at Aperture.org