Kim declares that she is "like a faggy, lesbian messenger boy that delivers legends and messages for the Gods." 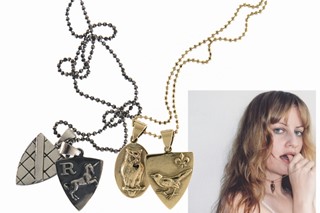 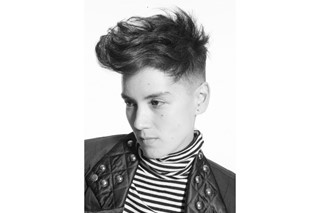 She is mostly known for her engagement in the neo disco arrival Hercules & Love Affair and her Boy Scout quiffs, but deep down she is a raver-girl from Hawaii that ended up in New York as a DJ, jewelry designer and dyke style icon. Kim Ann Foxman talks about her disco passion and jewellery designs which mix lesbian bling-bling with distinctive macho symbols such as tiny bucklers, sailors’ anchors and bears.

Dazed Digital: You are both a musician and a designer – which came first?Kim Ann Foxman: I was a designer first; I grew up around jewelry because my parents were both in the business. I used to be in an indie electronic band in San Francisco at the same time I was studying jewellery in college 10 years ago, so I was growing in both areas simultaneously.

DD: Your designs use very masculine symbols such as shields, bears and metallic edges. What story do you want to tell with your jewelry?KAF: I like things classic, well made, sturdy, with a unisex appeal and timeless quality.

DD: You haven’t always lived in Williamsburg, New York. What was your dream when you bought your single flight ticket to The Big Apple?KAF: I was born and raised in Hawaii. I lived there until I finished high school and I immediately moved to San Francisco for college ... but mainly more for night life.
I didn't move to New York until 7 years later. I got bored of Frisco, and a girl I was with at the time also inspired me to move to New York for a change.

DD: Where is your favorite spot in Williamsburg?KAF: I love food, so I have to say I like Marlow & Sons (a 21st-century gourmet Brooklyn bodega at Berry Street, Ed.). I also love the store Oak (208 North 8th St., Brooklyn, Ed.). They also have my jewellery there, but I like to shop there as well.

DD: How did you meet Andrew Butler of Hercules & Love Affair?KAF: Andrew is truly one of the best friends in my life. We met when I first moved to New York. He was dating a boy that was a roommate of a girl I was dating at the time. After both our relationships were over we ran into each other at a record store. And since then, we have been close sidekicks. We immediately bonded strongly over music and specific San Francisco DJs and tracks from the rave culture that we both were part of. I was in a way his first audience to hear the tracks he made ... and his first no. 1 fan. He was my resident DJ at a party I threw called 'Mad Clams at the Hole.' And during this time period we started a film filled 'Working Relationship' ... that was just our idea of having fun.

DD: Hercules & Love Affair relates to the legendary and glamorous disco scene of New York with clubs like Paradise Garage and the DJ Larry Levan. How and when did you discover disco and house?KAF: I first discovered house music early. I was already getting into rave culture in 1992, when I was 15. Growing up in Hawaii I discovered house music and in high school I even worked on school nights in a club called The Access. It was my first real job. There were some good DJs there that introduced me to what is now considered “classic house music”. It’s funny because my mom was quite strict with me staying out late with friends. But she let me have this job where I worked at a club on school nights. They also had performances at this club, and I was really excited when Deee-Lite played there because acts like that rarely made it to Hawaii. I learned about house music before disco. Andy has introduced me over the years to disco and obscure disco. But house music often sampled disco, so some was also familiar to me because of that.

DD: What is your most precious and secret disco anthem – and why?KAF: I do love “Precious Little Diamond” by Fox the Fox. It’s not much of a secret but I enjoy keeping secrets a secret, and it’s a great anthem, and it always makes people go crazy on the dance-floor.

DD: In ancient Greek mythology there are macho warriors, female beauties, creatures from beyond Hades and cross-genders. Somehow the New York queer scene is no different – even in Hercules & Love Affair. In that family tree where is Kim Ann Foxman?KAF: I am like a faggy, lesbian messenger boy that delivers legends and messages for the Gods.

DD: Which book is on your bedroom drawer right now?KAF: “Escape from Fire Island!” by James H. English – a gay sex, choose-your-own-adventure book – and Butt Magazine – I do love the interviews!

DD: What do you sing in the shower these days?KAF: I often practice vocals in the shower before performances; so mostly Hercules & Love Affair related songs.
Read More

5 albums to stream this week
MusicIncoming