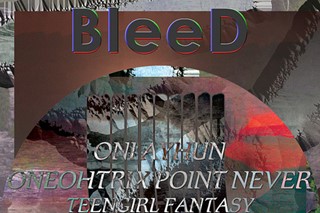 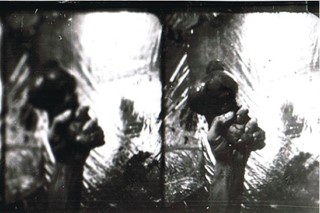 Presenting two new nights to grace London's nightlife, our faithful promoters from the Adventures in the Beetroot Field/Sexbeat/Bugged Out lot are joining forces for new audio-visual ventures by presenting the most 'exciting, mysterious, dumbfounding live acts, and obsessive-compulsive DJs, along with a range of visual collaborators'. Whilst BleeD will be a specialist leftfield electronica night held at the newly opened XOYO 'curating' acts like Oni Ayhun (Olof from Swedish band The Knife) and New York's Oneohtrix Point Never - Lanzarote is the result of an amalgamation of musical tastes from promoter/DJ Casper C and tastemakers at 508, Sexbeat and Take Courage Gallery. We speak to HEALTH's John Famiglietti before they play Lanzarote's debut date and Casper himself about what makes these nights special… and present an epic new mix from future BleeD resident and one half of Skull Juice, Benedict Bull.

Dazed Digital: What's the best thing you've seen since the last time you spoke to Dazed?
John Famiglietti: John Carpenter's They Live, Inglourious Basterds, and Eastbound and Down, Season 2 premiere.

DD: What are you most excited about at this moment?
John Famiglietti: Playing Moscow as we fly there tomorrow.

DD: Where do you think your music is going? Any particular aims or changes to your 'sound'?
John Famiglietti: All of the new songs were writing were just "goin' for it" with any idea we have.  But a lot of the new songs will be more melodic, and more bass. We want the next record to be very special.  We don't want to change our sound, just add more things it can do.

Dazed Digital: What links the artists that you've booked for your two new nights?
Casper Clark: In the case of Salem (Lanzarote) and Oni Ayhun (BleeD), one link would be that we are presenting the UK debut for the acts, in each case. I've always sought unveilings, as an element of the great unknown makes for a more exciting atmosphere, for me.

DD: What's the story behind the name?
Casper Clark: In coming up with the name BleeD, I wanted to represent a progression from my 'fun' brand, Blogger's Delight. I like to play around with words that mean several things simultaneously, and with BleeD, I was able to retain the B and the D of the parent brand, with the primary meaning relating to the effect of hearing two sound sources simultaneously, normally resulting in white noise, but at the very least, something new.

DD: Do you think warehouse spaces have more benefits to traditional club venues? Or do you think there are more issues with technicians/sound quality/facilities etc? The way forward or will you be throwing parties in both types of venues still?
Casper Clark: One of the motivations for Lanzarote was that we'd deliberately eschew any sense of decorum, or consistency in terms of venues. Sure, we're all overly accustomed to the 'secret East London warehouse' concept, but as long as the space is right and the sound-system is up to scratch, there's still something more exciting about witnessing a band outside of the ubiquity of the standard gig circuit. We're prepared to forego financial gain in favour of the 'right' context for each and every event.

For BleeD, we reside at XOYO, a nightspot which will be much talked about for time to come as it strives to make a permanent impression on the London clubbing landscape. We'll be focussing the event on the basement, which should be an adequately intense space for what we're hoping to achieve. Rest assured, the room will be filled with smoke and strobes when Oni Ayhun hits the stage, and every note from Oneohtrix's Roland will be heard as God intended... I'm a firm believer in the preservation of good, club spaces. It always shocks me when the arrival of a new space is met with negativity or scepticism. Let's embrace the spaces we have, while we still can!

DD: You've been running successful nights in Camden as well as East, do you think there is a noticeable divide of people or is it the same crowd you are trying to attract?
Casper Clark: I am always hoping to reach an open-minded audience, either by promoting events in the areas where I know the crowd will be found, or by deliberately hosting events off the beaten track in order to weed out the half-hearts. It's a wonderful pleasure to maintain a long-running residency in the Lock Tavern, keeping hold of the heart-beat of the party, our close friends, and witnessing the ebb and flow of the trend-jumpers and innocent passers-by.

DD: What are you most excited about for 2011?
Casper Clark: I'm already thinking about Field Day for 2011, after delivering our best one yet in August. To some extent, all of the paths that I furrow lead back to there ultimately, and I'm hoping we'll see our best and most challenging line-up yet, in the new year.

6. Steve Hauschildt - No Way Of Knowing

8. Teengirl Fantasy - In The Rain