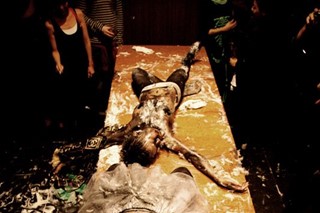 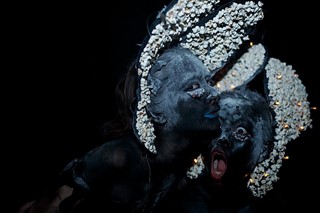 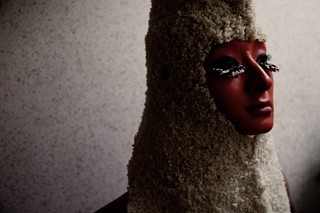 Trippple Nippples is two Japanese electro songstresses that transform lunatic delusions into performance art. This is notably done by pouring and throwing egg, glitter, feather bombs, mud, blood, rotting spaghetti dressed with liquid latex at each other, or by squirting milky alcohol showers, projected from prosthetic breasts. If these chicks haven’t covered themselves in it, it probably doesn’t exist. And the music is pretty good as well! Via Skype, Dazed spoke to Yuka Nippple, Qrea Nippple, and Joseph Lamont, the Australian mastermind behind Trippple Nippples’ music production. We discussed their fashion tactics, their favourite Tokyo hotspots, and of course, the development of their highly idiosyncratic music affair.

Dazed Digital: How did the Trippple Nippples project come about?Qrea Nippple: Four years ago, Yuka and I met accidentally at a party called MEAT in Tokyo.
Yuka Nippple: By the time they threw the second party, we decided to become the drink-serving girls, and we started performing together at the club.
Qrea Nippple: We were shooting Baileys from fake breasts made out of rubber, and we were pretending to be half human and half milking cows.
Yuka Nippple: We thought just normal drink-serving girls are not very interesting, so we made the fake tits filled with milky alcohol. Jo was in the audience, he loved it, and we started writing songs together.

DD: How did Paris affect your musical tastes?Qrea: I really liked French hip-hop in Paris. I went to so many gigs. I saw Busy P.

DD: So are you an Ed Banger Records fan?Qrea Nippple: I like them! I was making a huge, plastic sculpture. You know Ken, Barbie’s boyfriend? Yeah, I was making him for myself. I was going out with him for six months. When I was walking down the road, Busy P was passing by, and I asked him, “Oh are you Busy P? Could you take a picture with me and my boyfriend?” And he goes “Oh, are you Trippple Nippples?!” And he knew us, so I felt, “Oh, he knows me!” I was so happy.

DD: What has been the most elaborate costume-making process so far?Yuka Nippple: That was probably the spaghetti. That was our first stage of Trippple Nippples. We bought latex liquid from Tokyu Hands. We got too excited. And we made the costume one week before the actual performance day. That took one and a half days to make. We didn’t think the spaghetti would go bad. It was really rotten and smelled like cheese. It was greasy and disgusting. By wearing the costume, you couldn’t help almost vomiting. We wore it for the whole night… So my dad is an amazing rice farmer. He makes awesome fully organic rice. He’s really good at it. Every autumn, he sends me new rice. This autumn he sent me new rice, but we still had the old rice left, so we didn’t want to waste it. So again with the latex liquid we put together a rice helmets. We made a whole costume with rice. It looks really amazing, but when you put it on, it was so heavy. The rice gets really hard, and I was not wearing anything underneath the rice thing. So by the time the show finishes, my nipple got really rubbed by rice, and in the end both my nipples were bleeding. It was so painful though, really.

DD: Is there symbolism behind your costumes and performances?
Qrea Nippple: Last time we were doing some guillotine things, and we cut so many heads off balloons. The helium goes to the ceiling. Yuka was crying like, “Oh I feel so guilty for killing so many balloon heads, so I drew some really wicked, bad faces on the balloons, so she wouldn’t feel guilty for cutting their heads off. ”
DD: What were some of your most memorable performances?
Yuka Nippple: We have a lot of stories about making a mess. We played club Asia in Tokyo and our costumes were mud, just that. And we put on some blonde hair ponytails. We were just mud and blonde hair ponytail. That was our costume. It was a lot of fun as always. But in the morning when the lights turned on, the whole club was covered in dry mud. And everyone went mad, and everyone had to clean up until about 9am in the morning. We made a lot of people really upset. We didn’t mean to of course, but my bad, but I’d like to announce that we can do “Not dirty one” too! People sometimes misunderstand what we are, but we are musicians!

DD: So where did you acquire all this mud?Yuka Nippple: Amazing, amazing store called Tokyu Hands in Shibuya. It’s a department store with 21 floors of DIY stuff. We get everything from there. You can spend a day just looking for things. We found rice-field mud in a packet.

DD: What are your favourite spots in Tokyo?Joseph Lamont: There’s a party called FANCYhim, which we played last month. It’s the best party. There are a lot of good parties out of this venue called Trump Room. The guy buys a lot of his stuff in L.A., and he’s basically insane. He’s obsessed with chandeliers.
Qrea Nippple: We’ve been doing gigs at Trump Room so often.  I guess it’s so gorgeous mixed with the world of Jan Švankmajer. It’s really gothic but a little bit grotesque. And the interior of Trump Room is a bit like somebody’s secret house, so it’s fun. I have a friend who was homeless for ten years, and she used to stay and sleep at Trump Room when it was closed. Now she lives in Kansas City. Our friend Rachel, who was the organizer of the Meat Party, opened a shop in Tokyo and it’s called ilil. Her stuff is so funny.
Read More

5 albums to stream this week
MusicIncoming