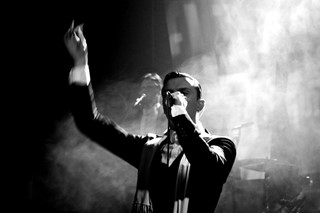 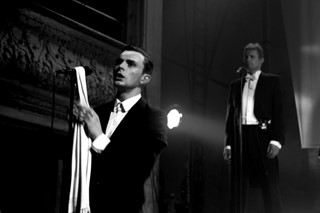 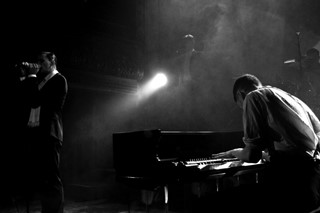 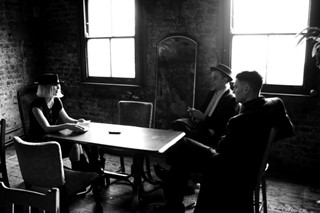 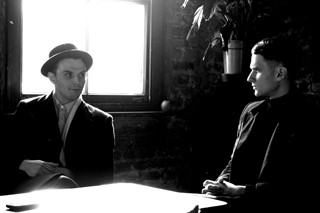 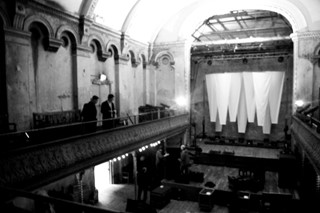 It is rare to find a new band with the power to create a live show that is so unique and so well executed, but Hurts seem to be the exception to every rule made by the music industry. They don’t fit a previous mould, or conform to the constraints of the digital age, and since Hedi Slimane shot Hurts for the December issue of Dazed, we have been keeping a close eye on their progress. This exclusive interview marks the first live performances Hurts have ever produced, and with the world awaiting their stage debut, they did everything but disappoint.

Hurts played two live shows to unveil what they have been working on for the past year, one at St Phillip’s Church in Manchester and the other at Wilton’s Music Hall in London. And over these two nights we witnessed an Opera singer, hymn sheets, white roses, theatrical lighting, a mind-blowing performance, and most importantly 8 dazzling new songs.
There is no denying that this band are part of the machine, but they have somehow managed to create a world that feels so far removed from the sterile environment of pop songs and big budgets that you really have no choice but to believe in what Hurts are trying to say. Their world never seems contrived, and the precision that has gone into these performances can only be applauded…and this is just the beginning.

Dazed were given a window into the secretive world of Hurts for the first time, and witnessed a live show that could put most established artists to shame. We wanted to find out why creating a completely unique show was so important to Hurts and whether or not they have been able to achieve it. Whilst the crowd didn’t know any of their songs, for some reason it didn’t matter. We watched as hundreds of bloggers, industry moguls and music lovers filled the room to witness one of the most interesting live shows of this year.


Dazed Digital: How was the show in Manchester?Hurts: It was great, it was just six months of tension, six months in the making, but it all paid off. It’s one of those things, if you over plan and over analyze, even if something goes wrong it is still going to be fine.
Dazed- So this really was the first ever show?
Hurts- Yes, it was really cool. We picked to play in a fully functioning church and some woman came and shouted at the vicar that we were playing devil music but apparently she had a very long history of mental illness. It was an amazing place to play, but it felt strange, we’ve never played a gig to people who have actually wanted to come and see us play.

DD: When we met last year you told us how you wanted to create a live show that was a separate entity to the music, something unique. Do you think you have been able to achieve this?Hurts: I think so. Playing in places like this makes a difference and making it a unique experience for people is important, I think they value it more. We have spent a long time on the visual side of things, in Manchester we had hymn sheets with the lyrics on.
DD: And you have an Opera singer…Hurts: Yes, he will be in the show tonight. We have tried to look at each show separately, like the church in Manchester was one thing and this show will be different.
DD: Is it true you bonded over a love of Prince?Hurts: That sounds very homoerotic, but completely. His attention to detail is unparalleled and he is a genius. His whole idea with live performance is so important; it’s something that has been lost. People have been given so many options, it’s like a conveyor belt, the same old bands playing the same crap venues, and it feels like now people don’t want that. They want something they can treasure. I feel like we have been in no rush to play live, the show in Manchester was better than 20 bad shows.

DD: What else has influenced the live side of Hurts?Hurts: Like with Depeche Mode, there is ambition to make it different and to make it special. I guess they are a different calibre of act, but there is no reason why you can’t put the same amount of time and effort in if you are a smaller act at a lower part in your career. If you create something unique for people they appreciate it, and it costs the same as a normal gig. Although it does take it out of us, we could have delegated, or just not bothered, but we know it will be worth it in the end.

DD: Are you excited about the show tonight?Hurts: We can’t wait. We only gave people a little bit of us, so tonight people are coming to see what we are about. And because we are so confident and comfortable in what we have to present, we can’t wait to just show the room what we have. It would be horrible if we were sat here with only one song, but it’s like opening the floodgates as everything has been held so close to our chests for so long.

DD: Has it been difficult to keep your music so far removed from the rest of the world?Hurts: It has been a bit difficult, but it is more fun, and it means when we finally do put something out we are completely happy with what part of Hurts we have let out. When we put the ‘Blood Tears and Gold’ video online it said everything we wanted it to say. It’s funny, when we write something that we think is brilliant you never really know how people will react to it, because we are not on the conveyor belt of playing shows and writing shows together, like every other band. Now every time we play a song it transports us back to the moment when we wrote it.
DD: What made you chose this venue?Hurts: We chose the church first because I used to walk past it everyday on the way to university, and I always imagined that one day I would ask if we could play there. And then this venue (Wilton’s Music Hall) we had heard about from someone, and everyone kept suggesting different places but none of them were good enough. We didn’t even mind if it was outside London and people would have to travel, as long as the venue could enhance the performance. I went to a gig at the Rivoli Ballroom in South London and that kind of inspired me to find somewhere unique, you just need to put in some extra effort to find a venue that can become part of your performance.
DD: Would you consider playing the recently re-opened Factory Records club in Manchester?Hurts: We can’t really say too much about that. It’s kind of like a museum, on the opening night all the family got together and did a gig. I don’t think it is really our thing, but Manchester has such a heritage, I think it’s hard to get away from that, but right now re-opening Factory doesn’t seem progressive. But there are exciting new bands coming out of Manchester like Everything Everything and Delphic, and we are all very different but can exist on the same platform which is good for the city.
www.informationhurts.com
See Hurts in the latest fashion in the April issue of Dazed. Out March 18th.
Read More