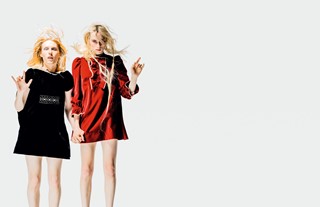 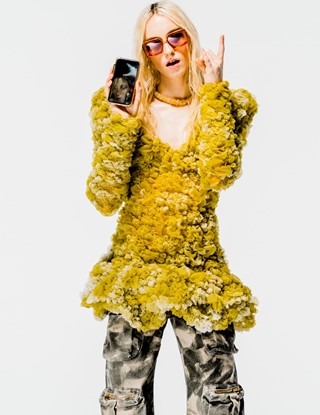 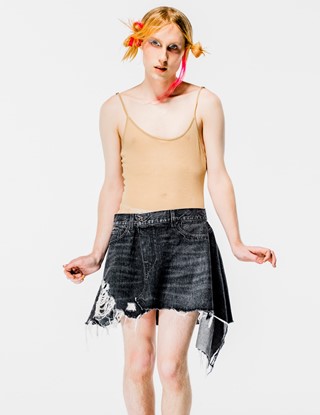 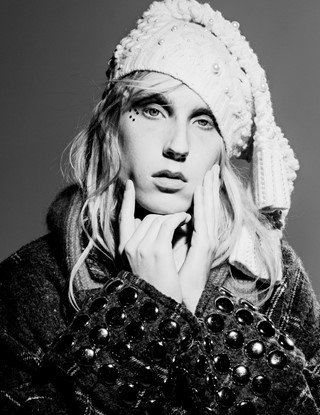 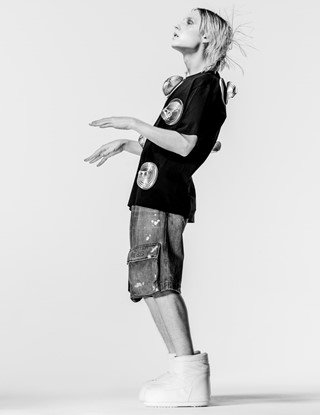 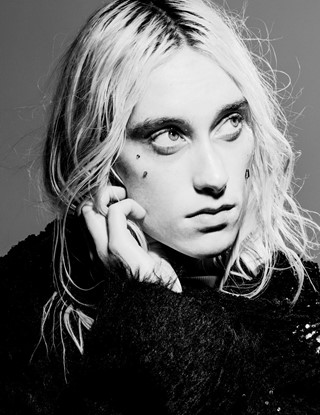 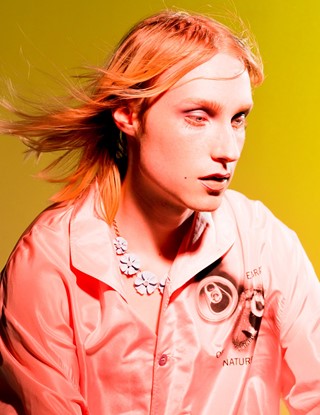 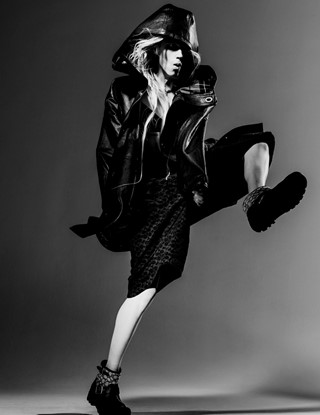 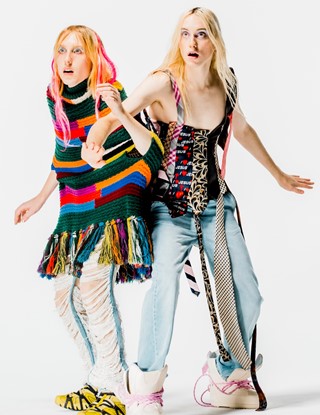 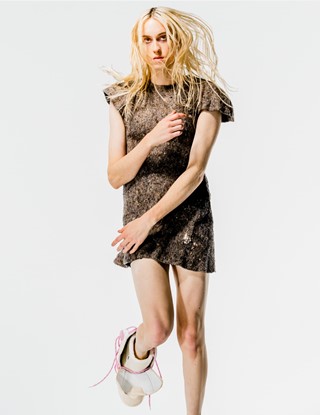 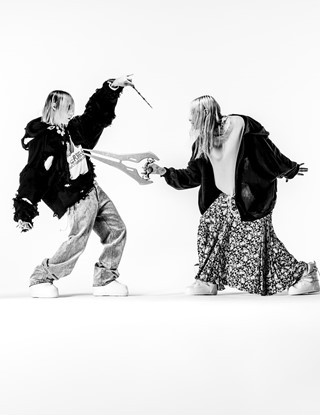 Taken from the winter 2022 issue of Dazed. You can buy a copy of our latest issue here

St Louis, Missouri is home to the longest outlet mall in the world. Situated just off Route 370, it was once a beacon of commerce: a multi-level metropolis of fast food and fashion chains, an antidote to the bleakness of suburban life. But, like thousands of malls across the country, decades of economic decline forced its closure in 2019. “There wasn’t anything to do,” says Angel Prost, “so we stayed indoors.” She’s referring to Lulu, her younger sibling and the other half of pop duo Frost Children. Together they were raised in St Louis, nicknamed by locals as the shopping outlet suburb of Missouri. But while other kids hung out at the mall, Frost Children found a new, spiritual home: the internet.

Speaking over Zoom from their shared apartment in Ridgewood, Queens – “we use Lulu’s room as a studio”, they say – the pair are part of a new cohort of artists to come out of New York’s downtown scene. Emerging out of the pandemic, these extremely online creatives and tastemakers span the worlds of fashion, art and media, with savvy internet personalities that spill out across Substacks, podcasts and meme accounts. “I’m definitely a hyper-online person,” Angel says. “I’m really posting a lot on my story on Instagram these days; it’s almost like I live-journal every thought I have. I honestly don’t see any problem with it.” Her TikTok is also an extension of these daily reflections, laced with the sort of based and irony-pilled musings that flourish online. “These are real thoughts I’m having, it’s not like I’m being tarnished and my brain is dying from hyper-posting. It’s just a medium, like writing in a journal, but it’s going on to the internet.”

Online and IRL, the downtown scene isn’t defined by one style or sound, but rather encompasses an entire umbrella of art, ideas and cliques. With Dimes Square’s micro-neighbourhood at its centre, there’s a self-sustaining ecosystem of artists eager to collaborate. Angel recalls meeting Blake Ortiz-Goldberg AKA Blaketheman1000, the rapper behind the much-hyped track “Dean Kissick”, over DMs after he read one of her articles in the sceney local paper The Drunken Canal. Ortiz-Goldberg now co-manages the band, conducting weekly meetings at Ming’s Cafe on Canal Street. “There’s an infinite amount of scenes here: the Dare-Strange-Ranger-Porches world, the more ravey Rash-Club-Cringe-Heaven DJ thing,” she says. “We operate in both worlds simultaneously. And they’re really happening right now.”

Balancing on the cusp of the underground electronic scene and the burgeoning indie revival, Frost Children’s music is hard to pin down. It’s the sort of terminally online, remix culture- influenced sound that in 2020 would have been labelled as hyperpop, but has since mutated into a fluid style that spans everything from synth pop to punk rock and hardstyle. “Lately when we’ve been asked what kind of music we make we just say it’s confidential,” says Angel, “but other times we’ll just say that we’re emerging pop artists.” Inspired in equal parts by golden-era YouTube and 00s kids’ TV shows like iCarly, their tracks are imbued with a playful Web 1.0 earnestness, with glitched-out soundbites and YouTube poop samples hurtling the listener into disorientating states of digital disarray.

“The cycle of referential art is increasing so fast in terms of music,” says Angel. “I saw a tweet, it said: who’s gonna do the hyperpop revival? [Like] ‘Wow, this beat is so 2020 hyperpop.’ We all know what that means and what it sounds like. But 15 years ago we would say this song is so three years ago. You would have to have been really high up in the pop production iceberg to know what that meant. I’m curious to see what’s gonna happen when it collides on itself.”

The pair are already known for their raucous live shows: it’s not uncommon to see them stroll on stage with a gigantic pair of smiley, papier mache Mesaryth stars, (the official Frost Children emblem) or don inflatable SpongeBob costumes and battle-rap each other as part of their side project, YourBoySponge. “I think our approach is whenever you’re given the opportunity to do something, do it to the maximum,” says Angel. This is true of the pair’s stage presence, which better resembles a big-room DJ than an emerging pop act. They credit this to years watching EDM shows like UKF Dubstep and Ultra Miami. “Angel was Deadmau5 and I was Skrillex,” says Lulu, grinning. Angel adds: “Those shows have influenced our style in how we perform as if we’re on that stage, even if it’s a room of 200 people and we’re not necessarily playing that type of sound.”

Despite the fact that we’re speaking through a computer screen, the conversation doesn’t feel awkward – it’s no different than speaking to a regular internet friend. “Our onstage character is this thing in our heads that we can turn on and off at any given point,” says Lulu. Together they have an almost hive mind-like rapport, the kind that can only come with being close siblings. “We grew up together, we live together, make music together, perform together, go on tour together. It’s always just chill,” says Angel. “But we did have competitive YouTube channels at one point.”

Frost Children played some of their formative shows in quarantine, DJing at Zoom nights such as the LA-based Subculture, and their hyper-online music is paired with a distinctly URL aesthetic designed to smash-and-grab the attention of even the smoothest brains. But making music that reflects the frenzied pace of the internet isn’t an easy task. Trends move faster than memes and fall victim to the eternal scroll. This is something the pair want to combat with their upcoming releases, SPEED RUN and HEARTH ROOM. “It’s the arc that an artist has over a lifetime, but compacted into two quick albums,” says Lulu, who says SPEED RUN is “the-pop-artist-big-ego-paparazzi” album and HEARTH ROOM is its “ego-death-lifestyle-moved-upstate” companion.

That night, Frost Children play a show at the two-year anniversary party for zeitgeisty newsletter Perfectly Imperfect, alongside a cast of downtown faces including indie darlings The Hellp and PC Music’s umru. The pair’s set zooms at lightning speed, a sensory overload of memey ideas and catchy melodies that burrow deep into your skull. “The lifetime project of music is creating so many different vibes, arcs and phases in a short amount of time that it’s almost unfathomable,” says Angel. “That’s a really cool way to be a performing artist in the post-internet era.”