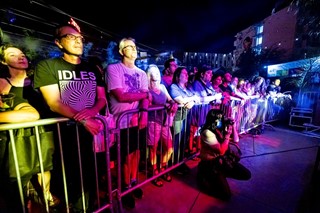 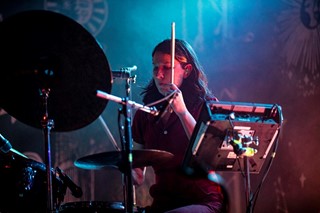 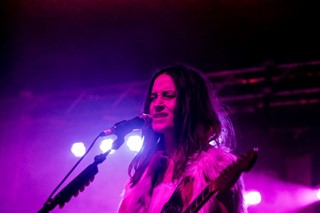 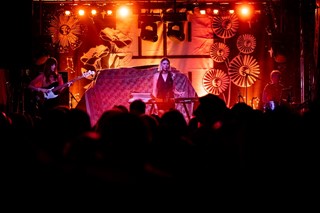 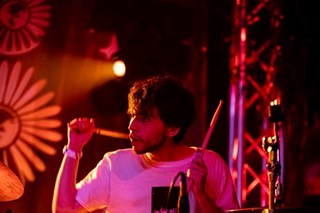 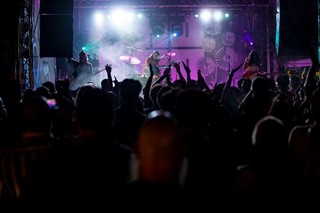 Hotel Congress, I am warned, is not for sleeping. The website, concierge and local business owners in downtown Tucson, Arizona all agree that if it’s a good night’s rest you’re after, you should probably check in elsewhere. Not because of the paranormal activity – though, as one of the “most haunted” hotels in the US, there’s plenty of that. Rather, there’s a club on the first floor that goes until 5AM, a jazz lounge slash mezcal bar next door, and the building backs out onto the bustling Congress Street, which runs through the heart of the city’s cultural centre. “Hotel Congress?” the cashier at Ace Hardware grins when I go searching for a battery pack, raising an eyebrow like she’s foreshadowing something at the start of a slasher film. “It gets pretty wild over there.”

She wasn’t wrong. But I should say first that Hotel Congress is almost unreasonably beautiful. It’s been standing for 104 years and the interior looks pretty much the same as it did in 1934, when John Dillinger was captured after a fire in the basement spread up to the third floor where he was staying under an alias. The lobby is covered in Southwestern-style stencilled frieze done by the late Larry Boyce – famous for decorating his way around the country by bicycle – who showed up one afternoon in the mid-80s and asked to paint the ceilings. Several people have died here, including a handyman called Vince who lived on-site for 36 years and fixed things with a butterknife. A young woman having a nervous breakdown shot herself in a closet during a stand-off with police (you can still see the bullet hole in the wall), and another man threw himself off the roof, or died on the roof, I forget which. Rooms 214, 220 and 242 are all occupied by ghosts. A guy at the bar with quick eyes and a frozen smile, here on business, tells me he was “visited” by one of them and shown a vision of hell. Hotel Congress has an inescapable sense of history and place, is what I’m saying, which makes it a great location for a music festival.

Since 2004, Hotel Congress has been home to HOCO Fest – a three (now four) day music festival launched by the hotel’s entertainment director David Slutes with the aim of celebrating local culture. The line-up was mostly geared towards borderlands music – Norteño, Corridos and Mariachi, born from the confluence of traditions along the Mexican-US border – with everything from the food to the energy supply organised with a sense of responsibility towards Tucson’s community and environment. In 2007, Slutes took advantage of the relentless summer sun (if you go you will hear the phrase “yeah, but it’s a dry heat” at least twice a day) to make HOCO the first completely solar-powered festival in the west. 18 years on and that ethos has only grown stronger, fuelled by the intense socio-political changes of the last decade – both globally and at home – and a spirit of collectivism shared by those involved.

As a relatively small city that lags behind larger metropolitan hubs like Phoenix, Los Angeles or San Francisco as far as gentrification and isolationism are concerned, Tucson is in the unique position of being able to adapt to current pressures – water shortages, supply chain issues, unaffordable housing – with a more sustainable future in mind. These pressures are noticeably at the forefront of life here, heightened by the fact that Arizona is currently one of the most moved-to states in the US, with more mass migration from urban areas predicted over the next decade. There is an understandable need, then, to establish goals and boundaries now so that the city can continue to evolve rather than collapse under the same problems that prompted people to move there in the first place. “Tucson is big enough to make a global impact but small enough that many community members know one another, hold each other accountable, and – mostly – share a common optimism about the future of the Sonoran Desert,” explains HOCO’s director, Matt Baquet. “The willingness to collaborate is unlike any other city I’ve worked in, and you can’t deny there’s a ‘Wild West’ mentality in Arizona with people thinking outside the box, taking risks.”

Born and raised in Tucson, Baquet has been the director of HOCO since 2017, retaining Slutes’ original ethos while giving the programme a more international scope. This year, the line-up boasted local favourites like Latinx oddballs Los Esplifs, 60s rock legends Los Dug Dug’s (famous for being the first Mexican group to sing in English) and Cuban-American rap queen La Goony Chonga alongside big names like Warpaint, Fucked Up and Arooj Aftab. For obvious reasons, it was the first HOCO since 2019, and the festival has been lightly reshaped by the pandemic. While the last edition was spread over multiple venues, this time everything was centred around Hotel Congress – but that only heightened the close-knit feel at HOCO’s core. Wandering between the club, the jazz lounge, the outdoor plaza and the lobby – packed with rotating exhibits from local artists, tables from grassroots organisations like Sonoran Prevention Works, and tattooist Diabla Ink offering flash – it’s physically impossible to not be immersed in the event, and by extension the city itself, at all times. Whether you get talking to an artist at the bar or a jewellery maker in the bathroom, everyone is connected in some way, making HOCO feel less like your typical boutique festival and more like a street party.

Traditionally when you try to put someone on to a festival they ask what “kind of music” it does, but it’s impossible to describe HOCO in a nutshell. I spent four days bouncing between intense rap duo Armand Hammer and goth punks Silent, trippy Taureg songwriter Mdou Moctar and doom harbingers King Woman, a powerviolence outfit called Pig City and a local jazz man by the name of Arthur Vint leading a band covering songs from Spaghetti Westerns. None of it was comparable, and yet it made sense under the same roof. “We book uncompromising artists, open-minded individuals, and optimistic visionaries,” says Baquet, whose equally eclectic career has taken him from event managing LA’s UNION nightclub (now called Catch One) to production gigs with Gucci in New York and back home again. “The goal being to grow this community beyond Arizona, and across borders.”

“The willingness to collaborate is unlike any other city I’ve worked in, and you can’t deny there’s a ‘Wild West’ mentality in Arizona with people thinking outside the box, taking risks” – Matt Baquet

Located in the Sonoran Desert, 60 miles north of the Mexican border (and, now, “The Wall”), Tucson has the longest agricultural history of any state in the US. Arizona itself is the oldest inhabited region in the country, with indigenous people cultivating the land here for at least 10,000 years. With that in mind, HOCO ticket holders were given free access to Regenerate AZ – a summit featuring talks on food supply during the water crisis, regenerative agriculture, and sustainability in the music industry. Speakers included first nations farmers from San Xavier Co-op, first-generation farmers from Awareness Ranch and Arizona SOL L3C, members of non-profit organisations like Canelo Project and loads more – all talking about things like how to grow food and use water in a circular way that goes back into and benefits from the land. Considering the omnipresence of corporate conferences on sustainability, where people from BP and Amazon et al get together and talk about how to fix the world by doing something – when they could help right now by simply not existing – it was refreshing to come away feeling like change was not only possible, but underway.

Many of the groups from the summit had a presence at the festival too. Awareness Ranch were on site, working on a comprehensive waste sorting programme that brought in a tonne of recycled aluminium, glass, and plastic, and three cubic yards of compost – which, Baquet tells me, “is currently cooking in the sun 30 minutes from the Hotel Congress and will be growing food in the next six months.” HOCO has also committed to a carbon-offset campaign, planting a tree for every traceable flight taken by artists, press, and collaborators. Next year, they’re hoping to reimplement solar power and use any non-recyclable materials to build an “art installation and/or nursery structure” at Awareness Ranch – a large plot of cooperatively farmed land in the Sonoran Desert. “If a festival can't deal with its own waste,” Baquet says bluntly, “then they should scale back.”

It’s a fundamentally anti-capitalist approach, working from the understanding that “better” rarely means “bigger”. While festivals overwhelmingly become about the experience as much as the music, offering anything from four-figure rental Tipis to a blow dry bar, HOCO strips the concept back to basics – and does them well. The only way Baquet sees the event growing is in spirit. “I like the scale we ran at for 2022,” he says firmly. “Quality over quantity. 1,500 max capacity per day, focused on attracting the right people and creating a memorable experience for all. No VIP, accessible pricing, less waste, more connectivity... I think this is the same mission we have for Tucson as a whole.”

Crucially, the messaging around the festival doesn’t feel sanctimonious or tacked on. After all, this isn’t an international credit card company setting up shop in one of London’s “premiere green spaces” for a month and giving you a pound off your pint if you use the same cup. This is a holistic event built from the ground up, and any talk about community or composting feels like a naturally occurring element – like neck sweat or amp feedback. It shows that the desire to reach people beyond city limits doesn’t have to come at the expense of the communities within it, provided you get your head right and your priorities straight. “During the pandemic break from entertainment, we were faced with reality and forced to ask ourselves what are we really producing these big events and concerts for,” Baquet reflects. “How does it positively impact our children and the greater Southern Arizona community?” These are questions that policy-makers and larger-scale events organisers would do well to ask themselves in the UK, where we’re decent at recycling but often actively hostile towards our local communities and cultural heritage.

“We came to the conclusion that if we’re going to create these platforms and have the opportunity to amplify arts, culture, ideas etc, we also need to amplify real challenges,” Baquet continues. “At the same time, we need to be providing solutions, and trying to create a model in our tight-knit community that others can apply elsewhere.”

It feels like HOCO could signpost the future of music festivals the way Tucson could signpost the future of city living. Everything is put together with intent, respect, and a lot of laughter. Not a big brand vendor, “have you got the right wristband” or infinite toilet queue in sight. Closing out the Saturday night, a member of the local DJ crew Sonido Tambo prompted the crowd to “make some noise if you’re glad to be alive right now!” and there was a big cheer. Then they said, “make some noise if you’ve seen a lot of hot people this evening!” and there was a much louder cheer. And, at the end of the day, if that doesn’t encapsulate the essence of a good fucking festival, I don’t know what does.