The xx guitarist discusses his first solo album, facing his demons and finding the humour in trauma 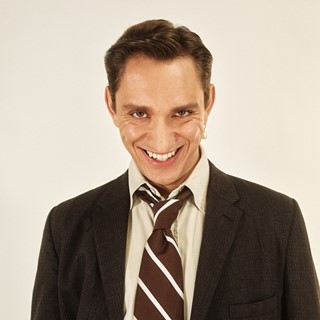 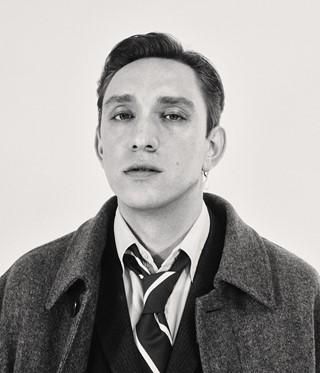 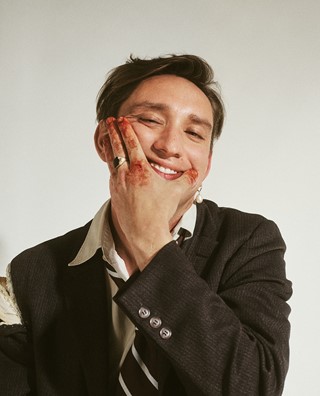 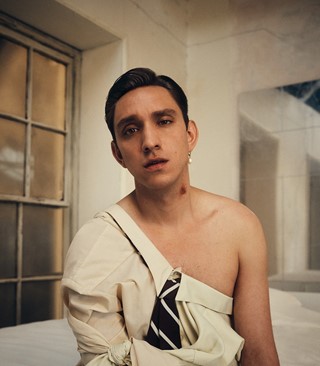 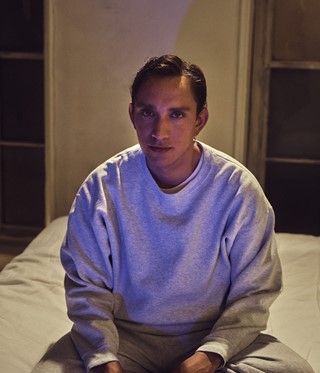 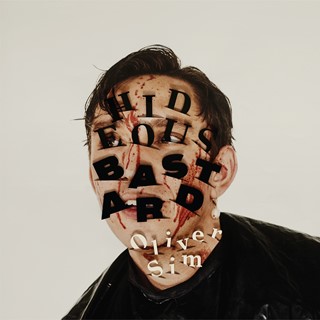 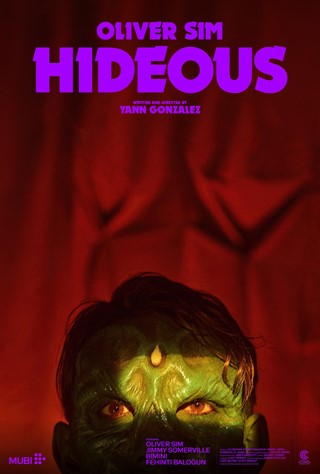 “I’m still a manic Mary,” laughs Oliver Sim, “but I’m not as overwhelmed as I used to be.”

Sim, of The xx fame, has been on quite a journey this year: he’s revealed that he’s been living with HIV since he was 17 and he’s announced his first solo album, Hideous Bastard – marking his first record independent from his bandmates Jamie Smith and Romy Madley Croft.

Sim had never planned to go solo but seeing Smith and Madley Croft release their own music, and how it benefitted the band, encouraged him to venture out on his own too. His resulting album feels like something of an exorcism; a purge of all the things that make him feel bad about himself, and have until now been kept locked inside. If this sounds heavy, it is – but also, it isn’t. The accompanying film Hideous – a horror starring Bimini, Jimmy Somerville and Smith, directed by Yann Gonzalez – explores his HIV diagnosis, as well as his feelings of fear and shame, with a kind of humour, levity and camp.

This whole process of this exorcism has been cathartic for Sim; bringing these things into the light, he says, has made them feel less overwhelming. But the album is perhaps a purge of a different kind too; of the creativity and the ideas that he’s been unable to express as part of The xx – like Smith and Madley Croft with their independent projects too. Sim has been able to explore his love for horror and speak to some of his idols, like Somerville, Elton John and John Grant.

Here, he delves into his process, his birth chart, and how he learned to find humour in trauma.

This album feels a bit like an exorcism. Tell me about that.

Oliver Sim: It’s about fear and shame – the stuff that makes me uncomfortable about myself, makes me feel ugly, or like I’m unlovable in some way. Making an album about these kinds of things is kind of the opposite of shame. It’s not hiding or trying to conceal them, it’s airing them out, to feel a bit lighter and less overwhelmed by them. I see this, the whole process of exorcising these things, as embracing my little monster – the hideous – in the bid of feeling less hideous.

Has it been quite liberating?

Oliver Sim: I haven’t had any ‘flipping switch’ breakthroughs. I’d love one but haven’t had any. But I have noticed a slow-burn change. Even being here, talking like this, is something I couldn’t have done three or four years ago. That’s a good marker of stuff shifting. But I still have fear, I’m still a manic Mary, I’m still anxious. I still have shame as well. And I’ve had moments of feeling uncomfortable, but I’m definitely not as overwhelmed as I used to be.

I think I have like a more balanced view on things like shame too. When I started writing this music, I thought shame was the end to all that is good – it’s the enemy, it’s the devil here, it’s preventing me from doing so many things. But to be shameless isn’t necessarily a good thing. Sometimes shame keeps us safe and prevents us from doing things that we don’t really want to be doing. And shame can be hot; it can be attractive. George Michael is the perfect example of someone who turned shame into something really creative and celebratory – and really attractive as well.

What has it been like navigating this stuff in the public eye?

Oliver Sim: I don’t know when it became such a responsibility for a musician or anyone in the public eye to be a voice on so many things. So many artists are like life coaches now. But I’m not equipped; I’m not a healthcare professional. When I decided to release Hideous and reveal my HIV status, I went to Terrence Higgins Trust, and was like, ‘OK, what’s all the information I need to know? What’s the most up-to-date information? Like, what do I do?’ And they were just like, ‘hold on, you don’t have to be that person, that’s what we’re here for.’ That was so freeing.

“When I’m being serious and taking myself very seriously, I get totally overwhelmed... You have to laugh. It sounds like a magnet you’d put on your fridge – but it’s true, you do” – Oliver Sim

How’s it been doing things solo? It must be quite an adjustment for you.

Oliver Sim: Yeah, The XX is a unit. It’s a meeting point between three people. So it does feel more vulnerable. And it’s made me really appreciate being in a band, I love the dynamic of that. And I didn’t make this record out of a dissatisfaction with that at all. When Jamie made his solo record it changed the band for the better. And I think that’s what Romy and I are trying to do as well. But I’m in one of my favourite bands, with two of my favourite people, so that is my priority, that is my home. And I found it really uncomfortable in moments being on my own. But I’ve also really enjoyed parts of being a solo artist as well. Like, I made this record with Jamie, but when we worked on it, it was very different to how we normally work because we didn’t meet in the middle – he came to me. He took a step into my world.

And then you killed him off in the film!

Oliver Sim: And I killed him off!

How did he feel about that?

Oliver Sim: I told him at the beginning and he was like, ‘I love it.’ He practised his scream in his car for a few days before. I loved being able to do that. But making this has made me very excited about making more music. Romy is finishing her album at the moment, and it’s so good. She’s going to a very different party to the one I’m going to with this record.

Oliver Sim: Her party is… and I say this with such excitement and admiration, it’s like a Euro dance party. I love it. It’s very her. It’s a world we both love. I don’t know what my party is, but it’s not that. But now it’s like, what the hell is the new middle ground between the three of us? I have no idea but I’m excited to find out.

Maybe it’s like all your flavours have gotten stronger. Independently. So then together it’s going to make a richer, spicier curry.

Oliver Sim: Yeah, forming our own identities will enrich all that flavour...

What do you think you’d be doing if you weren’t doing music?

Oliver Sim: I quit my job at Costa Coffee to make our first album because I didn’t get into art school. I wanted to go to Saint Martins and Romy got in and I didn’t, which was a real sore point. Bastards. So I don’t know. I really don’t know where I’d be. Yeah, I have no idea.

Do you ever get nervous on stage?

Oliver Sim: Oh my god, yeah, really nervous. I’ve only played a handful of shows on my own and not being on stage with Romy and Jamie… Romy joined me on my London show for two songs and the moment she stepped out, I was suddenly like, ‘OK, I suddenly feel more… I’m not a born stage performer, I took some time to get into it. I think it’s that Gemini thing of like, ‘look at me. Don’t look at me. Talk to me. Don’t talk to me.’

Intense. Your film has a lot of horror references – why do you like horror?

Oliver Sim: I’ve always been a bit of a fearful person but horror doesn’t necessarily scare me. I think there is a level of control in watching a horror film, in that these aren’t necessarily my fears – I’m not scared of monsters, ghosts or serial killers. I’m sure it’d be scary if I saw one but that’s not what keeps me up at night. It’s loneliness and relationships that do that. Also, horror can be fun, campy, funny and meaningful.

But I think the thing that really drew me to horror is the characters. There are two categories: the one I call female rage, which is the women who are very beautiful, feminine, and sexy, but also angry and strong. I put Sigourney Weaver in Alien in that category. And Jamie Lee Curtis. They have those qualities that me as a kid was like, ‘that’s what I want to be. I’m not allowing myself to be this, but I feel like I have that fire inside of me.’

And then there are the monsters. The villains. The Norman Bates, Patrick Batemans and Buffalo Bills. They seemed more relatable to me. I wasn’t an action hero, a superhero or a Disney prince. But those monsters were being cast away or chased out of town for something that was different about them. And they’re allowing themselves to be angry and take it out in the world – they are just so much more exciting. There’s now a trend in cinema of doing the origin stories of villains like Joker, Cruella and Maleficent. They’re not doing that for the Disney princes because, like, who the fuck cares how you got so handsome and brave and kind? Boring. I want to know how this person got so twisted. That’s way more interesting.

You reached out to some musicians you like, when you were making this album – can you tell me about that? What did you learn from them?

Oliver Sim: Yeah I’ve made an effort to reach out to lots of more experienced queer artists, like Jimmy Somerville, Elton John and John Grant. The common thread with them all is that they are very fucking funny. They are all hilarious. And they’re all quite savage about themselves and have this ability to be quite dark but also very funny. They’ve all encouraged that in me as well, which is good. Because I really do value a sense of humour. When I’m being serious and taking myself very seriously, I get totally overwhelmed, because the world feels huge and very serious and scary. And I think that is a reason why all of these people have survived and so successfully survived for so long. You have to laugh. It sounds like a magnet you’d put on your fridge – but it’s true, you do.