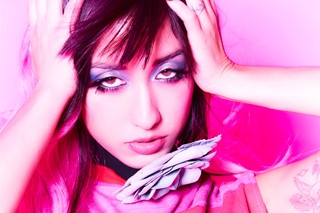 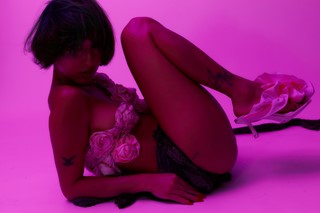 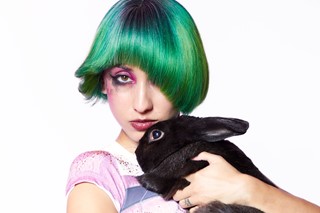 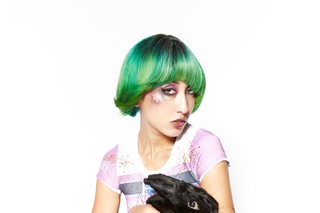 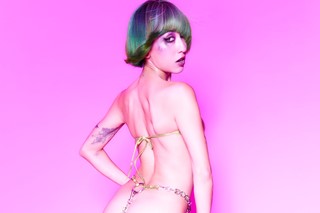 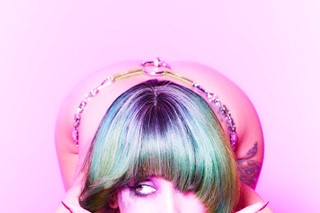 If Isabella Lovestory had to describe herself in three words it would be: chaotic, cheeky and carefree. The Montreal-based pop star is a formidable internet presence, known for her playful online persona that combines on-screen sass with post-ironic fashion choices, from graphic tees to light-up stripper boots and blinged-out snapbacks. Her music videos transport listeners into surreal worlds in which Miu Miu kitten heels run amok and raunchy choreographed numbers recall 00s MTV, where bass-heavy reggaeton brushes alongside glossy pop melodies and blasts out instant sex appeal.

Born in Honduras to creative parents (her father was a radio DJ who introduced The Smiths and The Cure to Honduran radio), Lovestory moved to Virginia at the age of 13, before eventually settling in Montreal. “You know how in the world you’re a persona of yourself? That’s what Isabella Lovestory is to me. It’s the most me; it’s something that I’ve wanted to be since I was little, a superstar,” she begins. “At the same time I like it to be a performance – and I play into that.”

For Lovestory, building fantasy worlds has always come naturally. Growing up, she remembers hearing distorted reggaeton blast out the radio of passing cars (“reggaeton makes you feel ferocious and sexy, it’s like a mating call”) and endless hours sitting in front of the television watching Y2K pop icons such as Britney, J-Lo and Christina on MTV. She describes her teenage years spent scrolling through Tumblr and listening to the likes of Uffie and Crystal Castles. “You’re exposed to all these different things, different music, which all microwaves in your brain and translates into music, where it becomes a mix of sounds and languages and genres,” she says.

Her debut album AMOR HARDCORE layers early 2000s reggaeton with the era‘s provocative pop. “They are all very romantic and sexy songs, but I wanted them to feel really extreme too,” she explains. Whether it’s obsessing over clothes until you end up in a straight jacket on lead single “Fashion Freak”, or dialling up the heat on the explosive “Cherry Bomb”, there’s a theatricality to the record, with lyrics that explore the complexities of female eroticism. The accompanying music videos, many of them self-directed, intend to pull the listener deeper into Lovestory’s sumptuous universe, populated with flashing neon lights, juicy cherries, and shiny belly button piercings. “I’m a very visual person,” she says. “I like to create an image in people’s heads and what they’re listening to.”

With stories of love, sex, rage and ecstasy, listening to AMOR HARDCORE, Lovestory explains, is like falling in love – “when you’re so sick to your stomach that you could burst”. It’s frenzied and immediate-sounding, grabbing your attention and refusing to let go. “I think that there's beauty and complexity in the grey zone, but aesthetically and sonically, I like extremes,” she elaborates. “But my personal way of seeing extremes is that it hits harder.”