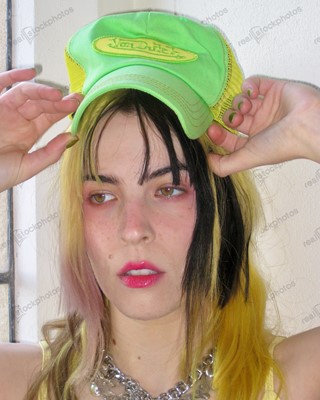 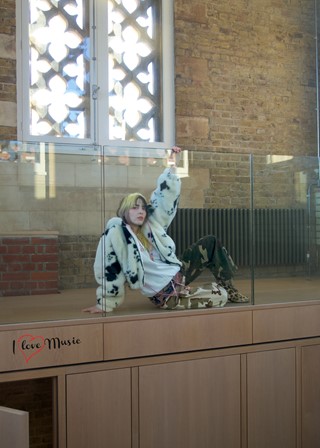 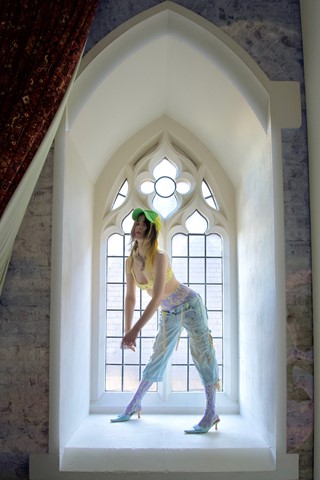 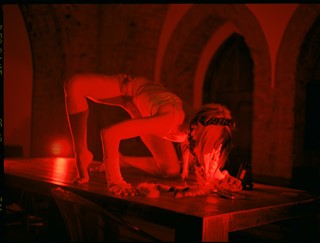 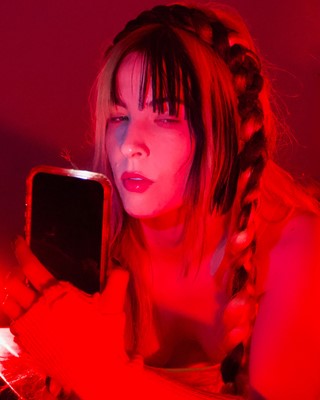 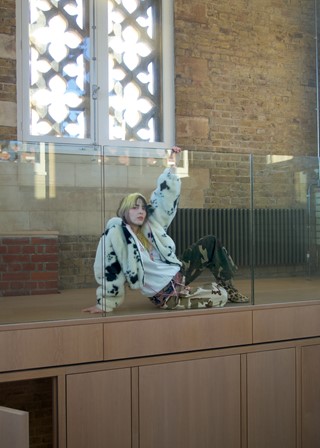 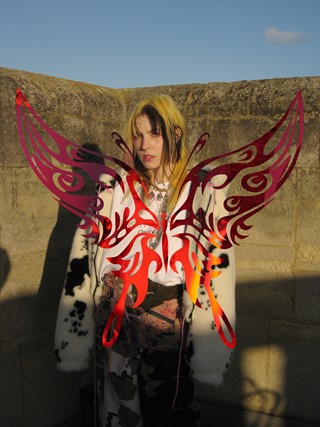 It’s December 2021, and Dorian Electra is preparing for their third studio album in a converted church in Hackney, London – or, as we call it, Dorian’s dungeon. It’s an eclectic crowd: British producer Count Baldor, The Horrors’ Faris Badwan, and emerging hyperpop star twst huddle around a microphone. Clarence Clarity, a longtime collaborator of Electra’s, slinks out the room he’s spent the best part of four days locked in, conjuring up tracks. The group begin swinging their arms from side to side, belting out an ancient, Viking-esque melody that worms its way down your ears and runs circles in your skull.

Later on, Shygirl producer Kai Whiston, songwriter Will Vaughan, and PC Music’s umru and Easyfunn show up. In any other situation, this would sound like the premise of a niche online joke. But we’re here as part of a six-day intensive writing camp, one of several Electra has staged in recent years. “I like to use the ADHD to my advantage, where you’ll literally hear something through the walls, a baseline in the other room, and you’ll get an idea for a melody,” the Texas-born, LA-based artist explains. “It's having all this like additional stimuli. It just helps you from getting stuck and myopically focused on one thing.”

A sonic shapeshifter, Electra’s music is a genre-hopping mash-up of maximalist sounds and textures that pull from across the dance music spectrum in a way that feels ironic yet undeniably sincere. Despite their flamboyant on-stage persona, they have a knack at cultivating a chill and unpretentious atmosphere that puts you immediately at ease. They give people the space to be creative without it feeling overbearing, while their knack of cherry-picking like-minded people – esoteric nerds and oddballs from across the musical landscape – makes you feel a part of an eccentric family, or a troupe of Dungeons and Dragons players about to embark on an epic conquest. “I get really bored of things that aren’t extreme in some way,” Electra confesses. “The things I get the most excited about are the things that are so uncool that nobody wants to touch.”

A kind of sonic LARPing, there’s an epic theatricality to the music, which is informed by fantasy, folklore, and historical revisionism alike. Each track is like a sonic sneak attack, with sugary pop hooks swinging through to MIDIevil breakdowns and heroic synth stabs. Metal-inspired melodies and Gregorian monk chants take a left spin into ye olde choruses and barbershop quartets. It’s this ethos of pushing things to the extreme that informs their process. “I don’t like taking things too seriously,” they explain. “Having self-awareness but also deep sincerity. It’s that whole beyond based and cringe thing. Like, you’re not afraid to be cringe in what you’re doing.”

Following on from their 2019 debut Flamboyant, Electra is currently embarking on their My Agenda tour, which comes months after the release of last year’s My Agenda deluxe edition – an extended version of the 2020 album. On the tour website, the ominous logo of a fictional corporation DrinkTheWaterTM redirects you to a page where a video game-style avatar of Dorian hovers over the industrial sludge of a chemical plant. It’s meant as a reference to alt-media conspiracist Alex Jones’ theory that chemicals in the water are turning the frogs gay. It’s also the inspiration behind Electra’s most recent My Agenda music video, featuring gay icons Village People and Pussy Riot’s Nadya Tolokonnikova.

In the video, a shadowy corporation funds a coup facilitated by the queer furry militia, who use the water as a weapon to forcibly turn people gay. “It’s taken from the perspective of somebody who’s scared of this conspiracy theory of gay people taking over and indoctrinating everybody,” Electra says. “It’s a conservative’s worst nightmare.” As the video continues, Electra rides a gay bomb onto the streets of New York, which erupts into a rainbow mushroom cloud. A mass of mutating frogs burst onto the streets before merging together into one giant, gay Pepe that tramples the city Godzilla-style.

Merging the hard-hitting realities of free-market capitalism with furries and memes isn’t easy. Especially when the use of Pepe – who has bizarrely been co-opted as an alt-right symbol – can be taken the wrong way, even when subverted through a queer lens. Electra explains: “I was really nervous (releasing the video) because it deals with so much complex imagery that, sometimes, people could hastily misinterpret and take the wrong way. Frogs, queer people and TikTok is a whole thing. It’s like how people feel about the Joker and queerness. It’s an example of reappropriating a symbol, even though the elements were already there to begin with.”

Fluent in both the memescape and Theorygram alike, Electra denounces free market libertarian ideas and is a firm supporter of the left. Their work has long combined internet culture with the socio-political. Their Instagram presence is emblematic of this: sigma male grindset memes and catboy shitposting sits alongside analyses of neoliberalism and Dark Enlightenment theory. Their 2020 track “F the World”, for example, explores the loneliness of incels. Set against the aggressive sounds of steroid-injected metal, the video sees Electra skip through a suburban neighbourhood in Christian Girl Autumn attire to unnerving effect.

Their ongoing podcasts and Twitch streams with New York artist and internet researcher Joshua Citarella is an extension of this. Episodes span conspiracy theories and experiments with Super Male Vitality, a testosterone-boosting supplement sold by Alex Jones, while one livestreams a trip to California’s Reagan Presidential Museum and Library. “I got really obsessed with Josh’s work and research into online political subcultures and started watching his Twitch stream and listening to his podcast. Then I invited him to my writing camp over the summer to work on my album, helping come up with concepts, stories, and lyric ideas,” they say. “We have so many overlapping interests that it’s really easy to just pick something we were already talking about or researching and make into a whole episode.”

The collaborative episodes flaunt Electra’s genuine passion about the problems facing the left and young people today: “The left and the Democrats have gotten so lazy with thinking that they can fly their pride flag, or put pronouns in the bio. But as things become more dire, and people become more radicalised in various directions, things become more politicised and more polarised. There will be new manifestations of political identities that we are unfamiliar with, especially from when I was younger.”

“We have to use our imagination to imagine future dystopian scenarios where there are literally gay fascists. It sounds extreme. It sounds crazy. But also, these people exist on the internet and I’ve read their stuff” – Dorian Electra

When asked to elaborate, they add: “We had all these holdover myths about political identity from the past that just don’t hold true anymore. We have to use our imagination to imagine future dystopian scenarios where there are literally gay fascists. It sounds extreme. It sounds crazy. But also, these people exist on the internet and I’ve read their stuff.”

It’s emblematic of the pop star’s terminally online nature, which has earned them a hyper-dedicated fanbase among Gen Z listeners (one particular stan account is named after the artist’s distinctive, pencil-thin moustache, while another is dedicated purely to their fox fursona). It’s unsurprising, then, that Electra’s music is regularly associated with hyperpop, the equally extremely online strain of disruptive, maximalist pop made popular by TikTok videos and Spotify playlists.

While the actual meaning of hyperpop is nebulous – many of the community’s younger members have distanced themselves from the Spotify-coined genre in favour of artist-generated terms like digicore and glitchcore – the Spotify playlist remains an influential platform for showcasing the strains of maximalist, genre mishmash sounds influenced by everyone from PC Music to 100 gecs to Drain Gang.

“The thing that blew my mind and forever changed the way that I saw music was when I first heard Hannah Diamond. And AG Cook, Danny Harle, and SOPHIE. I just liked how extreme it is and how everything’s dialled up to 11,” Electra reflects. “It’s since become cool in the ways that it’s become the default thing that people do. The kind of artists that I’m the most interested in are the ones who are always going to develop their sound and not get stuck. Like, I don’t want people to look back on me and be like, ‘Oh, Dorian Electric got stuck in this one thing’.”

As for their upcoming album, it’s still largely under wraps, though they maintain that it will be “more mature” than previous projects. They flash a grin. After all, “when you can start parodying yourself, that’s the time to move on”.