Having amassed a cult following for their head-slamming live shows, the Baltimore hardcore band distill more energy than ever into GLOW ON, their latest, Blood Orange-assisted album 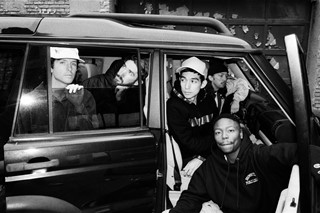 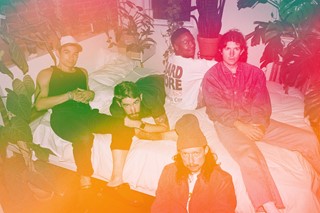 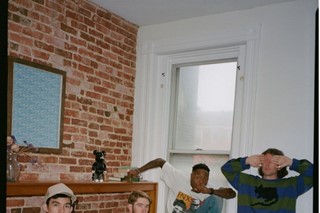 Brendan Yates has a short attention span. The Turnstile frontman, whose vernacular drips with an abundance of casual uncertainties like, “You know?”, and “I guess...”, is telling Dazed about how he wouldn’t be opposed to making an eight-minute song – when he gets distracted: “Woah, I’m just looking at the coolest car I’ve ever seen,” before comparing it to something from an old movie, then continuing: “But I forgot what I was saying. I’m sorry.”

This shouldn’t be surprising, given the Baltimore-based hardcore crew’s new record, GLOW ON, is only 35 minutes long, despite being made up of 15 tracks. One track, “NO SURPRISE”, flashes past in 45 seconds. But then again, no genres seem to cherish brevity as much as hardcore and punk do. “I feel like I’m constantly going from one feeling to the next,” Yates says, trying to rationalise his personal preference for lightning-fast songs. “I can’t sit too long with the same thing.”

Luckily, the band – comprised of Yates on vocals, Franz Lyons on bass and vocals, Brady Ebert on guitar, Pat McCrory on guitar, and Daniel Fang on drums – were already planning on isolating to work on this record together when the pandemic struck. Even though it worked in their favour, Yates notes that some of his peers were creatively stunted by the global shutdown: “It’s kind of this dream scenario. If you were told when you were ten years old that you’re gonna have a couple of years where the whole world’s gonna stop and you have nothing but free time to do whatever you want, it sounds like the perfect thing. But I think it came with a lot of distractions, and a lot of people lacking a feeling of purpose, and a lot of confusion.”

“If you were told when you were ten years old that you’re gonna have a couple of years where the whole world’s gonna stop and you have nothing but free time to do whatever you want, it sounds like the perfect thing” – Brendan Yates

When Dazed suggests that perhaps GLOW ON helped offer the band a sense of purpose during a time where everyone lost their minds because there was nothing to do but think, Yates replies: “It was very grounding. I think everyone found their things that grounded them throughout that process. With everyone being left with nothing to do but think – that ended up amplifying the thought that was going into songs and what I’m singing about. You’re left to think about, ‘What are we doing? What’s important? What’s not? What’s meaningful? What’s not?’ So it’s kind of this big process of that cycle of thought and trying to put it into something positive, which was the goal.”

Artistic restlessness and constantly questioning everything might be the driving forces of Turnstile. Ever since 2018’s Time & Space, the band has been praised for pushing the boundaries of the heavy genre by incorporating synthwave, pop melodies, and a catchy, palatable atmosphere that calls to mind Y2K skate video game soundtracks, all while balancing it with a deep existential weight.

“I think it’s just about making what’s inspiring to us,” Yates explains. “And I think staying inspired is just living and always checking out new music and being open to finding different inspirations, whether it’s through new or old music.” The inspiration in their songs is evident when they put on their hallowed live performances; the effect their music has on their crowds is what every band aspires to.

At their two New York dates in August, Turnstile energised full, sold-out rooms, invoking a mass of people into jumping, pushing, three-stepping, crowdsurfing – all kinds of movement that persisted throughout their entire sets (then of course, there was the infamous pit-shitting incident). While security guards tried their best to prevent stagedivers at Irving Plaza, fans at the Elsewhere show continuously crossed the boundary between the floor and the stage, and became a vital part of Turnstile’s act. At its core, the band are about community, and the gigs are where their listeners get to really play a role in the Turnstile experience as well. As Yates sings in the aforementioned 45-second track: “You really gotta see it live to get it”.

Each track on GLOW ON is as invigorating as these real life moments, from the vivacious, dynamic “DON’T PLAY” to the explosive, addictive “FLY AGAIN.” The record’s diverse sound was aided by Dev Hynes jumping on vocals for some songs, including “ALIEN LOVE CALL” and “LONELY DEZIRES”, both of which have a layer of tenderness with an R&B lilt.

“We were sitting down with songs and seeing his open approach,” Yates says of the collaboration. “Just trying anything, on the go, seeing what works. It was very eye-opening to see how free the experience was and how open it was, as opposed to overthinking anything, or being scared to try anything.”

When it comes to Turnstile’s own songwriting process, Yates finds it hard to pin anything down. “I feel like I’ve tried – over the span of my life – to always challenge my perspective on what kind of rules I might subconsciously have in place, like from when I was younger, or rules that are just put in place by your environment around you growing up, or whatever. I think it’s constantly a process of challenging those things,” he says. “I think really, the base for any good song, in my opinion, is that it feels meaningful to you and can resonate within yourself. Once that’s the only requirement, any kind of genre or expected sound is out the window.”

The band itself hasn’t changed much in this aspect. Retrospectively, Yates notices that the one consistency throughout the years has been this lack of expectation. Since the beginning, they were making music for themselves more than anyone else, and it’s the same now. “It’s kind of weird to say, but any time we make a record it potentially could be the last,” he says. “That’s what I like about it. It’s more of a constant, forward-moving thing that is essentially an outlet to grow with us as people.”

Even if it’s primarily for themselves, their art will continue to impact others in the same way that others’ art impacts them. “I think that’s what’s exciting,” Yates says, “is that everyone’s going to apply their own meaning to things and take away their own things from it and connect to it in different ways, whether it’s only for a minute or for their entire life.” The way that works of art float out into the world to be interpreted by anyone who connects with them is the best reward of all. GLOW ON is no longer just Turnstile’s; it’s everyone’s. So the mystery goes.

Turnstile’s GLOW ON is out now