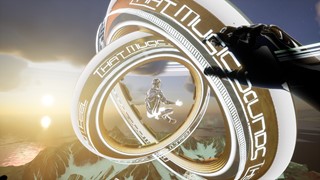 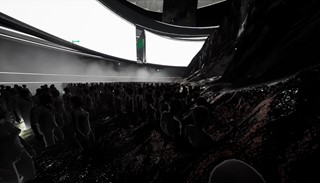 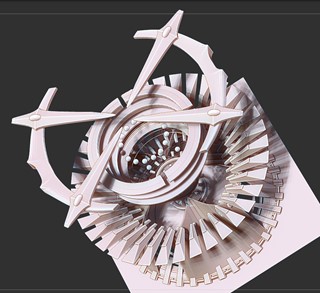 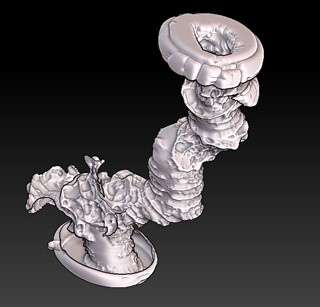 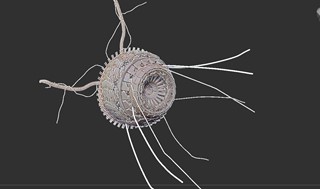 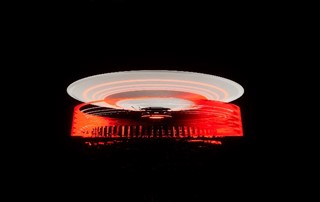 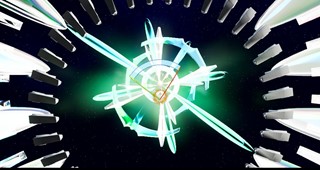 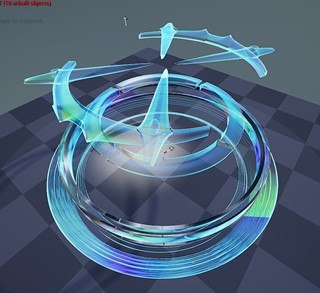 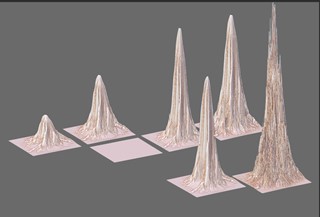 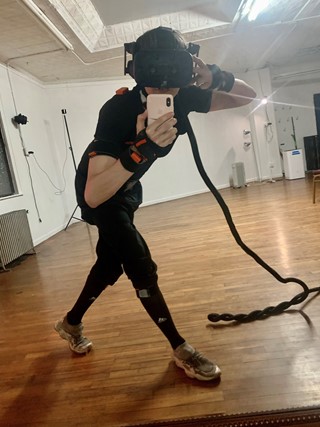 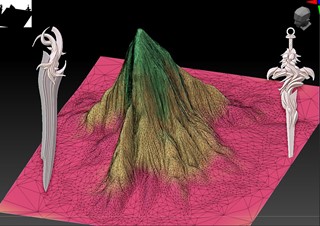 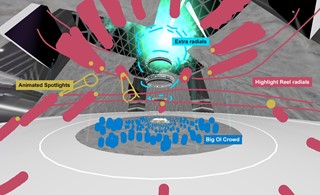 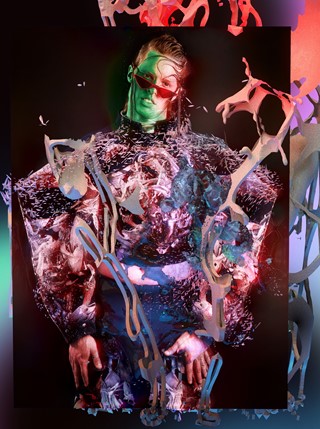 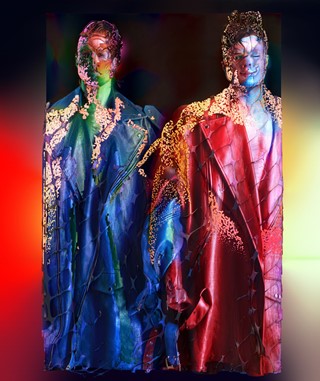 This week on Dazed we explore the high octane, utopian dream world of musician Danny L Harle, his debut album Harlecore, and the magically immersive digital club space of Danny and his fantastical collaborators.

In the right environment, dancing to trance music is a transcendental experience. Through peaks and drops and breakdowns, the melodramatic style of dance music that proliferated across the 90s exalts its revellers into a state of heightened consciousness, a fluchtpunkt where all your dreams, hopes, and imaginations can be condensed down into a single, ecstatic moment. Try watch the myriad of VHS-shot clips of Fantazias and English countryside raves gone by without cracking a huge smile. So when VR artists Andy and Sam Rolfes, known collectively as the Team Rolfes, were tasked with bringing Danny L Harle’s exhilarating, rave-influenced debut album Harlecore to life, they knew they had one mission: to capture euphoria.

Over the last five years, the Brooklyn-based duo has become known for their disruptive digital artworks, which blend together elements of VR, mixed reality, figurative animation, and motion capture to create bewildering music videos and live improvisational performances. A recent music video for Lady Gaga and Blackpink’s “Sour Candy” takes you on a disorientating, playful ride through the cyberscape, while the pair’s live sets at MoMa and Berlin Atonal are discombobulating extravaganzas that incorporate live performance and digital anarchism. Their art plays out in much the same way visually as a video game. Often, they’re loaded with references to internet culture, gaming livestreams, and niche underground scenes, which – combined with futuristic renders and absurdist humour – leave you feeling perplexed, yet bemused. As any artwork, the best way to experience it is to tune in and drop out.

The Rolfes Brothers first met musician and producer Danny L Harle in 2016. They had just finished their first video for Amnesia Scanner, and came on to do Danny’s “Ashes of Love” music video, which also feature Caroline Polachek. The collab set the groundworks for more collaboration on Pang, Polachek’s chart-topping debut album (produced by Harle), and later visual work with the Rolfes. “We’ve known them both over the course of this whole trajectory,” says Sam. “Dan understands our work really well, not just because he’s become a really close friend, but because he kind of gets it but he also gets a person's perspective that’s outside of our like insufferably underground experimental art bubble.”

Upon entering Club Harlecore, the interactive digital club that accompanies the album, the player finds themselves in an industrial lobby, where they can choose from four separate rooms – each recreating the scenes showcased in the music videos. Once inside, players can wander around the interiors of each of the stages, which are built much like a standard club – only, instead of being with your mates, you’re in a room surrounded by faceless, digital revellers. Given that Harle was one of the first artists to perform on Minecraft following club closures, the opening of Club Harlecore feels exactly the sort of bonkers fun and outside the lines thinking you’d expect from the gonzo producer. Besides, what better way to capture the absurd silliness of Club Harlecore than bringing it to life in all its mischievous glory.

So, how do you bring a sound that’s so rooted in the physicalities of the dancefloor to life, especially when being on the dancefloor IRL is no longer a possibility? The brothers needed to take the club’s four resident virtual DJs, DJ Danny, DJ Mayhem, MC Boing, and DJ Ocean, from the drawing board (the 3D models were originally built by CGI artists NotReal_Virtual) and transform them into living, breathing characters. “Danny had some specific ideas of their vibe, like where they’re coming from movement-wise,” says Sam, “but a lot of the practice revolved around the improvisation of space”. They would divide this task into two main camps: the mocap suit, which essentially records the body movements of the wearer so they can be emulated in CGI, and VR puppeting, where you build a model in 3D, rig them up to a VR controller, and control it in a similar way to a marionette. Sam explains, “They’re like a doll in 3D. You set it up and attach it to the VR controller and I’ll have buttons for moving the arms or the face.”

When developing DJ Danny, for example, the pair took inspiration from The Watchmen’s Dr Manhattan – a post-human, god-like character from the DC Comics universe. In the video for “On a Mountain”, a gigantic DJ Danny plays to an expansive stadium audience. He hovers above the stage – part man, part holy trance spirit – glistening in silver, translucent tones. Disembodied hands reach to the sky and, at the track’s clattering climax, a prism of rainbow light explodes across the screen. “These characters are so distilled to their core character type that it’s mostly about how their whole silhouette moves,” explains Sam.

The highest-energy offering comes in the form of the cartoonish MC Boing. Like a Happy Hardcore smiley who’s swallowed some Gatorade, the character is, quite literally, bouncing off the walls. Set against a hyperactive barrade of deranged makina, hyperactive vocals, and heavy-duty kicks, his low-gravity, high-intensity Boing Zone – a blue arena populated with enormous springs that launch revellers into the air with one fell spoing! – is built to reflect this. “Boing was my favourite to animate,” says Sam. “DJ Danny and Mayhem were mostly motion capture, and though Ocean was a VR puppet, she was more flowing and angelic. You had to treat her delicately, whereas Boing is just very rubbery. He’s incredibly fun to just swing around – and you can see that in the visualiser.”

The next animation, DJ Mayhem, is a menacing opposite, a  vicious, muzzled beast, who (literally) hammers out thrashing gabber to devastating effect, Mayhem can be seen stomping around his dungeon – a digitally choreographed routine that was brought to life using a mocap suit. “Mocap suits are already really sweaty and Mayhem is so intense,” Sam explains. “A lot of the time you’re trying to convey the message through your body. Mayhem just involves tensing every muscle in your body and doing it for three hours straight. I carried some weights around because he has a big hammer, it was a crazy workout.”

The high-intensity sounds are offset by DJ Ocean, who brings some restorative ambience to Club Harlecore. This is best depicted in the music video for “Ocean’s Theme”, where Ocean is imagined as a cosmic jellyfish swimming down by the digitally rendered ocean floor, against an aurora polaris of green and purple glowing lights. Like Boing, Ocean was controlled using VR puppeting, though “one bounces like rubber and the other flows like a cloth underwater,” says Andy, “so it’s very different altitudes”. Sam agrees, “Boing’s speed and intensity, while Ocean’s grace.”

“She is a lot closer to the puppets we made for our Lady Gaga video where you have this core body and everything else is beautifully flowing around that,” he adds. “It’s true to their sounds and less about the percussive choreography of just running into stuff and bouncing everywhere. It’s more about creating beautiful, linear forms in space as it goes. Also, technically setting up the puppet in a way that looks peaceful and doesn’t explode. It’s hard to make things 3D that are peaceful.”

When imagining these worlds, it was important for the Rolfes Brothers to strike a balance between the esoterics of the context – AKA creating unhinged visuals for Danny L Harle’s debut album – and appealing to people beyond the core Harlecore audience. “Dan’s been a big inspiration for that, so much of what he does is so layered,” says Sam. “It has infinite references to music history and craft, but his handle on composition and emotion and the feelings of euphoria, their cultural context, allows people outside of your scene to have something to grab onto.”

“The people in those worlds are maybe more likely to get what I’m trying to say in terms of baseline reference points,” he adds. “While I realise that’s fun and that’s what I love, it’s much more powerful to be able to make esoteric and substantial work that has enough contextual stepping stones for someone who doesn’t have the myriad of niche references that you’re building on, so they can understand beyond the eye candy of ‘there’s this crazy, what drugs does this person take?’”. He waves his arms around frantically to demonstrate.

The Rolfes Brothers’ Club Harlecore concept melds perfectly with Harle’s studio album. The digital space thrives with its virtual cohort of fantastical guest producers, and the album’s absurd mash-up of nostalgic dance music subgenres from gabber to hardcore is built to shock and delight, a mishmash of chaotic club concoctions and ambient palate cleansers  that reflect the IRL experience of rolling through a club and its various rooms. Giving listeners-cum-revellers an escape from everyday mundanity, Harlecore offers up new worlds to lose yourself in.