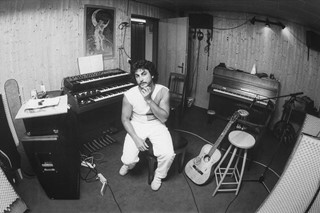 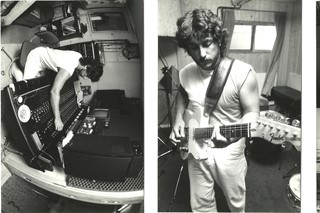 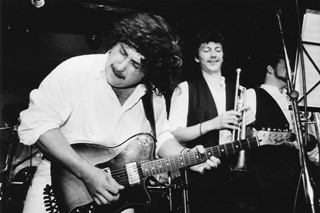 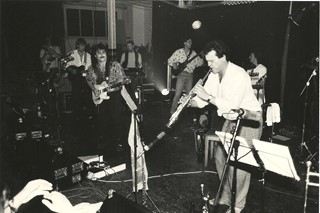 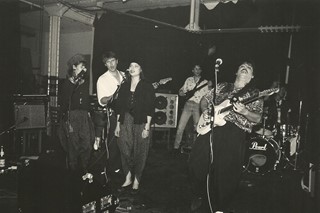 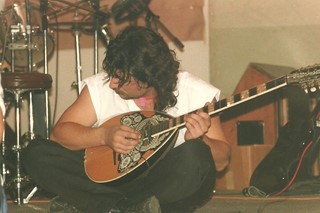 A rolling bassline noodles its way through “Haydi Yallah”, a raging disco track that serves as the opener to Café Türk, a compilation album of the inimitable 80s Turkish-Swiss band. Curated by producer Grup Ses, and released on London-Istanbul imprint Zel Zele, the record is immeasurably catchy; a fusion of new wave, psych rock, and leftfield disco, punctuated with traditional Turkish and Azeri rhythms.

Try searching Café Türk on the internet, however, and you’ll be hard pushed to find anything beyond this most recent release. The band, though popular amongst the influx of Turkish immigrants in Germany and Switzerland in the 80s, fell victim to both the rampant xenophobia in Europe and growing conservatism in Turkey. This, paired with the obvious absence of YouTube and Spotify, meant that Café Türk, along with other diaspora bands, have left very little trace of their existence – unless you’re a keen crate digger with an eye for Anatolian bangers.

The compilation album features a mix of previously unreleased recordings and selected works from lead singer Metin Demiral’s discography. This makes it feels like a time capsule, drawing on both the popular Turkish artists of the time and Anatolian rock pioneers like Baris Manco and Cem Karaca, while also inserting its own unique viewpoint. Born to a Turkish father and Swiss mother, Demiral experienced the fusion of eastern and western cultures firsthand. He grew up in the provincial eastern Turkish town of Kars, where locals spanned Turkish, Azeri, Russian, and Kurdish origins. Later, he moved to Schaffhausen in northern Switzerland, before driving down to Germany, where he sold copies of his self-pressed debut Pizza Funghi to record stores and street vendors by hand.

Demiral created a wholly unique style that fused traditional Turkish and Azeri sounds with the era’s post-punk, disco, pop, rock, and reggae, sitting at the intersection of its cultures, languages, and ideologies. “Playing traditional music with electric guitars, drums, and synthesisers hadn’t been done before,” he tells me. “This wasn’t traditional Turkish music. For me, it felt very natural to move from reggae into an Azeri song, then straight into funk.” “Uzum” and “Zeynep”, for example, showcase the more off-kilter rhythms and varied tones typical of Azeri music, while the syncopated beats in “Samil” are common in Turkey. Put them to a frenzy of electric guitar and woozy synths, and the result is an intoxicating, frenetic sound that gallops its way down your ear canals.

Many of the songs – sung in a mix of Turkish, German, and English – touch on the experiences of Turkish diaspora in the 80s and 90s. “Haydi Yallah”, for example, draws on the famous 17th century Ottoman traveler, who Demiral reimagines as voyaging across Europe – before stopping off at a German club, naturally. Its lyrics (the title roughly translates to ‘come on, let’s go’) parallels the voyage of the nearly five million Turkish workers who immigrated to Germany in the 60s and early 70s to help with the post-WW2 industrial labour shortage. “Giris Serbest” (‘Free Entrance’) recounts the time Demiral was refused entry at the Swedish border for not having the right visa, while “Şöyledir” touches on feelings of alienation as a Turkish immigrant in Germany.

Ironically, the band struggled to get recognition in Turkey. Shortly after the release of “Haydi Yallah” in 1983, Demiral headed to Istanbul with the hopes of spreading Café Türk’s music across the motherland. TRT, the Turkish public TV and radio stations, refused to play the band on the grounds that it was “degenerating” Turkish music. “We had a military coup at the time, so everything was really restricted and censored,” explains Demiral. “All the radio stations were state-owned and you had to send them your lyrics and your song notes, which would be evaluated by a commission who would decide whether your music would be played or not. As you can imagine, they were pretty conservative.”

Café Türk enjoyed relative success across Germany – a member of Nuremberg’s cultural department stumbled across a copy of Pizza Funghi, and subsequently invited Demiral to play at local worker’s unions and, later, German music and venues and festivals. However, the band struggled to get more mainstream recognition in the country, and were heavily affected by Turkey’s censorship of their music. Their stop-start journey mirrors the displacement felt by many members of the diaspora, who feel neither here nor there in terms of their identity. In reviving this previously forgotten slice of history, Zel Zele puts the glorious sounds of Café Türk front and centre, for nostalgic Euro-Turks and music heads alike.

Café Türk is out now on Zel Zele here