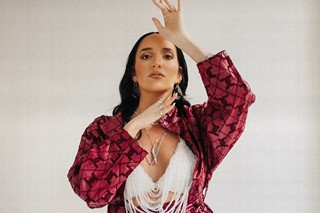 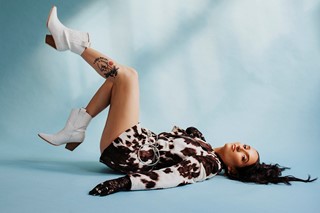 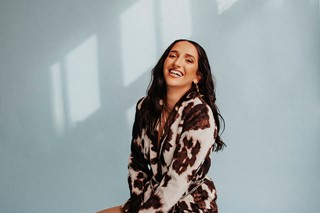 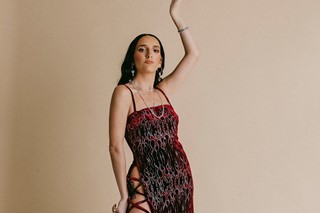 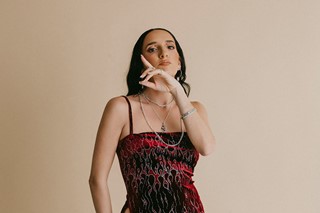 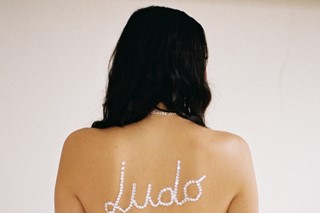 London-based, Italian DJ Saint Ludo plays a mixture of underground club music and hard-hitting rap belters. The energy Ludo brings is high, both on the dance floor and behind the decks. She co-runs the femme culture imprint with Elkka, whose earlier this year released the (somewhat presciently titled) MUAs at the End of the World EP from rising Chicago talent Ariel Zetina, as well as the annual HeForShe compilation, with music from DJ Python, Yazzus, Violet, DJ Boring, and more raising money for United Nations Women.

Following sets from the enormous Alexandra Palace (for Spotify’s Who We Be) to the tiny studio of Balamii Radio, Ludo put together our new Dazed Mix for lockdown listening. She’s also exhibiting a new photo shoot, shot by Paolina Stadler: “I rocked up to the shoot and said straight away: ‘Girls, I am awkward and uncomfortable, so bear with me.’ And not only did they make me look peng, but they also made me feel peng.”

Hi, Ludo! Whereabouts are you locked down right now?

Saint Ludo: I’m in Bologna, northern Italy, which is where my family is from. Been here for over two months waiting for things to go back to normal (???) to return to London. Not the worst place to be stuck, ’cos lasagne, tortellini, etc. are all from here.

What have you been doing to keep yourself occupied on lockdown?

Saint Ludo: I’ve been recording mixes, getting creative with socials, reading loads, exercising, watching rom-coms with my mum, going on virtual dates… you know, the usual. Hadn’t drunk or smoked at all, then yesterday had a beer and shed a tear.

Tell us a little about femme culture.

Saint Ludo: femme culture is a London-based record label founded in 2016 born out of the desire to champion womxn in the arts and push forward-thinking music. Elkka, who I run it with, and I saw so much raw talent around us and wanted to be able to put it to use and see if we could amplify artists’ and creatives’ efforts by starting this label, and four years down the line I think we can say it’s been a fucking amazing ride.

What has the label been working on recently?

Saint Ludo: (Besides the Ariel Zetina EP) We’ve also just put out our yearly compilation in partnership with UN Women, the HeForShe compilation, which this year turns three. It features music from DJ Python, Yazzus, Violet, KG, DJ Boring, and more. As usual, all proceeds and sales are donated to the United Nations Women, the global champion for gender equality. This year the donations from sales will go to making sure that the needs of womxn and girls are recognised and addressed in the global COVID-19 response as domestic violence and sexual exploitation rise as a result of increased social isolation.

What was your route into dance music?

Saint Ludo: As a teen, I used to do loads of odd jobs to make some money, and one of them was to give out flyers. It happened that I was ‘flyering’ for this electronic festival in Bologna called roBOt. I was already going to loads of random raves so I had an interest in club culture, but just didn’t know much about it. They eventually gave me a job as a translator at the festival, so I had to read loads of artist bios and general music press, and that’s where it kinda all started for me. A few years later, I was also super lucky to work at an online ‘alternative’ music retailer, which really broadened my music taste – with rap having always been my first love.

“First time I’ll be DJing in public after this I’ll be emotional as hell, and possibly drunk” – Saint Ludo

What inspires you as an artist?

Saint Ludo: I would never describe myself as an artist – what I do is so silly and mundane compared to people who study and analyse and refine their craft for years. However, let’s run with it. I’m inspired by people, I’m not even going to make up some crazy fancy answer for this. I love making people laugh, sigh, dance, feel exhilarated and up, inspired, etc. My friends know I’m big on pep talks, whether it’s for happy or sad reasons. I love getting a reaction off people and watching the whole action/reaction system unravel. And if I can do that through social media silliness or DJ sets, and by literally just being myself without trying to look or sound like a specific set of people, then I’m good. Like, proper good.

How would you describe your DJ style?

Saint Ludo: It’s a mixture of everything I like, and as it is for many people, it doesn’t all sit in one group – or this case, genre. It’s definitely high energy DJing; even the slower BPMs I play are still fast in terms of tempo. And I really like to play stuff that unexpectedly twists and turns, so a refix that randomly drops in a super surprising way will really get me hyped.

Who would be your dream b2b set?

Saint Ludo: It would have to be someone super random that doesn’t DJ. Like, b2b with Obama, imagine that – Democrats getting turnt in the queue. That would be a good day.

Tell us about the photo shoot we’re running alongside this mix.

Saint Ludo: More than telling you about the photos, I wanna shout out the women that made it come to life! Paolina Stadler, who directed and photographed the whole feature; Changlenee who styled it; Liz Parkinson on the make-up; and Imogencie who assisted on the styling. I rocked up to the shoot and said straight away: “Girls, I am awkward and uncomfortable, so bear with me.” And not only did they make me look peng, but they also made me feel peng. Love to them for that.

What’s going on in this Dazed Mix?

Saint Ludo: There’s a lot going on in this mix, that’s what’s up. I started off with an Unknown T sample over a track by Ehua which we released on femme culture a few years ago, and listening back I was thinking – “Damn, is this beginning too strong or sudden? Do I need an ambient intro to make it smooth and cool?” And then thought, “Ahhhh, fuck it. Let’s get them shook from the get go.” So here’s an hour of random stuff from grime to bass to house to drill, all pieced together from my teen bedroom in Bologna.

What do you think the first rave back after quarantine will be like?

Saint Ludo: Just a bunch of people crying and hugging from relief. Like, metaphorically hugging, unless there’s a vaccine already out and we know we’re safe. But I can only speak for myself – first time I’ll be DJing in public after this I’ll be emotional as hell, and possibly drunk, ’cos you know what it is.

Are you working on anything new at the moment?

Saint Ludo: I’m ‘working’ on an Instagram series called Quarantinder, where I go on dates with people around the world on IG Live. And I ask outrageous questions that we all wanna know because we’re filthy animals. Lock in every Monday on my Instagram at 6pm UK time. Here’s my shameless plug but, it is what it is.