Inspired by death and philosophy, the musician’s genre-defying debut album aims to embody what it feels like when you stare at the sun for too long 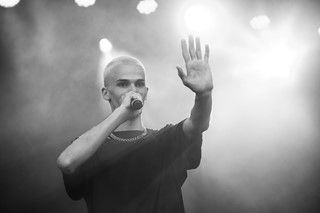 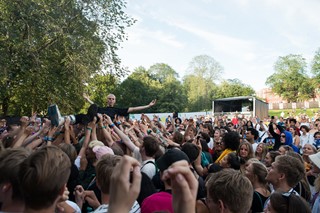 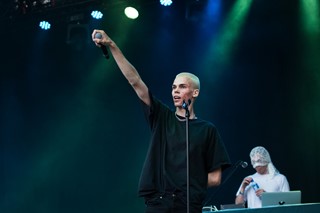 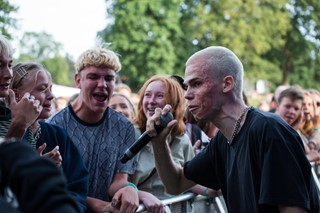 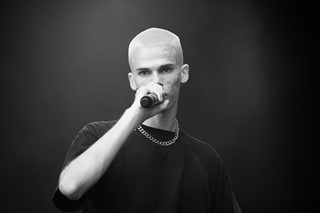 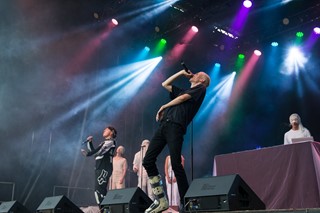 Pen Gutt and I have both sprained our limbs. I stupidly fell off a pub bench; his story is much cooler than mine. “I was at a gig in Trondheim,” he tells me as he heaves his bandaged leg onto the chair in front of us. “I stage-dived during the first song, but afterwards the crowd dropped me into the photo pit and I twisted my ankle.” And how did he carry on the show? “I just drank some beer and thought, ‘Fuck it’.”

This reckless abandon is reflected the day after we speak during his riotous debut performance at Oslo’s Øya Festival. Dressed head-to-toe in black, save for his bleach blonde hair, and with his ankle now strapped into a customised, glittery ‘Pen Gutt’ boot, the rapper glides through the roaring crowd on a sea of outstretched hands. There’s something different about Pen Gutt today though, the musician has a burn covering the entire left side of his face. “It’s a burn mark from staring at the sun – metaphorically speaking”, he tells me after his performance. “It comes from a book I read called Staring at the Sun: Overcoming the Fear of Death, and its concept: ‘To stare at the sun simply means to face death head on and let your fears become a part of you’.”

Pen Gutt is the creation of 24-year-old Håkon Stubberud, and literally translates as ‘pretty boy’, stemming from the rapper’s background in modelling (“it was either going to be Pen Gutt, or ‘Zoolander’,” he laughs). Stubberud was never meant to be a musician, and yet frequently found himself writing songs in his head as he wandered his small Norwegian hometown. After writing comedy songs at school and underground football league chants, the fledgling musician was sent a handful of beats by producer (and now his album collaborator) Erik Samkopf, and just started writing.

Reluctant to fit into a genre, Stubberud’s music is often hard to define. Spitting in his native tongue, the rapper reflects on love, death, and philosophy over infectious beats and dizzying hooks, and traverses soothing conversational interludes, biting rap, and melodious choruses. His songs are also regularly accompanied by captivating videos, most notably for 2018 single “Independent”, which sees Stubberud beguilingly sing down into his phone camera as he walks the winter streets of Oslo.

Though influenced by the darker sides of life, light frequently glistens through in Stubberud’s lyrics (“If the world collapses, just dance”), as well as in the name of his debut album Hold Deg | Varmen, meaning Keep Warm, which is due next month.

As the summer sun sets in the backstage area at Øya Festival, Pen Gutt discusses his forthcoming album, his love of villains, and how you can never prepare for losing a loved one.

When did you start making music?

Pen Gutt: I was a photographer for a long time, and made music videos. After I’d done it for three years I just got sick of doing work for others because you present an idea to an artist and if they don’t like it you end up compromising and doing other ideas. I wanted to do something of my own.

How did you come up with the character of Pen Gutt?

Pen Gutt: I made Pen Gutt from my modelling background. If you build a fictional character around you, you can get away with saying things you don’t actually mean because in the character’s universe, you make your own rules. In the album there’s a lot of things that are me, but I try to make it spacious and weird so it doesn’t need to be realistic at all.

When you’re on stage, do you feel like you’re yourself, or performing in a character?

Pen Gutt: Both! I really like to go into character and lose myself in the act. I’m me, but I’m also a guy who likes being characters. On stage I get to be that guy without anyone questioning it – you get to be dead serious about things without people telling you to stop joking.

“If you build a fictional character around you, you can get away with saying things you don’t actually mean because in the character’s universe, you make your own rules” – Pen Gutt

How would you describe your music?

Pen Gutt: I actually have a new way to describe it – it’s bedroom pop for people who can’t sleep. There’s a lot of thoughts you get when you’re trying to sleep but you can’t; you start to think of things that can be dark and philosophical, and you get sad and irritated. (My music represents) the feeling you get when you haven’t slept that much and everything feels over dramatic.

An insomnia genre! Obviously I don’t speak Norwegian, so what do you actually rap about?

Pen Gutt: I rap about love a lot, and there’s a lot about Armageddon – it’s like doomsday music. I rap in a way that says ‘let’s do this, because it’s now or never’. It’s about life and death.

I’ve heard you wanted to write an album about what it feels like when you stare at the sun for too long. What do you mean by that?

Pen Gutt: It’s about being really into the dark things inside you. Staring at the sun is just a metaphor about looking death in the eye. I’ve always been interested in villains and James Bond movies – I like the villain in The Avengers who’s going to kill half the universe. I know it’s fucking evil but those thoughts are striking to me because it’s a character and there’s something interesting about people who have an agenda. I don’t gravitate towards dictators in real life, but in the fictional universe I’m into dark stuff.

One of my biggest inspirations is Lana Del Rey; “Born To Die” is so beautiful. There’s something about those grand questions about life – it’s really sore and hard to take in. Not everyone wants to talk about it but we are born to die, the only thing we know is that we’re going to die someday. I really wanted to dig deep and see what my fears are, why I fear them, and how I can use that to my advantage. I want to show people that life is fucking scary but you can actually do it.

Do you think you achieved that with the album?

Pen Gutt: No, I haven’t achieved it because it’s one thing to write about it and another thing to experience it. It’s a bizarre situation with my album because I really dug deep with the whole death thing, then my father died.

I’m so sorry. Was it sudden?

Pen Gutt: It was quite sudden, but we knew there was something happening. He told me that he didn’t know how much time he had left, so we were thinking about it. But when it hits you, it hits you like a fucking rock. You can’t prepare for it.

You finished the album before that happened – did you change it?

Pen Gutt: No, I didn’t change it. It started to make more sense to me, and meant more to me after that. The thing about making this album is that (death) was always something I was going to write about, but the most important thing was actually experiencing it. Things I talked about on the album are actually happening now.

I’m doing stuff I’m scared of now, like being on radio and playing live, but I just want to go into these things and see what happens. Whether I fail or cry, I want to experience it. Huge risks can bring great successes. I come from a religious background – my family was Christian but I was never religious – and I’ve now got really religious in a spiritual way. I understand there’s something connecting us now; when I’m doing a concert and all these people follow my hands, I realise there’s something bigger than me. I feel like a preacher or something.

Musicians are often god-like figures for their fans.

Pen Gutt: You need someone to idolise, someone you can ask questions and listen to. You have to have something you can gravitate to.

Exactly, and social media has obviously enabled fans to directly engage with their idols. Your videos for “Bare Dans” and “Independent” actually feel heavily influenced by social media. How do you feel about being constantly online?

Pen Gutt: People don’t seem interested in things that are actually happening; they like being entertained and having fun. People demand entertainment because they don’t want to be bored for a second. If you get sad thoughts, you can just take out your phone and you don’t have to think about it – that’s one of the reasons I think it’s bad because you don’t realise the shit you’re not dealing with. I have friends who don’t have Facebook and just have Nokia phones; it’s so nice to be free but it’s also fucking fun to be on your phone.

Going back to your music, does it feel important for you to rap in Norwegian?

Pen Gutt: I get more meaning from it. I listen to Rosalía and French rappers PNL, and there’s just something more beautiful about the mother tongue. You have to figure out a way to make it interesting with melodies and videos so you can grasp people from all over the world. (Rapping in Norwegian) makes my music more intimate for (my fans) – you have a connection to it, and it becomes more special for those who understand it.