The idol group handpicked their members and write and produce all their own material – could they signal a shift in the industry’s power dynamic? 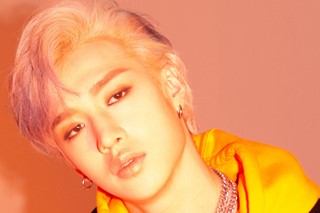 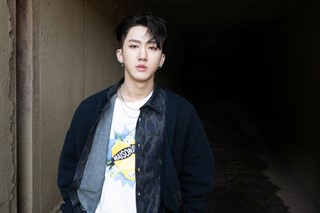 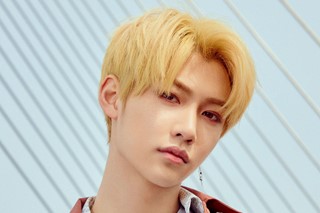 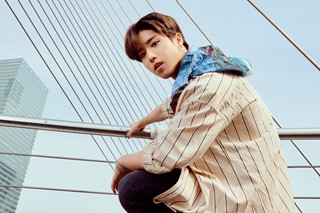 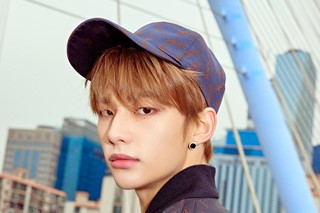 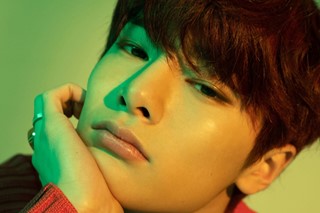 The South Korean pop band Stray Kids are clustered around a laptop for a Skype interview, pale in the screen’s glow as heavy rain turns New York City to grey. It’s a fitting backdrop for the group: from their 2017 pre-debut release “Hellevator” to the latest single, the snarling, trumpeting EDM of “MIROH”, the K-pop group have made similarly dystopian environs their visual backdrop, where neon and CCTV screens flicker and the group are hemmed in by skyscrapers, tarmac, and tunnels as they attempt to escape or defy their surroundings.

This concept – of attaining freedom – is central to the group, and it’s an idea that’s rooted in reality. The group’s leader, Bang Chan, handpicked each member for the group from their parent label JYP Entertainment’s roster of trainees, a process unheard of in K-pop, where that power lies with executives and creative directors. Stray Kids write and produce all their material, too, and are one of the few idol groups to do so. Their music focuses unflinchingly on their youth – the anger and frustration, the ecstatic highs and ragged lows – while questioning their own shifting sense of identity.

With bleached bangs falling into one eye, Bang Chan recalls not the gravitas of the opportunity to form his own group, but the pressure of picking wisely. “There was a lot on my mind,” says the 21-year-old, speaking during the band’s run of sold-out North American concerts. “Choosing the right people was a must, because I’m going to be with them for a long time. Because I’d been a trainee for so long,” – seven years – “I think I had the ability to figure out what potential they had.” He turns to his bandmates and namechecks them: Woojin, the eldest at 22; Lee Know; Changbin; Hyunjin; Han; Felix; Seungmin; and the youngest, I.N, who turned 18 in February. “With everyone around me right now, I’m really glad we’ve become this team.”

Bang Chan and 18-year-old Felix, whose cavernously deep voice is at odds with his Bambi-innocent looks, were both raised in Australia, and the broad twang of their accent conveys a cheerful, anything-is-possible resonance. It’s the former who helms the conversation. He’s an engaging speaker and a careful listener, stopping to translate questions for the non-English speakers. At times he falters, and at others he deflects to well-worn answers (a reflection of their newness), but he’s unmistakably a leader, a role he wears effortlessly.

As a whole, Stray Kids are known for their friendly, indefatigable rambunctiousness, but with nearly a dozen rookie awards and five EPs in just over 12 months, it’d be foolish to underestimate their tenacity. Their start was a baptism of fire. On Stray Kids, the eponymously-named survival TV show that they were formed through, they were required to write tracks and perfect performances to short deadlines, then ruthlessly critiqued by the CEO of their label, JYP Entertainment. Two of the group members, Felix and Lee Know, were initially eliminated, although eventually reinstated in the final episode via a public vote. Felix, axed due to his less-than-fluent Korean, hasn’t forgotten the sting. “I still think about my Korean and how I use the language,” he sighs. “I try to learn, and fix it.”

You can see his determination when Stray Kids appear on Korean variety shows to showcase their work and their personalities. Felix’s shyness in speaking had resulted in less camera time but, in recent months, his studying has appeared to pay off and he’s a far more confident presence, able to convey the charm that's endeared him to their fans. It’s the result of constant help from his bandmates, he says, radiating positivity (which is, delightfully, Felix’s default setting). Lee Know, however, who’d had only a short idol training period and was cut early in the series, favours a more stoic approach. “I think I’m here thanks to that feedback. I worked really hard then, and I’m still trying to work hard now too,” he says, and although his small smile seemingly hints at something more pronounced, he settles on a double thumbs up and sits back.

“Choosing the right people was a must... With everyone around me right now, I’m really glad we’ve become this team” – Bang Chan, Stray Kids

Their rough-meets-polished sound was set up by the darkly anthemic “Hellevator”, but the thundering EDM and guitar riffs of their official debut, “District 9”, cemented them as a fresh force in K-pop. In its music video, they flee a clinical-looking prison and use a school bus to smash through to the safety of the titular District 9, although even there they’re left searching. “I don’t know who I am, it’s frustrating, it always worries me / Answer me, then give me an answer that will clear it all,” Hyunjin raps with a volatile urgency.

This ceaseless quest weaves through last year’s EP trilogy (I Am NOT, I Am WHO, I Am YOU) and into their latest EP, Clé 1: MIROH, the clear narrative allowing for sonic experiments (from the minimalist electronica of “3rd Eye” to the bright pop drawl of “Get Cool”) without losing momentum. In their song “NOT!”, they celebrate breaking out the “system” – the status quo – and the strength of being different. For Stray Kids, this is more about ambiguous storytelling than holding a deliberate ’us versus them’ mentality. “We usually don’t compare (ourselves) to others,” says vocalist Seungmin, in English. “Like in the song ‘My Pace’, we’re saying we don’t care about others’ (achievements), we’re just talking about Stray Kids’ own way.”

While Stray Kids have definitely created a richly empathetic musical tapestry, their chosen path raises a pertinent observation: in breaking out of one “system”, they’ve joined another. The idol system that they’re now a part of often appears more restrictive than the one they leave behind, and as they move towards the bubble of fame and money, there’s also the potential to lose a sense of oneself. Both feel paradoxical to their story. Bang Chan pauses. “Well, honestly, we wouldn’t call it a system, let’s say a ‘world’, and we’d call it a decision that we made. In order for us to get out of the main system, we chose being idols, and through K-pop we can show the message we want to express.”

Han, the 18-year-old rapper, singer, and songwriter/producer, drapes himself, cat-like, over Felix’s head and neck to get close to the camera. “I think fame and success can be dangerous to a person, depending on how they feel about it, but we’re going to try to always be positive and good natured about it,” he opines, gesticulating rapidly. “We’re still lacking so much, but we’re going to try really hard to understand other people’s feelings and be a good influence.”

Given Stray Kids’ formation, creative freedom, and growing success makes them something of an anomaly, might their presence provoke change in the idol world? Bang Chan furrows his brow. “I suppose so,” he says with the questioning tone of someone presented with an unfamiliar concept. “I guess it’s up to how people take it in.”

Stray Kids, evidently, have been more preoccupied with looking inward, and, when examining their new EP, it’s apparent their gaze has been in flux. Clé 1: MIROH, which Bang Chan describes as “us being really confident because all nine of us are together”, presents a new fearlessness on tracks like “Boxer”, “MIROH” and “Victory Song”, where Han triumphantly raps:“A laidback victor, a smile spreads on my face / Who else is like me, there’s no one.”

“When I was becoming a singer, some people didn’t support my dreams, so I was sad. I remember that and put those feelings into this song” – Changbin, Stray Kids

They pose fewer existential questions than on previous EPs, but, says Bang Chan, “if you look at tracks like ‘Chronosaurus’ and ‘Maze Of Memories’, it shows nervousness or anxiety, and a feeling of being lost as well.” The latter, its doomy hip hop propelled by tense piano and bursts of foreboding strings, was an emotional outlet for their silver-tongued rapper, Changbin. “When I was becoming a singer,” he says, in English, “some people didn’t support my dreams, so I was sad. I remember that and put those feelings into this song.”

Yet despite sieving emotions and thoughts through the music, their biggest questions, says Changbin, remain unanswered. “But we’re trying,” he smiles. He points to the close presence of their fans, known as STAY. “Maybe we can find the answer soon, through STAY.” How does he intend to discover deeply personal epiphanies through others? “I’m young and lack a lot of experience,” replies Changbin, reverting to Korean. “There are still a lot of childish elements about me as well. By watching those around me, I can find out what I like through them. I feel like I can find myself through (others’ journeys).”

For now, Stray Kids simply continue doing what they’ve done so well thus far – capturing the human condition, including tackling difficult subjects like depression (“Hellevator”), anxiety (“Rock”), and negative thoughts (“Voices”), all of which, Bang Chan says, they’ve experienced first-hand. The group’s core writing team (Han, Changbin, and Bang Chan, together known as 3RACHA) have not only refined their style over the past year but, according to I.N, “improved on their speed of making songs. They’ve gotten really fast,” he says with a sunny grin.

3RACHA’s Soundcloud days are far behind them, although, to their credit, they haven’t deleted the handful of songs that were posted pre-debut. Some will remain just enthusiastic learning curves, but others were raw and powerful, such as “Broken Compass”, which was refashioned into “Mixtape #4” for Clé 1: MIROH.

The “Mixtape” songs, which are only found on the physical versions of their EPs, are where, Hyunjin says, “we all contribute, and fill our individual verses with our personal stories”. In January, 3RACHA revisited a few songs during a Vlive broadcast, and cringed to the point of sweating profusely. As Changbin and Han crease up, Bang Chan covers his face, mock-groaning. “We can’t listen to them now!” But there’s a glint in his eye. “We do have to do episode two of that,” he adds, grinning.

It’s not just the songwriters who are evolving; from being wide-eyed, ambitious and nervous trainees who didn’t always get along, as Hyunjin recently revealed, Stray Kids have become compelling performers with close bonds. They’d clung tightly to Bang Chan during their survival show, but do Stray Kids today feel less lost – or at least more secure in their responsibilities? “I’ll just leave the room so the guys can talk more freely,” jokes Bang Chan, even as Changbin, owner of a bone-dry sense of humour, simply yells, “No!” Vocalist Woojin leans in. “He was very good to us while we were filming the show. At that time we always followed him very well, and relied on him a lot.”

“I don’t have a lot of confidence but when he’s next to me, I know I can do this,” adds Felix, as they ready to depart for the next schedule in a packed day. “But,” Woojin says, “now we’re all developing our own selves, too.”