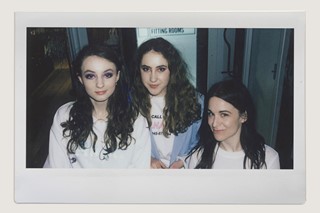 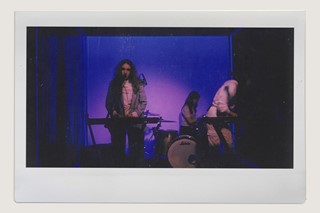 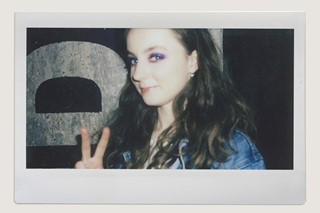 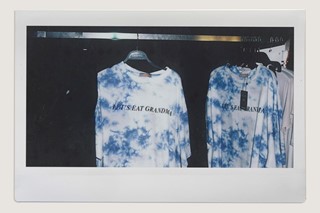 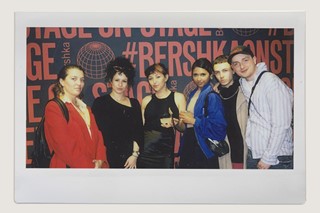 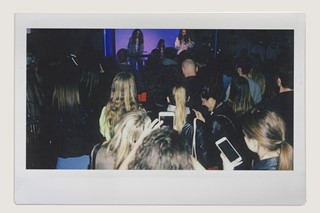 The girls were playing off the back of their debut Coachella appearance – a crazy experience, as Hollingworth puts it. “We spent two weekends there, and I still don’t know anything about it,” she says.

The Bershka store was transformed, its walls plastered with posters of Walton and Hollingworth’s faces. Crowds poured in over an hour before the group played, with Let’s Eat Grandma live drummer (and Savages member) Fay Milton taking to the decks to energise the crowd with a DJ set led by women artists, including tracks by Peggy Gou and Billie Eilish, and bangers from Let’s Eat Grandma’s Bershka playlist.

With the store’s clothing rails swapped for a stage – taking the form of a futuristic neon blue box – Walton and Hollingworth dove straight into rapturous “Hot Pink”, in head-to-toe Bershka, as the crowd belted every word back at them. Adamantly bringing electric party vibes to the intimate in-store, the duo followed their thundering opening with shimmering pop tunes, “It’s Not Just Me” and “Falling Into Me”, interspersing their set with synchronised dancing and schoolyard clapping games.

Concluding with 11-minute behemoth “Donnie Darko”, the whimsical duo lay flat on the ground, playing their instruments from the floor – a trademark of their live performance of the track – before recruiting fans to join them on stage for the hazy finale.

Speaking after the show, the duo reflected on their ever-evolving performances. “I think they (the sets) have two halves,” Walton muses. “It’s like party vibes at the beginning, then it gets a bit sad, and then right at the end it’s party vibes again.” Though last night, where typically melancholic piano track “Ava” would mellow the mood, the set remained euphoric. “Even though we programme the songs the same,” Hollingworth explains, “they do kind of turn out differently depending on the crowd.”

Since their 2016 debut, Let’s Eat Grandma have built a special rapport with their fans; their dizzying pop forming a community of young people navigating an increasingly puzzling world. Their Bershka collaboration is a direct nod to this relationship, with their graphic tote featuring fans’ favourite lyric ‘we got this’, as Walton explains: “I think it resonates as a self-belief thing, (an assertion) that everything will be fine.”

Let’s Eat Grandma’s show is the first of six live events at stores across six cities, as part of On Stage // Of Stage, curated by Dazed and Bershka – watch this space for further announcements.